Why are there no Mass Catchers?

When moving around in space you have to spend delta-v to accelerate and decelerate, which necessitates having an engine and control system. It would follow that a mass "catcher" would be a key piece of space infrastructure to get in place ASAP so that you can just shoot stuff at it. That way you could incrementally build something up much more easily.

From my understanding of the current state of technology we should be able to set up a "catcher" of some kind as a statite at Earth-Sun or Earth-Moon Lagrange points with some combination of a solar sail and ion thrusters but I can't seem to find any missions to that end.

Is it because no one wants to actually manufacture things in space or am I missing a key limitation(s)?

Edit: @cmaster is correct, I should have provided more context and my assumptions.

Assumption : You want to make a space thing on the cheap.

The situation I'm envisioning is as follows:

You want to incrementally build a facility. It's impossible to build all at once so you want to do this over multiple launches.

The ISS was a full human-crewed facility and govt sponsored so economics were ignored. However (from my understanding) the cheap way to incrementally build a facility is to rideshare each time and pay the minimum per kg for small payloads. It's also ideally fully automated with no pesky humans, and as small as possible. Multiple launches over time also lets you also benefit from launch costs going down as technology improves.

You'll need to keep feeding it both raw material and new robots, and you'll either get those from future moon/asteroid mining or future Earth launches. In either case every delivery will have to get from the rideshare drop-off/point of extraction to the facility. If you don't have a catcher you have to send delta-v with you from earth at least to decelerate once you reach the construction site.

Also whenever the future space mining gets underway you're immediately ready to accept raw material deliveries, there's no need for them to send a delivery vehicle of some kind.

This is the process by which I see actually economical space construction happening in the future. Is this reasonable? If so am I correct in assuming a mass catcher is a logical first step?

Update: Turns out that there was some work on passive mass-catching in space after all!

Original answer included below, after the break.

The relevant work which at least mentions this is Space Settlements: A Design Study (PDF), put together by the Ames Research Centre and Stanford back in the dark ages of 1977.

There's slightly too much text to copy into this answer, but you can read it for yourself in Appendix L of chapter 4 of the linked paper, found on page 73. The masses involved here are just lumps of raw materials which you don't mind having energetic collisions with. This approach is obviously not suitable for finished materials, or anything else that might be unduly affected by a sudden stop from speeds of several hundred metres per second or more. 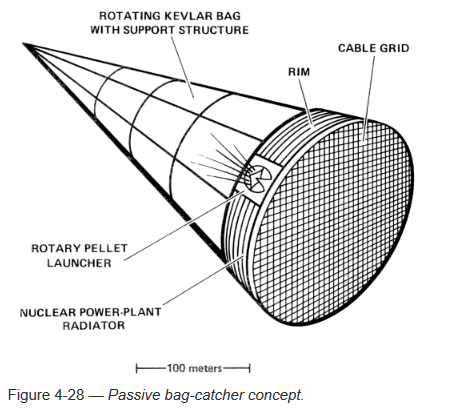 The rotary pellet launcher is a station-keeping engine that uses small pellets of rock (taken from previously-caught payloads) as its reaction mass, so as to avoid the need for refueling from elsewhere, or for the catcher to include some kind of fuel refinery. It is described elsewhere in the linked paper.

Two different designs for passive catchers, although rejected for the baseline, were considered in some detail. Figure 4-28 illustrates one version of a passive catcher. It consists of two major parts: a slowly spinning bag of Kevlar fabric, and a non-spinning rim which contains power, propulsion and other necessary systems.

After the incoming masses arrive within the 100 m radius of the target area, they strike a grid of cables across the mouth of the catcher and break up, thereby releasing a spray of fine particles and small gravel-size rocks which fly inward. These particles strike the bag at up to 200 m/s (23 ply Kevlar stops 44 magnum bullets fired point blank) and come to rest against the surface of the bag where they are held by centrifugal force thereby preventing them from drifting free and escaping from the mouth. Uncertainty about achieving the accuracy of launching required for this catcher, and also some doubt about whether the material would break up and be contained as planned, led to the rejection of this alternative.

A simpler option involved a 500 tonne disc of some energy-absorbing material, such as a plastic foam or glass-fibre composite. Stuff just lodges in it and can be dug out later when the disc is harvested. The battered disc could be melted and reformed for reuse.

There's a more general class of offboard propulsion of which a "catcher" might be one type. You could call them "pushers", perhaps. I can see two different kinds of "pusher", each of which has its own specific problem, but both boil down to TANSTAAFL.

One kind imparts momentum to the pushed object but also experiences recoil itself... one example of this would be the MagBeam proposal. In this case, the pushed (or caught) object doesn't need to carry any significant amount of power generation capability or reaction mass, but in return the system that is generating the beam needs both reaction mass for the beam and some way to stabilise its own position or orbit. From the linked NASA page:

The other kind provides power but no momentum, allowing the pushed object to benefit from high power engines without the need to carry its own substantial source of power. An example of this might be laser ablation (which might include things like DE-STAR and laser brooms) or laser thermal rockets. The pushed object needs to carry a suitable supply of propellant for the laser to operate on (which may, in fact, be the same material it is made of).

In both cases, the propellant has to come from somewhere... the presence of a catcher or pusher doesn't remove that requirement. Moreover, it still requires the target object to have some kind of equipment on board... a minimum amount of power and smarts and so on. Whilst cost savings may arise, and you may end up bringing less mass out of deep gravity wells, neither of these systems makes moving bulk stuff around in space particularly cheap or simple by themselves.

Once you've got the ability to exploit off-Earth resources, potentially even just in the form of rocks, you have an energetically cheaper source of propellant that lifting it from Earth and your space-based infrastructure may begin to look more economical for moving around stuff in bulk.

This is the process by which I see actually economical space construction happening in the future. Is this reasonable? If so am I correct in assuming a mass catcher is a logical first step?

It isn't obviously the logical first step... the underlying problem is that we have a bunch of untried and untested and theoretical technologies with problems that haven't been worked out yet. There are ongoing attempts to make conventional spacelaunch cheaper, for example, and other more grandiose plans like non-rocket spacelaunch. Presumably one or more of these plans will eventually bear fruit, but it is anyone's guess which will come first or which will end up being the best solution.

I note that O'Neill's classic habitat was intended to be constructed using materials launched from the moon by massdriver. Each payload would have had a suitable propulsion system attached to it to enable it to be parked in a useful place after launch. Same goal as you're thinking of, but none of the need for catchers edit: this turned out to be incorrect: the original design was for small unpowered projectiles that would be caught passively!

Not the answer you're looking for? Browse other questions tagged spacecraft economics or ask your own question.

49
Why are there no spacecraft rotating for artificial gravity?
11
Payload mass scale economy
0
Local expansion measured, near zero via Lunar Ranging - what about deep space probes?
39
Why do we not fly to space with helicopters? What are the practical altitude limits?
34
Why are the recent flights of two billionaires discussed in terms of space travel?