How do cubesat owners first find out their cubesat's initial trajectory? How do they point antennas at it before official TLEs start to appear?

When cubesats are first deployed it can sometimes take several days before they start appearing in official TLE distributions, and even then if many were deployed it may take a lot more work to decide which one is which.

Other Problems keeping track of satellites:

As far as I know, cubesats don't (yet) have digital license plates that can be read from the ground (easily). So in some cases it may be necessary to exchange some data before some TLE's can be associated with a specific satellite name. One way to establish that is to make radio contact with a given cubesat.

There may be other operational reasons as well for why you might want to start trying to talk to your cubesat as soon as possible.

Question: How do cubesat owners first find out their cubesat's initial trajectory? How do they point antennas at it before official TLEs start to appear? Do the launch providers share any trajectory informaion? If so, what is the format?

In my experience, there isn't currently a good solution for this, especially for amateurs, hobbyists, or small commercial operators. These groups often fly small satellites on rideshare missions. For smallsat rideshare, there are a so many uncertainties that removing tracking uncertainty is really important

On the last point, I first thought the official TLEs would be organized in deployment order, but they aren't. While the mass is definitely known, the drag coefficient probably isn't, and the density of the atmosphere the satellite flies through at the correct point in time definitely isn't well characterized. As a result, the order of the satellites in orbit may not match the order of deployment.

With so many uncertainties, reducing the uncertainty around satellite tracking is really important, especially for rideshare missions. The best way to do that, is to begin attempting communications immediately after launch, when the satellites are still relatively close together. That way, you can point to one and be fairly confident that you're pointing to all of them. As days pass, the satellites separate and the total search area becomes unmanageable.

I've been involved in two separate CubeSat launches so far and both times we have been given state vectors after launch. I was loosely involved in the BYU PICs launch operations (I had graduated and left the team before) and my company, Care Weather, recently launched it's first satellite, Hatchling Veery. I'll include a few examples at the end of this post. Both times, immediately after launch, we manufactured TLEs. Both times, our TLEs had errors due to inane complexities in the definitions of the coordinate systems or epochs used.

Everyone I know involved in satellite communications produces TLEs from state vectors between launch and issuance of official TLEs. On the ELaNa XX mission with Virgin Orbit, we had an extensive email chain as people tried to iron out issues with their TLE calculation and the SatNogs forum was sharing manufactured TLEs for early tracking as well.

There is a lot of wasted effort and inefficient collaboration at this point in the process and it contributes to space debris by resulting in some satellites to never be identified. The BYU team actually had confirmation that PIC-A and/or PIC-B was not DOA as the satellites' camera flash was seen by the rocket camera. However, the PICs team dealt with all of these uncertainties (and more) and was unable to make contact in the early stage. They are still trying to make contact, but more than half of the ELaNa XX satellites were never identified, so there's like only a 25% chance that they're looking in the right spot. Combine that with most passes being low to the horizon and the chance of contact being made now, even if the satellites are still operational, is slim.

Here are a couple examples of state vectors as given by the the launch provider on each mission. There is no standard on state vector contents, so some were easier to work with than others, but some aspect of the delivery created headache for TLE generation on both missions.

The polar cube team shared their state vectors on the SatNogs forum right after deployment.

Rocket Lab "They Go Up So Fast"

Rocket Lab gave us their official TLEs shortly after deployment. They had given us predicted state vectors and a trajectory analysis document long before the launch.

So the cubesat owners may use the latest trajectory information from the launcher as initial trajectory of their cubesat before official TLEs start to appear.

A diagramm from EXOLAUNCH about the EXOpod cubesat deployer. 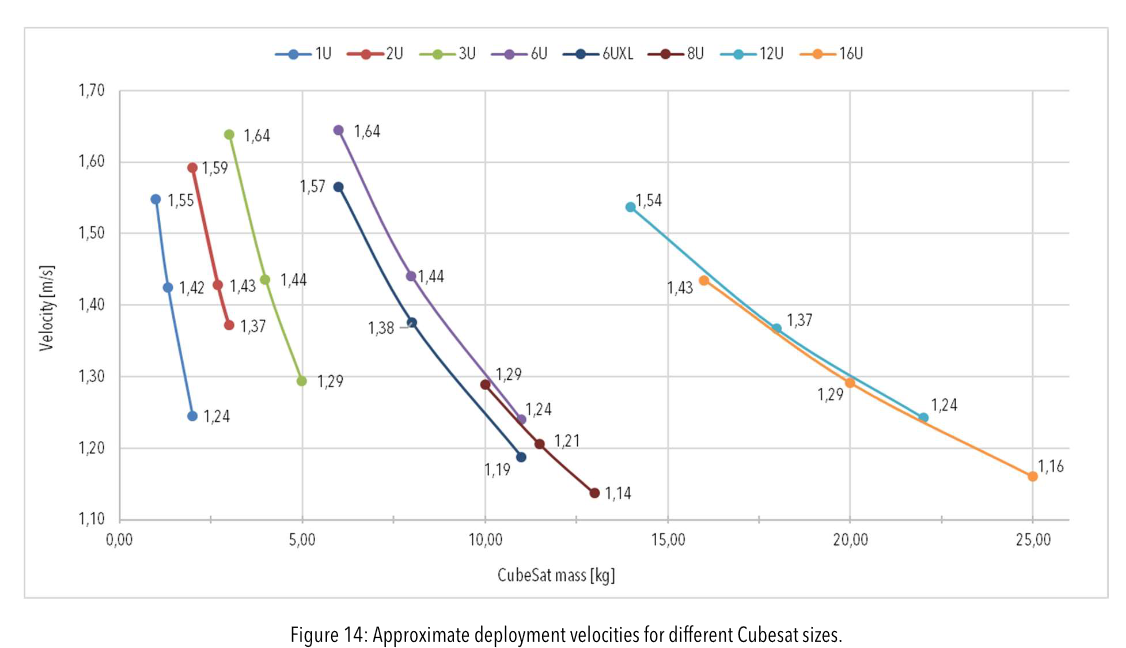 From the CarboNix User Guide page 19:

I've done this before, on the latest Falcon Heavy launch. Although the satellites we were working with were a good bit larger than most cubesats.

Essentially, the launch provider gives you state vectors, and then someone in the chain needs the STK ODTK to turn the state vectors into TLEs. Unfortunately I think the license for that is around $60k. I would be very interested in an open source solution to do the same thing, as ground systems almost always take as input TLEs.

The launch provider provides the state vectors, based on the deployment force, angle, and the state vector of the rocket stage when the cubesat was deployed. The exact format may vary, it could be a TLE or a state vector or something like that, in any case it will be something both the provider and the customer will agree on well in advance.

Not the answer you're looking for? Browse other questions tagged launch cubesat two-line-elements payload-deployment state-propagation or ask your own question.

9
How (the heck) are military satellites with (apparently) classified TLEs still showing up on sat map websites?
8
Has NORAD ever experienced a catastrophic event and “lost track of” a bunch of objects?
4
How to generate TLE file?
3
What is/was legacy TLE ephemeris type 2? (TLE, line 1, column 63)
6
Are SpaceBEEs actually hard to track?
6
CubeSat Orbit Determination
7
What is “OBJECT BS”?
5
ISRO's PSLV-C37 with 104 satellites - after 56 hours only six TLEs, which factor is greatest challenge?
6
Do deployments of multiple cubesats obey proposed guidelines such as 20 seconds or more between deployments at 5 m/s or faster?
2
Where can I find the TLE of ExseedSat 1, India's first ever private LEO satellite?
See more linked questions

5
ISRO's PSLV-C37 with 104 satellites - after 56 hours only six TLEs, which factor is greatest challenge?
9
How does the SpaceBEEs' experimental passive radar reflector work?
3
How can the two MarCO cubesats remain reliably close to InSight during their six month trip to Mars?
1
Converting TLEs into the input data for SGP4
2
What can be done in future mass-cubesat deploys to make them “less irksome” to orbital space debris experts?