Psyche & others will use Maxar 1300 series platform; are these the first instances of a commercial communications satellite bus sent to deep space?

The SSL 1300 is the world’s most popular spacecraft platform, designed to accommodate evolutionary technology advances. It was one of the first spacecraft platforms to provide solar electric propulsion (SEP) and has been used to demonstrate next-generation technologies including Q/V-band, photonics and a payload orbital delivery system (PODS) that brings small free-flying spacecraft to GEO.

In addition to Psyche, Maxar is also leveraging both its 1300-class platform and SEP technology for the NASA Gateway Power and Propulsion Element under the Artemis Program. The 1300-class platform has also been selected for NASA Goddard Spaceflight Center’s OSAM-1 mission and will host NASA’s Tropospheric Emissions: Monitoring of Pollution (TEMPO) instrument.

Question: Psyche & others will use Maxar 1300 series platform; are these the first instances of a commercial communications satellite bus sent to deep space?

This is quite hard to be definitive about.

One only has to look at images of Dawn (2007) and Mars Express (2003) to see the same choice of symmetrical solar arrays usually associated with geostationary communications satellites. 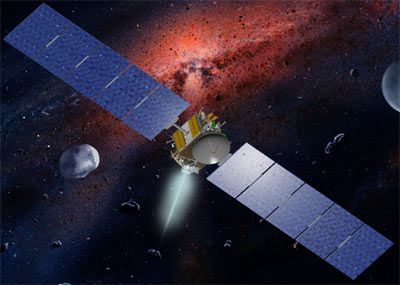 In each case there are numerous differences to regular communications satellites made for payload accommodation and also propulsion, AOCS etc. Maybe at this point one might think "so it isn't really a Star-2 platform or Eurostar 2000". However, and at this point it is as well to note that Maxar only say

and to recall that manufacturers could make any connections that suit their marketing.

So, maybe Psyche will the the first, maybe its another "related to another plaform".

1
How big of a telescope will Psyche's deep space optical communications demonstrator use out at 5 AU?

1
Will future deep space optical communications "ground stations" actually be in space, or on the ground?
7
Why are modern satellite ground station and deep space communications dishes with secondary mirrors almost always Cassegrain?
6
Was Tianwen-1 the first "triple-depl"? (orbiter-deploys-lander-deploys-rover-deploys-selfie cam) What are the highly hierarchical deep space missions?
5
How is the maximum data rate of the Psyche mission's Deep Space Optical Communications (DSOC) system expected to scale with distance?