Origin, artist, and original purpose of this unusual NASA image from 1996 or earlier? (possibly related to Clementine)

The discovery of ice on the Moon has enormous implications for a permanent human return to the Moon. Water ice is made up of hydrogen and oxygen, two elements vital to human life and space operations. Lunar ice could be mined and disassociated into hydrogen and oxygen by electric power provided by solar panels deployed in nearby illuminated areas or a nuclear generator. This hydrogen and oxygen is a prime rocket fuel, giving us the ability to refuel rockets at a lunar "filling station" and making transport to and from the Moon more economical by at least a factor of ten. Additionally, the water from lunar polar ice and oxygen generated from the ice could support a permanent facility or outpost on the Moon. The discovery of this material, rare on the Moon but so vital to human life and operations in space, will make our expansion into the Solar System easier and reaffirms the immense value of our own Moon as the stepping stone into the universe.

I've magnified and sharpened the tiny image in the blogpost. Presumably it's from a much larger image, somehwere.

Question: What is the origin, artist, and original purpose of this unusual NASA image from 1996 or earlier? Is it related to Clementine directly? 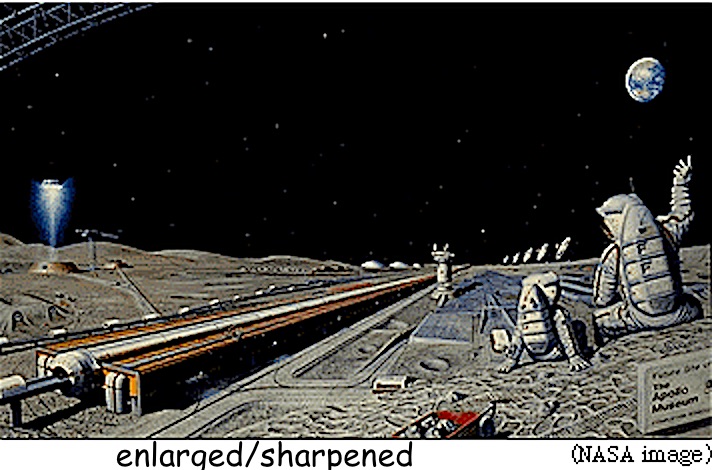 In this experiment the Clementine spacecraft transmitted an unmodulated S-band right-circularly polarized signal through the 1.1 meter high-gain antenna. The signal had a frequency of 2.273 GHz (13.19 cm wavelength) and net power of about 6 watts. The high gain antenna has a half-power half-beamwidth of 4.0 degrees. Reflections were received on Earth by the 70 meter antennae of the Deep Space Network (DSN) at Goldstone (United States), Madrid (Spain) and Canberra (Australia).

An imagined future on the Moon, showing some of the activities we might undertake there. The long, linear feature is a mass driver, a method of using magnetic levitation and propulsion to launch materials off the Moon’s surface without rockets. In this case, oxygen produced from lunar materials is shipped into space for use in orbital refueling stations. The array of dish antennas at right remind us that the surface of the Moon is an excellent place to observe the universe around us. Here, a radio telescope interferometer (an instrument used to integrate data from two or more telescopes) yields high-resolution maps of the radio sky. At bottom right, a young explorer shares the vista of the settlement on the New World with a parent. Artwork by Pat Rawlings.

Source: Once and Future Moon Poster

...its origin and purpose, still a total mystery

Not the answer you're looking for? Browse other questions tagged nasa history identify-this-object space-art clementine-spacecraft or ask your own question.

5
Who does these mesmerizing simulations of the phases of the Moon? And how?
5
Identify this rocket and launch site from Gilligan's Island episode?
2
Do you recognize these space artists who made this (possibly) first "paint-by-numbers" image of Mars?
17
Who is the artist of this image appearing in an article about a Russian space laser?
4
Who is the NASA Space artist of this circa 1978 satellite montage? Does a key listing each item exist?
8
Has NASA "gone south"? Why are astronauts needed to explore the Moon's south pole?
3
Help identifying this archival NACA/NASA image of a wind tunnel test object
5
How radioactive might the Moon's surface water be? Could it be unsafe to drink?
4
What is this font used in Apollo / early Shuttle NASA documents? (possibly OT)