Why have SpaceX skipped the SpaceX Starship SN12, SN13, and SN14?

Something has happened to the SpaceX Starship SN11.

(For full details and answers regarding SN11, check out the question What happened to the SpaceX Starship SN11?) 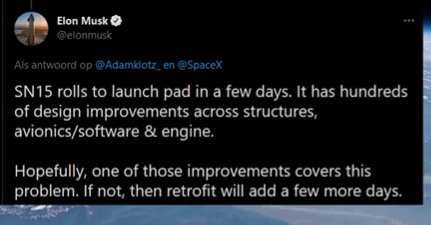 According to my opinion, SpaceX can just put the new technology in a rocket and call it SN12, why skip the numerical way? Is it just to show that the technology has advanced?

The second one is probably even more important than the first one: SpaceX wants to build a thousand Starships. And they want to do this as cheap as possible. They also want at some point to be able to do it on Mars, with a minimal amount of infrastructure needed.

That's actually one of the reasons why they can afford to develop the way they do: the Starships that blow up, they would have built and then scrapped them anyway. In some sense, the Starships are just by-products of developing the factory.

So, shortly after they started building Starship SN11, they also started building SN12, SN13, and SN14. Parts for all of those were spotted at the build site, some of them were even partially stacked, if I remember.

However, according to Elon Musk, Starship SN15 has hundreds of major improvements over SN8–SN14, so at some point, it does not make sense to delay the flight testing of SN15 just to finish building SN12–SN14, when they already know that those are outdated.

And that's why they abandoned and scrapped the partially built Starships SN12–SN14.

It is expected that a similar thing is going to happen with Starships SN18 and SN19: SN20 will have another set of major upgrades, and SpaceX currently has the ambitious goal of flying SN20 to orbit with Superheavy BN3 before July. There is no way they are flying SN15, SN16, SN17, SN18, and SN19 in April–June.

You can also compare that to Superheavy BN1, which was always just a manufacturing pathfinder: it was built purely to test how to build it and how to transport it around the factory, then it will be scrapped again. There were speculations that it would be transported to the launch site and maybe do some pressure testing, but those speculations were proven wrong, when SpaceX just cut a piece off one of the tank sections, including plumbing and everything, in order to fit BN1 into the high bay.

At one point in the early development, SpaceX was also prototyping a second factory in Florida. Two competing teams were building Starship prototypes; they were required to share information with each other, but were free to decide whether they acted upon that information or not. The goal was to pit different approaches as well as the different locations (in terms of infrastructure, for example) against each other.

However, this approach was quickly abandoned, as Boca Chica proved clearly superior and the Starship prototype in Florida was scrapped.

This is some unsourced conjecture, since much of this simply comes from public observations of operations in Texas by the countless fans.

They are running Boca Chica like a prototype Starship assembly line -- multiple test vehicles are under construction at all times. They roll sheet steel into rings, form bulkheads, stack the rings, etc in a multi week process.

At some stage, components were made for SNs 12, 13, & 14 -- But test flights of earlier models occurred while they were being built, and new design refinements were made that made existing work on 12-14 outdated.

Rather than expend time and expense completing prototypes that were already obsolete, they are scrapping the partial units and skipping ahead to the first unit built with the new enhancements in mind.

Possible that SN15 will be the first SN to be designed for a landing cradle. The new Superheavies are already designed to land in a cradle now being built at Boca Chica.

It's rocket science - there are limits to multistage engines that make integrated landing gear on heavy hulls impractical in Earth gravity (as we have seen). Cradles likely won't be required on the Moon or Mars.

Migrating to aerospike engines might make large SSTO spaceships with integrated landing gear practical on Earth. No such engine has ever made it to production without being cancelled for budgetary reasons.

The basic multistage engine design was developed during the Cold War at colossal expense, so it seems we are stuck with cradles for now.

91
How much bigger could Earth be, before rockets wouldn't work?
12
What happened to the SpaceX Starship SN11? Why did it crash?
1
Why SpaceX want to land the rocket on the ground?

10
Through what mechanisms would SpaceX test and examine the returned CRS-5 first stage?
6
What are the most difficult challenges SpaceX will face getting astronauts to Mars by about 2025?
4
Does the SpaceX Starship plan to have landing legs?
7
How did the SpaceX come up with such a disruptive design in the Falcon 9?
12
What happened to the SpaceX Starship SN11? Why did it crash?
7
Could SpaceX deliver the Interim Control Module to the ISS?