Is this really Rosetta's orbit around 67P?

From this link I fount the following representation of Rosetta's orbit relative to 67P: 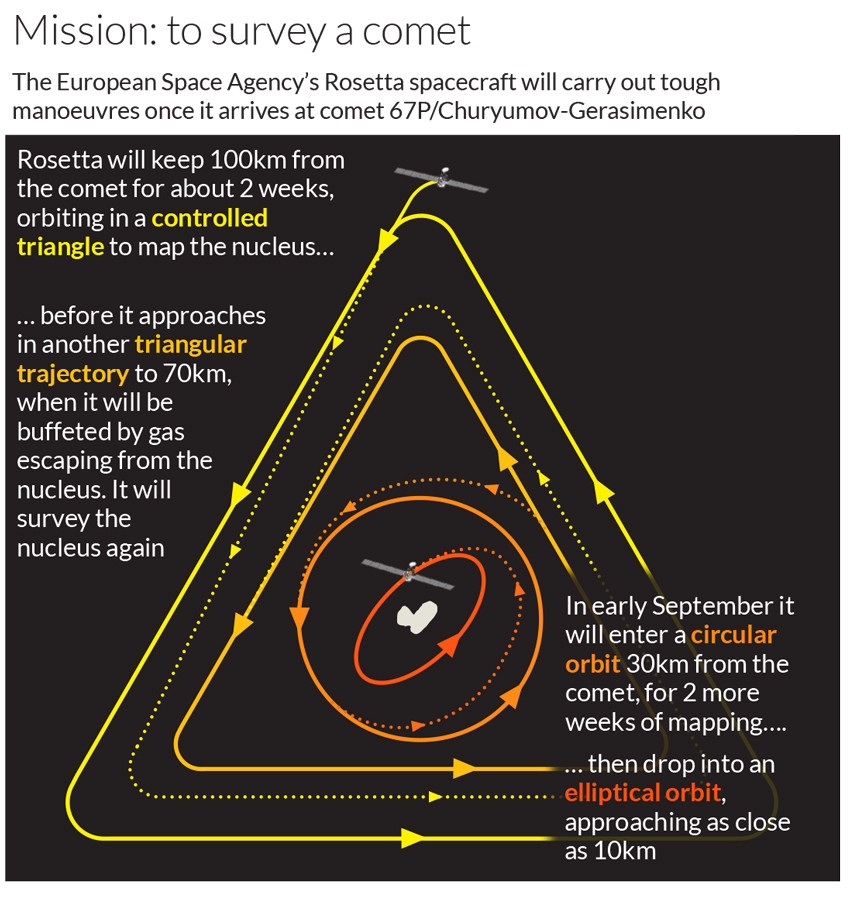 A video from ESA depicts a similar orbit.

This was one of the questions just now during the Rosetta press briefing. This video was shown during the presentation:

The triangular trajectory are hyperbolic orbits with respect to the comet and they'll (also, among other tasks also mentioned in the image you're attaching) serve to establish its mass. In essence scientists will be looking at how the comet's gravity changes these "straight" legs of the triangular Rosetta's quasi-orbit around comet 67P and estimate its density / mass more precisely.

The trajectory changing maneuvers aren't all that costly to the Rosetta spacecraft, and it was mentioned (during the briefing) that we're talking of delta-v of only a few meters per second during each of these maneuvers. So in a sense, since the comet's own gravity isn't all that great and the probe was already successfully injected into comet's own heliocentric orbit, they're not expensive to Rosetta's own propellants and would be more alike to satellite station-keeping maneuvers, like say the ones that satellites in halo or Lissajous orbits at Lagrange points would be performing, also on a fairly regular basis.

Adding to the existing answers: The triangular flight paths were needed to get enough images of the comet's surface, which are required for the low paths Rosetta flies today (and for dropping Philae close to the surface).

Rosetta's orbit propagator is an innovation insofar as it uses landmarks on the comet (among other things) to find the comet's and its own orientation, and to find a route to a given target landmark location. For this, the comet first had to be imaged in great detail, and that happened during the "triangle phase."

This has never been done before, and makes Rosetta a very exciting pilot project for ESA's future far-reaching space missions, which will all use this orbit propagator. It is already a breathtaking success if you consider the complexity the software has to manage.

Also, except for planned crash "landings," no spacecraft has ever flown by (or, as Rosetta does all the time now, has flown around and around) a comet in altitudes as low as 10 km. This requires a completely new auto-navigation system, and that one needs a map of the comet that cannot be acquired from earth (or from great distances in general).

(It is called "orbit propagator" despite the fact that Rosetta is not in an orbit because it is built upon other components that were core parts of "real" orbit propagators.)

http://issfd.org/ISSFD_2012/ISSFD23_IN2_2.pdf sheds some light on the propagator. Recommended reading imho.

It also has to do with the period. At 100km if Rosetta was just in a stable gravitational orbit due it would have a period of about 90 days, much less than the two weeks required. At 30km the gravitational period is about 2 weeks so this may explain why it is now in a circular orbit.

In addition to the other answers: the comet's gravity is so weak that when the probe is more than about 30 km away from the comet, gravity isn't enough to hold it in orbit.

So for higher "orbits", the spacecraft flies in formation with the comet, more or less sharing the comet's heliocentric orbit. The spacecraft flies at just above its escape velocity from 67P, so a tiny thruster burn is enough to change course to the next leg of the triangle. If something happens to Rosetta (e.g. a debris collision), the spacecraft will continue to slowly move away from the comet, giving the team time to reestablish contact.

Why do those high orbits have a triangle shape: it's the shape with the fewest "corners": you only need 3 course corrections per orbit.

And why did ESA use higher orbits: directly after arrival, and now that the comet is approaching perihelion, they want to make sure the spacecraft doesn't get blasted by debris coming off the comet.

Not the answer you're looking for? Browse other questions tagged orbit propulsion orbital-maneuver rosetta mission-design or ask your own question.

9
Is Rosetta really "in orbit around" 67P, or just conveniently co-located?
8
What was known about 67P/C-G's mass before the arrival of Rosetta?
8
Rosetta's lander, Philae will "anchor" itself on Comet 67P. What level of control can we have over this?

0
Why doesn't 67P get a name?
9
Is Rosetta really "in orbit around" 67P, or just conveniently co-located?
8
Rosetta's lander, Philae will "anchor" itself on Comet 67P. What level of control can we have over this?
10
Did we expect Comet 67P/Churyumov-Gerasimenko to be dusty?
8
What was known about 67P/C-G's mass before the arrival of Rosetta?
2
How close can Rosetta come to the 67P/Churyumov-Gerasimenko comet?
3
How will Philae's power failure affect Rosetta's mission?
12
How firmly does Rosetta rest on 67P/Churyumov-Gerasimenko?
3
Any relationship between Rosetta's OSIRIS camera, OSIRIS-REx, OSIRIS-3U, OSIRIS optical comms, OSIRIS spectrograph, & OSIRIS game?
0
Why was the Rossi X-ray Timing Explorer decommissioned in 2012? Why wasn't it deployed another ~100 km higher where drag would have been a lot less?