Was the space shuttle design negatively influenced by science fiction?

The space shuttle looked like space ships in Star Trek and a lot of other science fiction movies/TV. Did people's expectation of what a space vehicle should look like, based on futuristic movies/tv shows, negatively influence the design of the shuttle when a reusable rocket like Falcon Heavy or some other design would have been more cost efficient?

The design of the space shuttle concept went through many, many revisions before reaching the form that got constructed. Many options were considered, and they were selected or rejected for technical reasons, not for aesthetic ones. You can read about the process in The Space Shuttle Decision.

a reusable rocket like Falcon Heavy or some other design would have been more cost efficient?

The shuttle didn't even look very much like science fiction. I'd argue that Falcon Heavy looks much more like sci-fi than shuttle did.

Shuttle's relatively poor cost-efficiency (much exaggerated, actually) was due to the combination of very ambitious specifications and a lack of funding for development. Many of the shuttle concepts involved a fully reusable first-stage flyback booster, which could have reduced the per-flight costs, but would have required much more money for initial development. The main engine specifications were at the very edge of what was possible in that era, leading to an engine that was expensive to build and maintain. Congress demanded that shuttle be the only launch system for all US government applications, and in turn the Air Force set unreasonable requirements on its capabilities, making for a much more expensive launcher.

The dream of a space shuttle that would be reusable and could land like a plane had been around the space community since the 50's at least. You could argue that it was a mistake to follow that dream, and that NASA would have been better off continuing to use expendable rockets. So a case can be made that a wrong direction was taken. And it's true that science fiction writers like Arthur C. Clarke helped keep the public aware of that dream. But the thing is, it wasn't their idea. 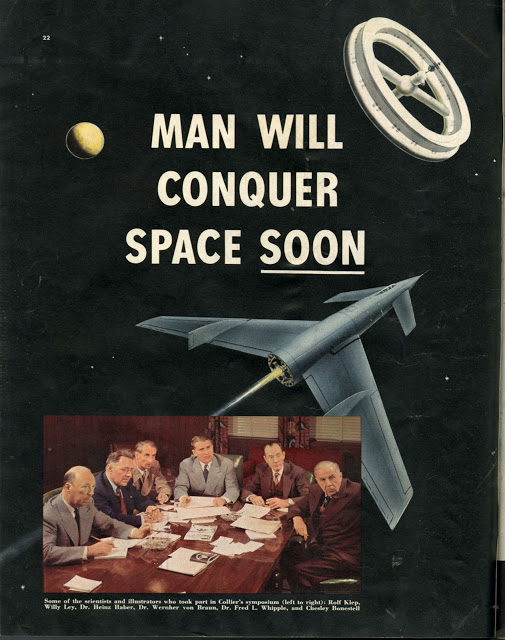 This painting is not from a science fiction magazine. It led off a series of articles in the magazine Collier's about the future of spaceflight, and the ideas in the article were from people like Wernher von Braun. So it may have been a mistake to follow the dream of a winged shuttle like we saw in 2001: A Space Odyssey, but the people who followed that dream were basically the ones who hatched it, and their intellectual descendants. They weren't following SF.

No. "Sci-fi" is often the forerunner of reality by inspiring innovation. Just look at the Star Trek communicators, Tricorders, and talking computers (working!).

The Space Shuttle design (50 years ago!) actually made a lot of sense, with the massive solid boosters making up for the weight penalty of carrying wings and landing gear into orbit.

The real failure of the Shuttle was its lack of ability to carry a third stage of any significant size, limiting the scope of its application options.

1970 was as far away from today as it was from 1920, and precious few people comprehended how much of an orbital flight in terms of height and speed occurred above the atmosphere. This is the realm of rockets.

A shuttle craft provides an interface between orbital an atmospheric flight only to recover that stage and anything returning from space. Most flights at that time were one way trips up, with the rocket being thrown away.

With today's technology, including advances in automation and GPS, we can recover boosters, giving the Shuttle concept new life for a much wider range of applications (other than returning astronauts or broken satellites).

But to do this we must get away from the science fiction inspired picture of a winged craft soaring through the heavens on the back of a rocket (Estes Orbital Transport for one).

Glider pilots know kinetic energy (from velocity) and altitude are your friends, and from orbit, after re-entry, you have plenty. The glider can be ugly, and not even good at gliding. To train Shuttle pilots, aircraft were flown with their engines in reverse.

All that is needed is an adapter for the third stage, so it can be pushed into orbit in much the same manner as a tug pushing a barge on the Mississippi river. Here in this article we can see Arthur Rudolph holding a model of the Saturn V. Fast forward 50 years and we have a fly-back booster on the right. The second stage is a lifting body, the third may not be changed much at all (or could be anything else that weighs 100 tons). Giant wings on the 2nd stage shuttle are not necessary when landing at 200+ knots.

the empty weight of the Saturn 2nd stage, at 88,000 lbs, is about one half that of the Concorde airliner.

The European Space Agency developed a "wingless" shuttle and flew it around 5 years ago. Lacking the cross-range gliding requirement of the Space Shuttle, it would be a candidate for application as a recoverable air to orbit shuttle, or RATOS, designed as a second stage to recoverable boosters now being commonly flown.

The requirement that the space shuttle have a pilot sitting up-front, looking out through a windscreen, and "controlling" the craft during takeoff and landing, negatively influenced the design. Alternative designs either fully automated, or with astronauts carried as passengers in the belly of the craft, were rejected for reasons that were predominantly related to gaining political and public support for the space shuttle program.

41
Did the Saturn V rocket have any purely aesthetic features that didn't serve an actual function?