Ablative heat shield and conservation of energy, how much does ablated matter in fact “carry away” versus re-radiate the absorbed heat?

Most heat shields ablate, that is they sacrifice material to carry heat away...

in a comment under this answer and started writing:

I think that shields ablate to produce a layer of complex organic molecules that are opaque to infrared radiation, decreasing the heat load from the hot plasma in the shock wave in front of the heat shield. There is way too little material to "carry away" one hundred billion Joules.

but then I stopped because of course if the ablated and gasified material is opaque to thermal IR then it must absorb the power in the IR and all that absorbed power has to go somewhere.

I assumed an Apollo-like 5,000 kg capsule and 11 km/s reentry and assigned 1/3 of the kinetic energy to absorbed energy in the absorbing ablated layer as just a guess.

But instead of leaving that comment I thought I'd ask for some real insight in the form of a question.

Question: How much heat does ablated matter in fact "carry away" as heated material? How much does it simply re-radiate back towards the plasma sheath? Can these be expressed as a fraction of the total energy dissipated stopping the capsule? Can they also be expressed in Joules/kg of ablated material?

I found this plot from the holy bible (NASA Aerothermodynamics Lecture) (also archived): 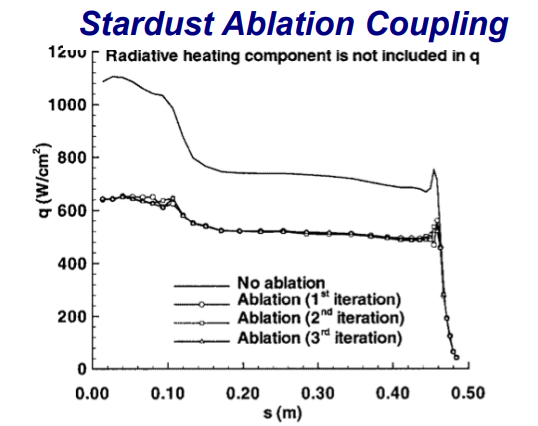 I don't profess to understand exactly what slide 69 is describing but you could draw the conclusion (from this graph) that a ~25% reduction of the convective heating is possible through ablation.

This paper Radiative Heating Uncertainty for Hyperbolic Earth Entry, Part 1:Flight Simulation Modeling and Uncertainty, Johnston et al. also contains plots of a similar nature to the one above, though with less of a dramatic effect.

There is thus work done on the air in the boundary layer, causing heating and increased temperatures. For very high free stream velocities, the temperatures reached are high enough to dissociate the air molecules, producing plasma.

A very hot boundary layer conducts heat to the surface, increasing it's temperature enough to cause pyrolysis within a layer of the solid; i.e., a conversion of solid to gas. The latent heat of this conversion is the energy carried away from the surface; the resulting gas being incorporated into the boundary layer and carried away from the vehicle. This is a simple explanation of the ablation process.

I believe the questioner asks how the latent energy taken from the surface compares with the radiation of energy that will occur between the plasma in the boundary layer back to the surface. This "re-radiation" occurs because the new surface exposed when material is ablated will be at a lower temperature than the plasma. There is also re-radiation from the boundary layer to regions away from the craft. There is considerable complexity to a thorough understanding of the entire ablation process.

The simple answer is that we know this re-radiated energy back to the surface must be much less than the latent energy, otherwise ablation wouldn't work, and the surface would be destroyed. This also indicates that the re-radiation away from the craft must also be small, although greater than that going back to the surface, since the sink temperature of ambient is much less than the surface temperature. In addition, the shape factor for radiation away from the craft is probably greater.

With all that and in specific response to the questions:

How much heat does ablated matter in fact "carry away" as heated material?

The question, "How much," isn't defined, since it could indicate either a numerical answer or an answer describing relative magnitudes. Relatively, the ablated matter carries away the vast majority of the dissipated kinetic energy of the moving nose cone. If not, ablation would not work.

How much does it simply re-radiate back towards the plasma sheath?

Can these be expressed as a fraction of the total energy dissipated stopping the capsule?

Yes, of course. The fraction due to ablation will be close to unity, since ablation is the major mechanism by which the nose cone slows down. A smaller fraction will be due to the energy radiated away from the nose cone, by all mechanisms, including radiation from the plasma envelope and radiation directly from the surface to which the plasma is more or less transparent. The particular numerical value will depend on the particular application, for instance, the nature of the ablated material, the geometry of the nose cone, the velocity in air, the altitude and density of the air, and other variables that render no one answer in a numerical sense.

Can they also be expressed in Joules/kg of ablated material?

Yes, of course. The kinetic energy of the moving nose cone can be expressed in Joules, and the mass of ablated material can be expressed in kg. The drop in velocity of the nose cone reflects the amount of kinetic energy dissipated, and the latter can also be expressed as Joules. This latter magnitude divided by the mass of ablated material in the process gives you the ratio you want. This ratio however does depend on the many variables I stated above, with a variation depending on the role of radiative energy from the craft.

Not the answer you're looking for? Browse other questions tagged thermal heat-shield thermal-control heat ablator or ask your own question.

3
Would it be possible to avoid the heat-from-friction problem when re-entering the atmosphere by performing (vertical) “U-turns”?

9
How does the surface area of a heat shield impact the ideal angle of attack for reentry?
8
How does the Parker Solar Probe's heat shield protect it from dust near the sun?
3
Mercury reentry heat shields; material composition, manufacturing process and explanation of all those concentric ridges?