What causes GAIA rotational axis to precess the way it does? How exactly is this accomplished?

The GAIA spacecraft rotates at 1 degree per minute about its axis, scanning two telescopes looking 106.5 degrees apart but imaging on the same focal plane around a circle every 6 hours.

The rotation axis is kept at 45 degrees with respect to the direction of the Sun, but it is said that it precesses around an axis pointed at the Sun once every 63 days (4 degrees per day).

Note that GAIA is in a Lissajous orbit around Sun-Earth L2 with a period of 180 days, and of course L2 orbits the Sun every 365 days, so the direction that points towards the sun also moves; this so-called "precession" is not about an inertial axis! I'm totally confused by all of this.

Figures 6 and 7 in The Gaia mission (also here) as well as all the math there give some insight into the motion, but not necessarily the reason. There is some discussion of the spacecraft in this paper as well.

GAIA's astrometric performance is at the micro-arcsecond level

I don't think this is done by nudging with thrusters, there must be some elegant and super-smooth (and probably passive) way that this was implemented.

Question: What causes GAIA rotational axis to precess the way it does? How exactly is this accomplished in such a super-smooth way? 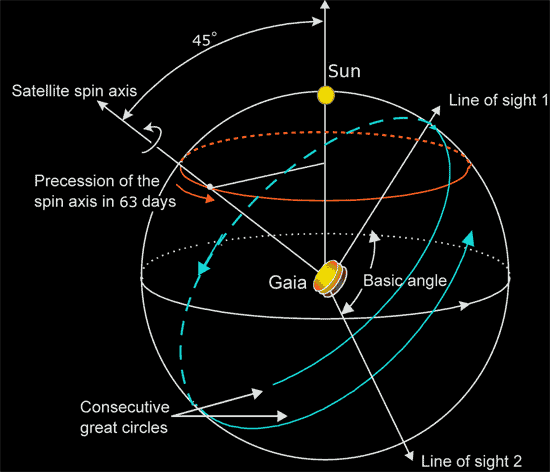 From the perspective of an inertial frame of reference, the change in an object's intrinsic angular momentum $\vec L$ is related to the external torque $\vec \tau$ on that object via the rotational equivalent of Newton's second law, $\dot{\vec L} = \vec \tau$. For a rigid body, $\vec L=\mathbf I\,\vec\omega$. Differentiating this with respect to time results in $\dot{\vec L} = \dot{\mathbf I}\,\vec\omega + \mathbf I\,\dot{\vec\omega}$. This is a bit ugly.

This remains confusing because, as Herbert Goldstein wrote in the very widely used text on classical mechanics, "hence the jabberwockian sounding statement: the polhode rolls without slipping on the herpolhode lying in the invariable plane." The behavior for an arbitrary body can be rather complex. Fortunately, the behavior becomes much simpler for a torque-free object with axial symmetry that rotates about an axis that is close to but not the same as the axis of symmetry. The axis of rotation precesses, with $\mathbf I^{-1}((\mathbf I\,\vec \omega)\times \vec \omega)$ describing the precession rate.

The designers of Gaia and its predecessor (Hipparcos) chose the final option.

A spinning object can naturally precess, as in the case of GAIA satellite, only if its principal moments of inertia normal to the spin axis are equal to each other, and different from the principal moment of inertia parallel with the spin axis. That is, if the satellite spins around its Z axis (angular velocity vector in satellite's body reference frame $\vec{\omega} = [0, 0, \omega_z]^T$ is parallel with principal moment of inertia $I_z$), then it must be that $I_x = I_y \neq I_z$. This is necessary to keep the angular velocity vector locked in the body reference frame. The equation from David Hammen's answer can be broken down into three separate equation components for each of the three axes:

If it would be the case that $I_x = I_y = I_z$, then the inertial torque terms would disappear and the equations would become:

In this case the angular velocity vector components can be freely and independently changed by applying torques. A torque to one component will not change the angular velocity of another component. Also, notice that any torque application will necessarily change the angular velocity vector in the body reference frame. It is still possible to force the spinning object of this case to precess, which we will return to after we examine the $I_x = I_y \neq I_z$ case, where the precession happens naturally. There the inertial torque disappears only for the Z component, while for components X and Y we can introduce a constant $k = \omega_z(I_z - I_y) = -\omega_z(I_x-I_z)$. Notice the minus sign, as the $I_z$ position is changed. This gives following equations:

Now, if there is no spin around the Z axis ($\omega_z = 0$), then it is the same as in the previous case, but as soon as there is some spin ($\omega_z \neq 0$), the X and Y components become coupled. The greater the spin, the stronger the coupling. Because the signs before the inertial torque terms are different and the constant is same, the components will act against each other. Start with $\omega_x = 0$, $\omega_y = 0$ and $\omega_z$ is some large positive value, and introduce a small torque in X component. This will produce positive $\omega_x$, which then produces positive $\omega_y$; a positive $\omega_y$ will act to decrease $\omega_x$. With sufficiently high spin rate and large k, the X component torque is overpowered and $\omega_x$ quickly goes to negative. Now, a negative $\omega_x$ will act to decrease $\omega_y$. With a large k, $\omega_y$ is soon negative, and a negative $\omega_y$ acts to increase $\omega_x$. This is a little bit sketchy explanation, the reality involves some infinitesimals and makes the $\omega_x = 0$ and $\omega_y = 0$ a stable state, but hopefully should provide a bit of intuition. This stability is only regarding the body reference frame, one can still change the angular velocity vector freely in all three components in inertial reference frame. In fact, this is what drives precession, the torque applied and work it generates does not disappear in the thin air, it changes the orientation of the velocity vector while the axis of rotation of the body remains the same.

Back to the $I_x = I_y = I_z$ case, to make it precess, the control torque would have to imitate inertial torque terms with strength that overpowers the regular torque terms.

And for the completeness sake, the case $I_x \neq I_y \neq I_z$ does not have a natural precession as the inertial torque terms will be different for all three components and the Z component would not be decoupled. Still a control law could be made to force it precess.

Another important thing to consider is how the precession can be controlled. Or how is the angular velocity vector changed in the inertial reference frame? I do not believe that any amount of equations will be better than having a visual aid for understanding this. Luckily, there is a good number of videos online trying to explain. Here is one that have I randomly chose and found it to be pretty good

I was quite intrigued when I first saw that picture in your question. The Sun and the photon pressure from it would be perfect to naturally generate precession without the need of active attitude control (in ideal case that is, in reality it would of course still need to apply at least small attitude corrections especially with the 1 arcsec level of precision). But the excitement quickly went down realizing that the torque from the solar pressure would be very small.

A formula connecting angular velocity, precession rate and a torque when $\omega_z >> \omega_p$ (a derivation can be found here https://courses.lumenlearning.com/suny-osuniversityphysics/chapter/11-3-precession-of-a-gyroscope/) is:

where $\theta$ for GAIA satellite is $45 deg$. Thus, the required torque is $\tau = 1.999 m N m$. One second of this torque applied to the satellite would change its angular momentum no more than 0.2%. I think this means that the natural precession can be achieved with a torque normal to both the angular velocity vector and the Sun direction vector.

From https://www.researchgate.net/publication/257561746_Dynamical_attitude_model_for_Gaia we can learn that the solar pressure torque (which is also the greatest external torque source, so we do not have to care of other torque sources for this analysis) is $\tau_{sp} = 134 u N m$, almost 15 times weaker than necessary. This means that the GAIA satellite must constantly and actively provide control torque.

Also, the article talks about canceling the solar pressure torque, so it is probably not even the case that the satellite is designed to leverage the external source, but has to rely on its micropropulsion system to first cancel the external torque and then to control the attitude. It is also very interesting that the effects from micrometeroid impacts are quite significant, relative to mission's attitude error tolerances, for which the attitude system needs to constantly do corrections. I had opportunity, several days ago, to attend a presentation where in-flight data of micrometeroids impacts were shown. In the plots it was also noticeable a fine constant wobbling of attitude, before impacts, that comes from the micropropulsion corrections. If I understood that correctly, it is another confirmation that the attitude system is constantly active.

Not the answer you're looking for? Browse other questions tagged space-telescope attitude-determination-and-control gaia or ask your own question.

8
To what extent could JWST continue to be useful after the propellant runs out?

37
Why should the James Webb Space telescope stay in the unstable L2?
9
What is the flight plan to get Gaia in orbit around the Sun–Earth $L_2$ Lagrangian point?
13
Why does the Gaia space telescope have two main mirrors
11
How are the Voyagers' thrusters configured in a novel way to minimize accelerations along Earth-spacecraft axis?
10
Could the ISS stop rotating wrt the stars for a few days, then start again?
5
How is GAIA's phased array configured, mechanically and electrically?
3
How many times would two astronauts have to run around Skylab to turn it by 10 arc minutes?
6
What will happen to JWST after its 10 year mission?