How did LADEE and LDRC measure it's distance from Lunar orbit to Earth to 1 centimeter accuracy using optical communications?

The video Donald Cornwell plenary talk: NASA's Optical Communications Program: 2015 and Beyond was presented at SPIE Photonics West 2015. It's a great talk and worth the time.

LADEE had [the Laser Communications Relay Demonstration](https://en.wikipedia.org/wiki/Laser_Communications_Relay_Demonstration or LDRC which provided 20 Mbits/sec upload and 622 MBits/sec from LADEEE back to Earth. The beam spots from its ~10 cm telescope was only 6 km diameter on Earth!

System allows for precise location of spacecraft for navigation (< 1 cm)

and the speaker mentions this as well.

Question: How exactly did the optical link between Earth and LDRC measure the distance accurately enough to get 1 cm position information? While there are ways to frequency lock lasers to electronic timebases it's pretty exotic stuff. I don't think that the return laser beam was coherent with the incoming laser the same way that a coherent transponder uses a PLL to lock to the incoming RF signal.

My guess is that it has something to do with the modulation signals of the laser beams, but it would be good to know the details. Were something like gold codes used for correlation? Did they get both delay and doppler information?

The modulation of the laser is not likely to be as high of a frequency as the carrier used for ranging using coherent transponder; the data rates are mentioned above. 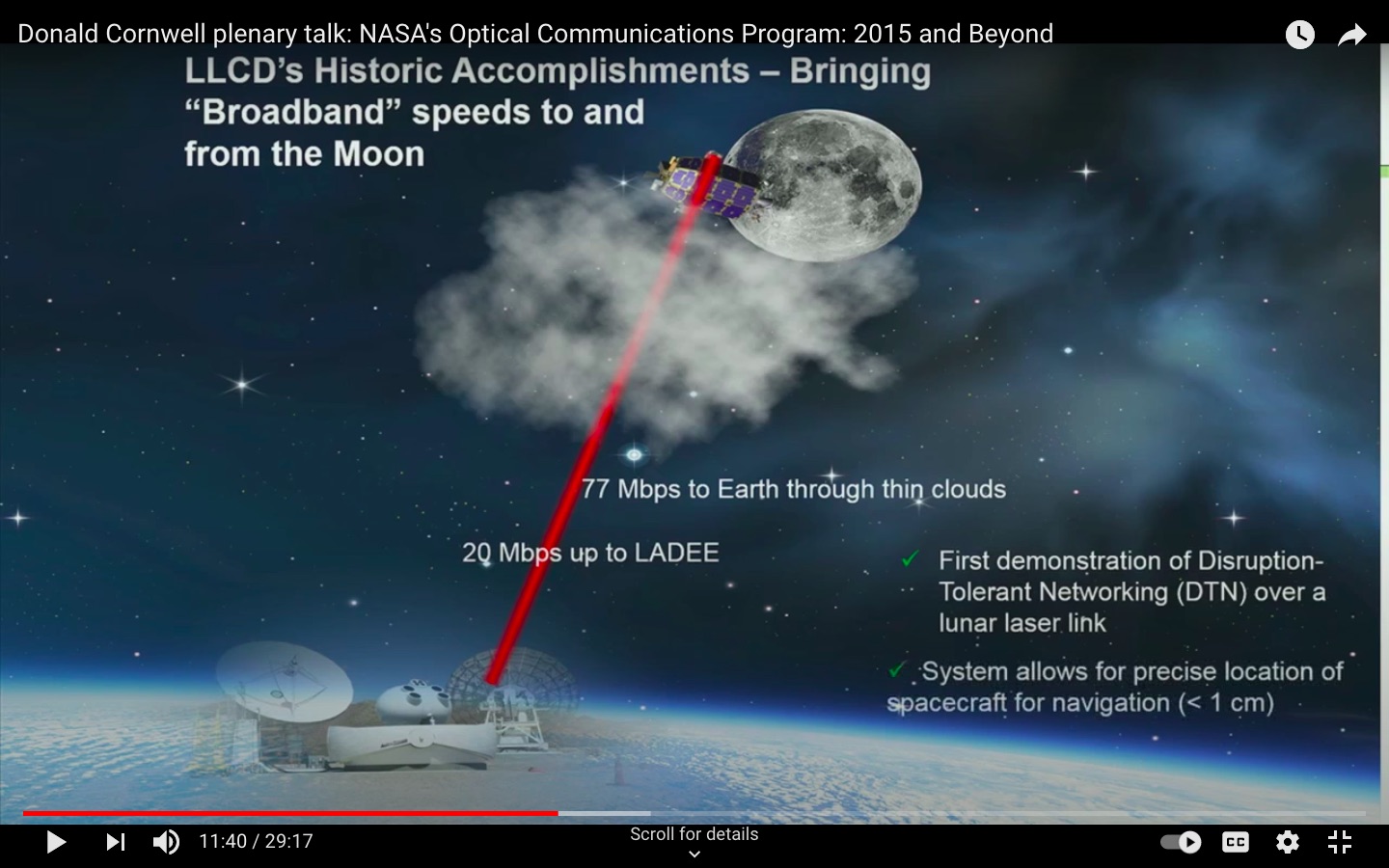 In case of optical communication we don't deal with electromagnetic waves that are collected in an antenna at a ridiculously low power level, are amplified by many orders of magnitude and then need to be correlated with a known signal shape to extract meaningful information from the abundant noise.

In optical links (here: infrared light at 1500 nm) each and every photon received by the telescope carries enough energy to be detected individually and its very own arrival time can be determined with a precision of a few dozen picoseconds.

But let's take a step back, along the lines of Boroson et al. in "The Lunar Laser Communications Demonstration (LLCD)": The laser on LADEE transmits data at a rate of up to 622 MBit/s using a laser modulation at 3 GHz that generates 300 ps long light pulses. At the receiver side, light is detected using Superconducting Nanowire Single Photon Detectors (SNSPD) that deliver time information with 30 ps precision. These are made of a superconducting material that, whenever it is hit by a photon and absorbs it, loses superconductivity for a short moment, which can be detected by sensitive electronics that measures the voltage drop along the wire.

With this timing capability, the whole measuring process boils down to sending a short bitstream and measure the time until it returns back from the satellite. A single photon (that belongs to a known bit in the stream) already gives you a precision of 150ps (because it's unknown when exactly it was sent during a 300ps long pulse) or a distance precision of 10cm. Continuing the measurement for the next couple thousand photons (i.e. a few microseconds at most) reduces the uncertainty by averaging down to the claimed 1cm precision.

One thing missing in above is the fact that the time the satellite needed between receiving a bit and sending the answer out needs to be know at high precision as well. There are two possibilities for that: Either it measures this time using the same principle as described for the ground station - or an extended bit stream is used by the satellite to recover the clock signal and use this for its transmitter, therefore sending with a fixed and predetermined latency.

A Doppler measurement to get the radial speed component could be done based on the 3 GHz modulation as well, but due to the very short time of a ranging measurement is likely not needed - it might be replaced by several subsequent range measurements as well.

Not the answer you're looking for? Browse other questions tagged laser delay-doppler optical-communication ranging ladee or ask your own question.

5
Is there a way (working or in development) to track satellites in lunar orbit like we track objects in Earth Orbit?
9
Is it possible to extend high speed data transmission with lasers to the distance Earth to Mars?
4
Quantitatively, why will optical communication be better than X-band for deep-space communications?
3
Are relay stations possible between planets?
2
Did Perseverance get an experimental optical communications terminal?
1
Long delay-doppler measurements on deep space craft; couldn't optical measurements be made intermittently, mixed with contacts to other spacecraft?