Is Starship planned to fly directly to the ISS without first stage? Is it even possible?

I'm having difficulty understanding how/if Starship and/or Super Heavy could be used to deliver crew to LEO.

Is it expected to deliver astronauts to the ISS Crew-Dragon-style, but without the 2nd stage; that is, "FSTO"? (as opposed to SSTO)

Is Starship planned to fly directly to the ISS without first stage?
Is it expected to deliver astronauts to the ISS Crew-Dragon-style, but without the 2nd stage; that is, "FSTO"?

No. Starship will be launched on top of Super Heavy. There is no plans for a SSTO Starship on Earth to carry crew/cargo to orbit. 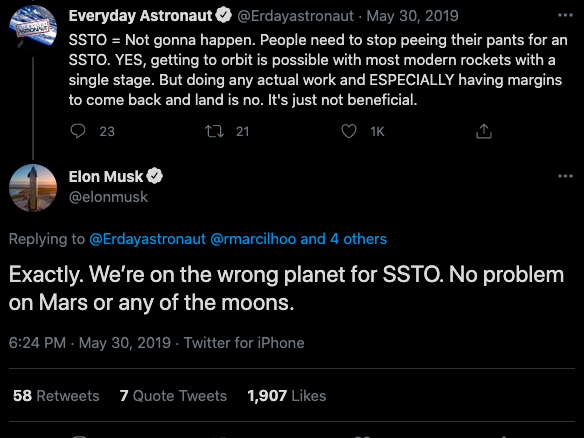 Is it even possible? 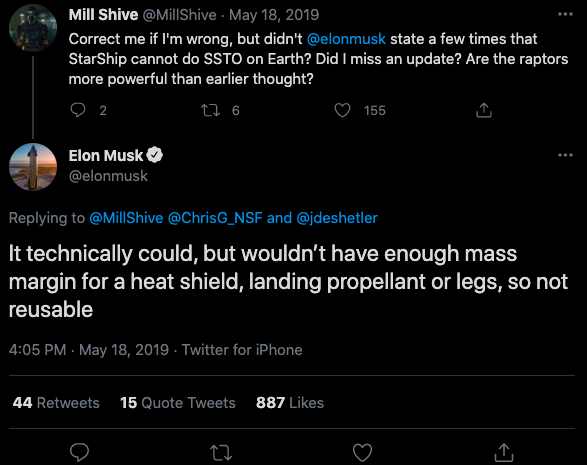 Tweet. You would have to launch Starship without recovery equipment to do SSTO; meaning no recovery, which for crew transportation to LEO; is problematic to say the the least.

Probably not. The mass margins just aren't there for a methalox FFSC rocket. With something like Skylon you could, but of course that's using an advanced air breathing hydrolox engine.

Is it expected to deliver astronauts to the ISS Crew-Dragon-style, but without the 2nd stage; that is, "FSTO"? (as opposed to SSTO)

Starship cannot get to orbit in any meaningful way without Super Heavy. Theoretically, it would be possible to get to LEO without any payload and by removing all recovery hardware, the body flaps, the landing legs, the heat shield, the header tanks, and the extra fuel for landing. However, doing so wouldn't make any sense.

You need Super Heavy to do anything meaningful … such as bringing crew to the ISS.

Super Heavy is the booster. It can't get to orbit. And if by some miracle a Super Heavy magically gets transported into orbit, then it can't get back: it has no heat shield, no way to shed its velocity, no way to survive reentry from orbital velocity.

It doesn't really make sense to compare Starship to capsule-based systems such as Dragon, Soyuz, Starliner, Orion, or Apollo. You should compare it to the Space Shuttle.

Starship docked to the ISS will look pretty ridiculous, though:

However, note that despite the renders on the SpaceX website, there are currently no plans to actually use Starship to launch to the ISS. Also, it is going to be a long time until Starship gets crew-rated as well as certified for ISS proximity operations.

Not the answer you're looking for? Browse other questions tagged spacex iss low-earth-orbit spacex-starship spacex-super-heavy or ask your own question.

11
How far downrange would a reusable Falcon 9 first stage land (without fly-back)?
18
Would it be possible to get back to Earth from the ISS without any ground support?
3
Could a Mars return mission go directly back to the ISS?
16
Was SpaceX's launch of Formosat-5 more vertical than normal for any particular reason?
8
Would it be possible to split the ISS?
1
Is a Mars return mission by Starship possible without local propellant production, given the current specifications?
3
What is the expected date for the first Starship 20km test flight?
4
Does the SpaceX Falcon 9 first stage fleet, fly in order?
16
What can the ISS do that a SpaceX Starship could not?