How did the pilot lockout on Vostok 1 work?

The entire mission would be controlled by either automatic systems or by ground control. This was because medical staff and spacecraft engineers were unsure how a human might react to weightlessness, and therefore it was decided to lock the pilot's manual controls. In an unusual move, a code to unlock the controls was placed in an onboard envelope, for Gagarin's use in case of emergency. Prior to the flight, Kamanin and others told Gagarin the code (1-2-5) anyway.

How did this lockout work?

Related: What was the globe instrument in Vostok 1?

This is part of 6 questions honoring the 60th anniversary of Vostok 1, the first human spaceflight.

For Vostok, the controls were really not all that impressive by today's standards. The picture below shows the control and information panels on Vostok spacecraft. 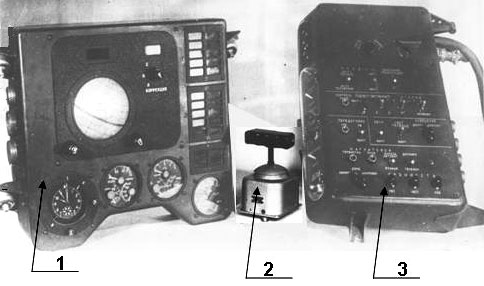 Here, 1 is the information display (orientation, status lights, ...), 2 is a 2-axis joystick and 3 is the control panel. Quite ascetic, as you can see.

The lockout was electrical. You can clearly see it here in the top left corner: 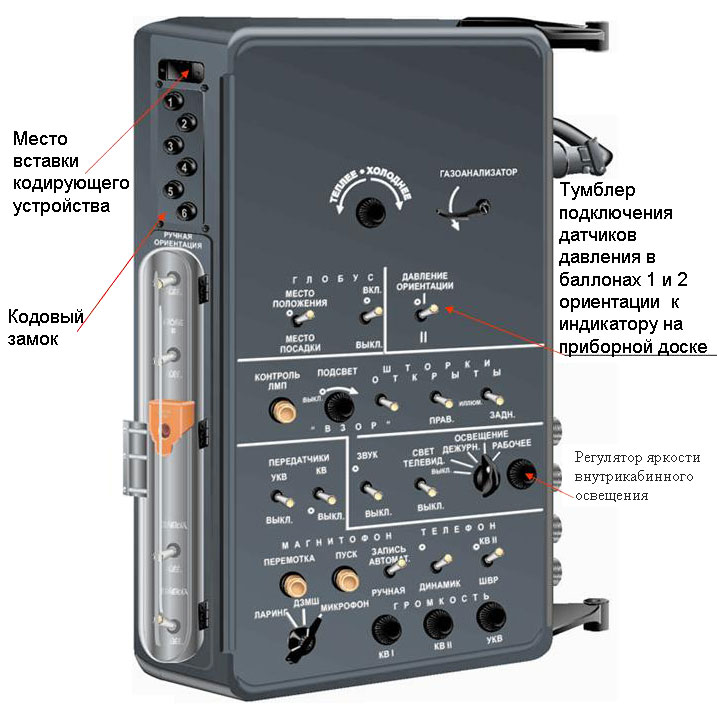 And this picture shows the code lock part with its electrical connector:

Here, 1 is the encoder and 2 is the input area. The encoders were a separate, removable part and configured the code lock for a specific combination. They looked like this:

Now that is out of the way, what did the lockout actually do? When enabled, it electrically blocked any inputs from the control panel and all the work was done by the onboard computer. You can also see that some critical switches are even put being a clear cover (although that was not locked as far as I can see). The switches under that cover performed functions as:

After Vostok-2, the lockout was no longer used and the code lock was removed from the control panel. Most likely this happened after it was confirmed that the cosmonauts would not become delirious in space.

You can see a mock-up of the side panel here:

Not the answer you're looking for? Browse other questions tagged flight-control vostok-program or ask your own question.

17
What was the globe instrument in Vostok 1?

4
Could Vostok 1 deorbit on its cold gas thrusters?
18
How did the Vostok ejection seat safely eject an astronaut from a sealed space capsule?
5
Did the heat shield of the Vostok 1 capsule ablate during reentry?
7
How was the Vostok capsule stabilized for spin during descent, after the equipment/maneuvering module had detached?
34
How did the USSR track Gagarin's Vostok-1 orbital flight? Was tracking capability an issue in the choice of orbit?
12
Was the SK-1 spacesuit tested in flight prior to Gagarin's historic mission?
50
What led Yuri Gagarin to believe his hatch was not properly sealed?
7
Did Yuri Gagarin really telephone officials in Moscow to come pick him up?