Why does ISS uses liquid ammonia in the Active Thermal Control System?

I saw this today and it made me very curious.

Ammonia has a boiling point of -30 C. The ammonia is liquid in these loops, so if ever exposed to sunlight I'd imagine intense expansion as it goes into gas phase. I noted that Ammonia volumetric expansion coef > water expansion coef.

Is the ammonia loop highly pressurized? Would that make the make the risk of leaks higher? (I see there have been several spacewalks due to ammonia coolant loop leaks)

Next point: The specific heat capacity of Ammonia is: 80.8 kJ/kg K Which is much higher than water 4.2 kJ/ kg K

***I made a mistake the specific heat capacity of ammonia is pretty close to water, at 4.7 kJ/ kg K

So I guess this means that ammonia can exchange substantially more heat energy without changing its temperature. Yet, I dont clearly see the advantage of that since its normal boiling point is at lower temperature than water.

So whats the advantages/ reasoning for using Ammonia for the coolant loop? 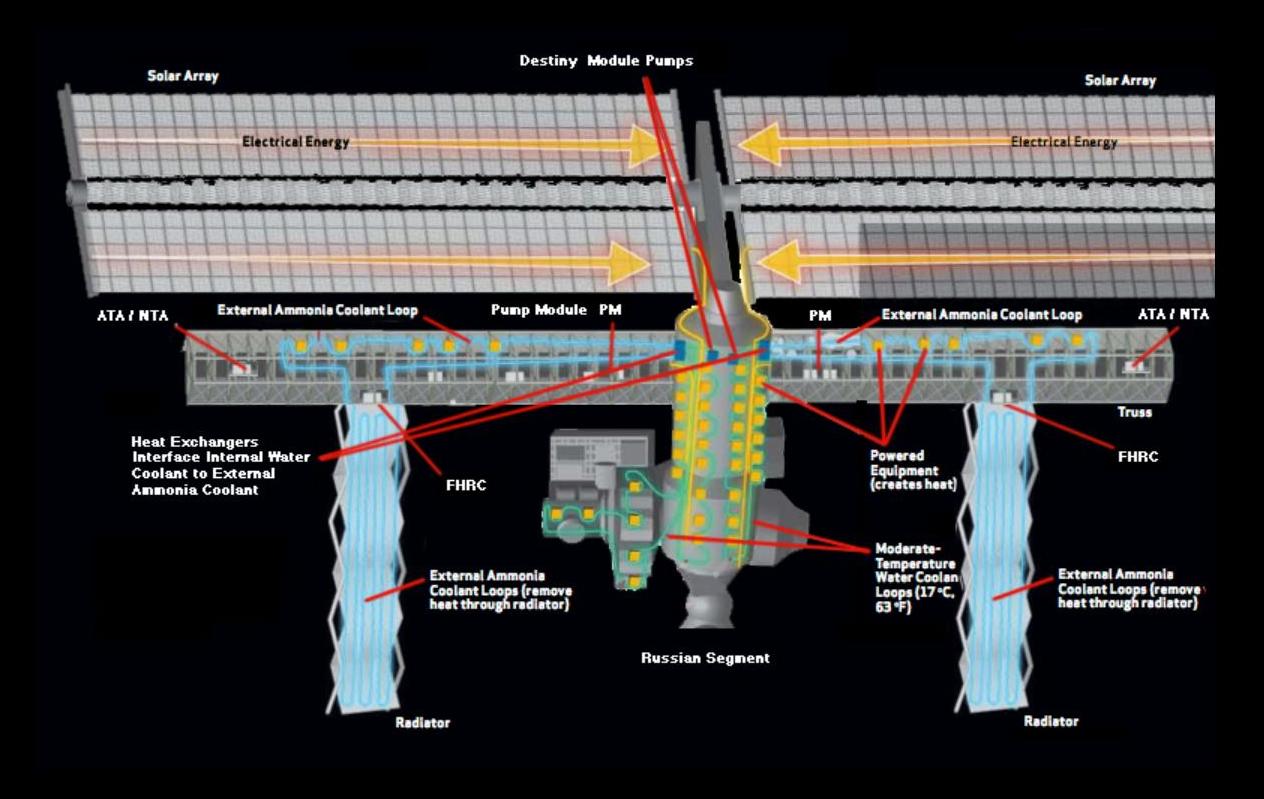 Ammonia is used because it has excellent heat transfer properties (as you mention) and a low freezing point. Because of its toxicity, the ISS has internal coolant loops which use water as a heat transfer fluid. Only the heat exchangers where the two systems interface allow for the possibility of ammonia leaks into the cabin.

After detailed engineering analysis, NASA chose ammonia as the coolant for the ATCSs on the exterior of the space station for several reasons: ammonia has a lower density than many other commercially available coolants and can therefore be launched in great quantity at dramatically reduced launch costs; it has a low viscosity so it requires little power for pumps to circulate the ammonia through cooling loops; and ammonia remains liquid down to -78°C (-108°F), which is important in the extreme cold of the ISS external environment. On the downside, ammonia is toxic to humans; therefore, the possibility of this dangerous chemical leaking into the pressurized cabin is one of the three major emergency responses discussed in Chapter 19.

Ammonia is incompressible, but the ISS ammonia loops operate at a reasonably high pressure (~ 7 MPa, 1000 psi)

Reference: The International Space Station - Operating an Outpost in the New Frontier (Chapter 11 recommended for further reading on the cooling systems).

Not the answer you're looking for? Browse other questions tagged iss thermal-control heat cooling heat-flow or ask your own question.

6
Did or do space station engineers need to worry about angular momentum stored in circulating fluids?

12
With one out of two Thermal Control Systems on ISS malfunctioning, how long can Loop B keep up with increased load?
8
How does Bigelow plan to handle heat rejection on the BA-330?
26
Why did Salyut 7 freeze over, while ISS requires massive cooling system?
6
How does a thermal control system of a spacecraft basicaly work?
18
Why does the ISS need thermal blankets if the Sun is hot?
4
Why do the ISS' Thermal Rotary Radiators need to tilt?
7
How much could "sublimator operation" have possibly contributed to Apollo 11's "sizable downrange miss"?
2
How do Stirling radioisotope generators maintain a temperature differential in a vacuum?
8
Why does the Alpha Magnetic Spectrometer (AMS) on the ISS use carbon dioxide for coolant?