Could folks in space see giant projections of art on mountains like this one? Was this one seen or recorded?

Could folks in space, either space station astronauts in LEO or even future space tourists in suborbital arcs be able to see large projections like this on the sides of mountains?

Did ISS astronauts have an orbital opportunity to try to see and/or photograph it?

Was it seen by any Earth-observation satellites?

discuss how well art can be seen from space and show some examples, and

show some artificial light sources photographed from space, so I think it is plausible, but there's a limit to how much light a projector can put out and how bright the result will be when spread out over a mountain-sized screen with optical scattering properties far from ideal. 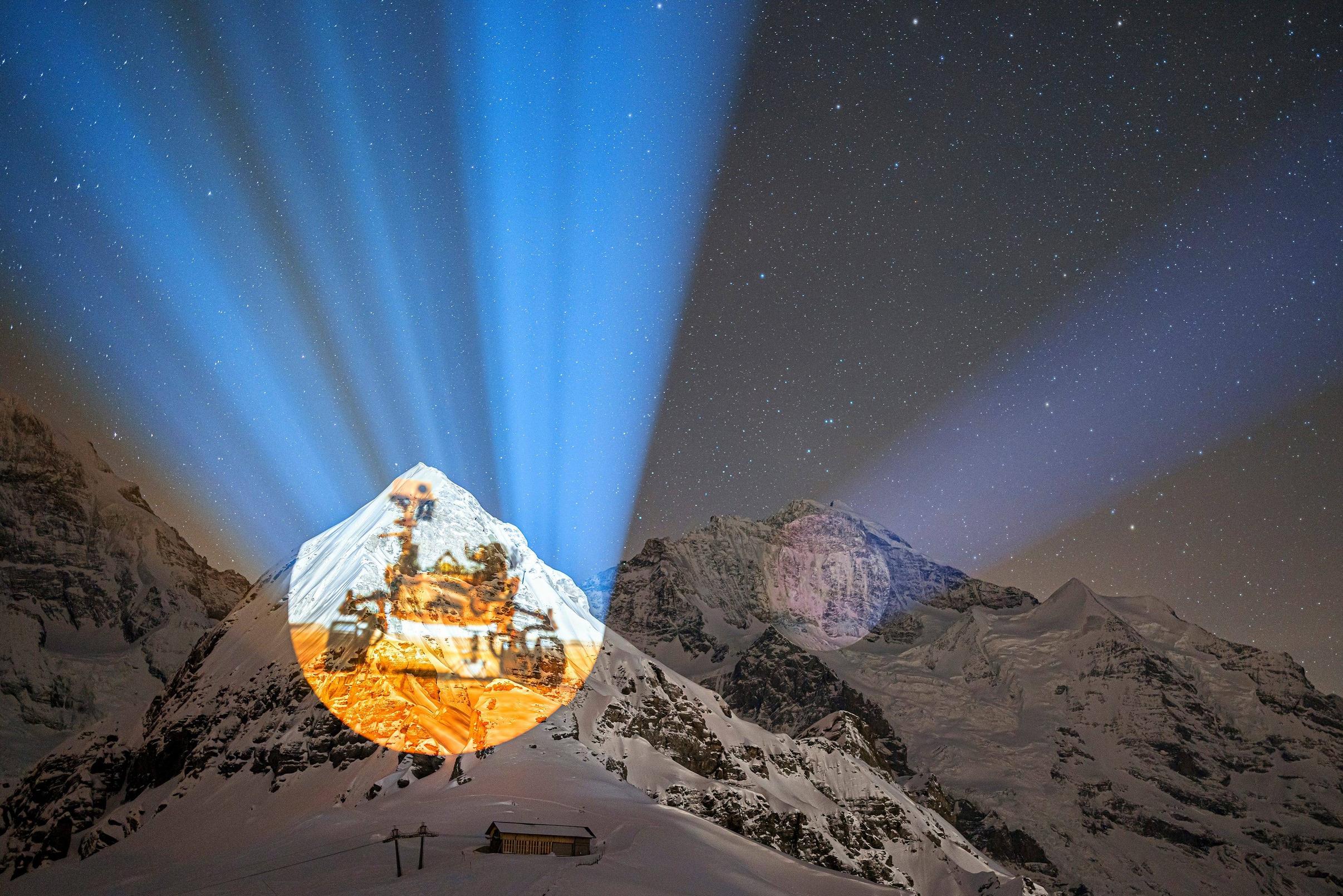 A giant projection of the NASA Mars 2020 mission Perseverance rover on the Tschuggen mountain (left) and Mars planet on the Jungfrau mountain (right), by Swiss light artist Gerry Hofstetter, is pictured from the alpine resort of Mannlichen, Switzerland, Feb. 15, 2021. Several projections were performed both from the ground and helicopter and were carried out over distances of up to 8km and dimensions up to 2.2km in height on the iconic Swiss mountains Eiger, Monch und Jungfrau. The artistic performance pays tribute to the "Mars 2020" Perseverance rover mars mission by the NASA planned for landing on Feb. 18, 2021. VALENTIN FLAURAUD, KEYSTONE VIA AP

Because mountains are very lumpy, the picture would be clear only if you viewed it from the ground in the general vicinity of the projector. If you see it from above in an aeroplane it would not be a circle and it would be very difficult to tell what it is supposed to be a picture of.

Because of the size, to a human eye from orbit that would be a very dim very small dot, smaller and dimmer than all the other tiny dim dots that are nearby towns and cities. I don't think an artist could get their hands on a projector as bright as a whole city. So you would have trouble finding it.

With a sufficiently large telescope a lot of things are visible from space. For sure the US National Reconnaissance Office would have a camera in orbit that could see this if they wanted to.

Not the answer you're looking for? Browse other questions tagged space-art tourism or ask your own question.

48
What caused this bright light from the ground at night seen from the ISS?
10
Could an ISS astronaut photograph something like this 1km “Van Gogh” if they knew it was there?
9
What is this huge, red, blinking light structure on Earth seen from the ISS in this video?

10
Could an ISS astronaut photograph something like this 1km “Van Gogh” if they knew it was there?