How will Juice substantially increase its inclination around Jupiter in January 2031?

The ESA video Juice’s Jovian odyssey linked below is quite interesting to watch. Around January of 2031 it substantially increases its inclination around Jupiter. Big inclination changes can be expensive in delta-v and doing anything in such a large gravity field has an "expense multiplier".

It doesn't look like Juice is doing these at a very distant apoapsis where the cost can be much lower.

It's hard to tell from the video, but I wonder if it is synchronized by some rational number (e.g. 1:1, 3:2, etc.) with one of Jupiter's large moons and using repeated gravitational assists to boost inclination?

If so, how does it maintain synchrony; how does it change inclination but not period? Or does the period change as well? 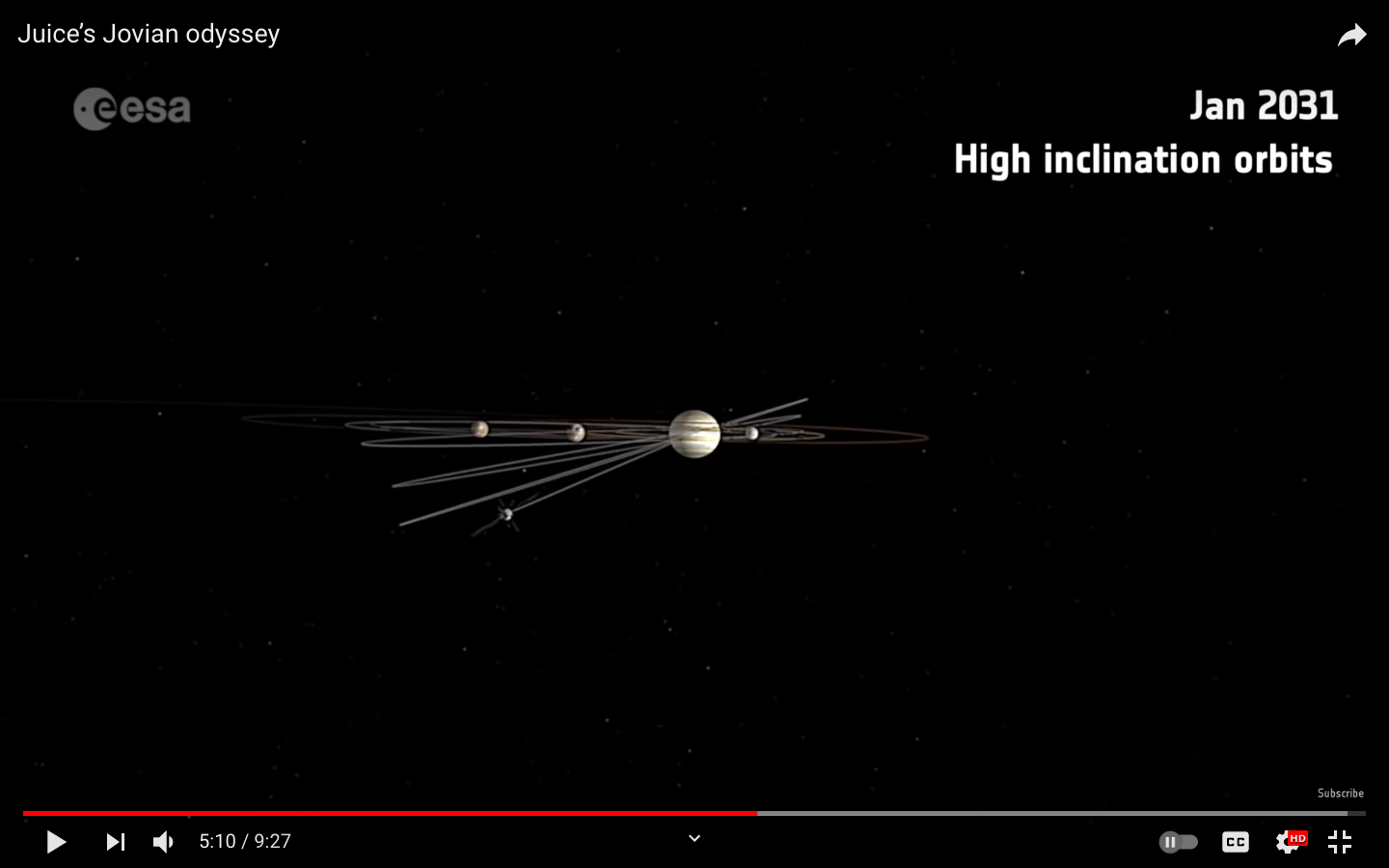 The inclination will be increased by several Callisto flybys.

Interesting that the JUICE team had a tradeoff - higher inclination but less Callisto mapping (becase the flybys would be over the same region), or less inclination but flybys over different Callisto areas.

You can compare the mission evolution readind "ESA JUICE Yellow book" of 2012.

I think you're correct that it's using repeated gravitational fly-bys in a synchronized orbit to do it.

Starting at 4:57 in the video, where the "high inclination orbits" portion of the mission begins, it's clear that each inclination change coincides with the orbiter meeting one of the moons. It then does the same trick in reverse to get back to equatorial orbit.

Per Heopps' answer and the linked ESA document, these are flybys of Callisto.

Passing the moon equatorially on the "outside" would be an accelerating gravity assist; passing it on the "inside" would be a decelerating one. So I believe that, as you approach the moon, there's some angle between the north pole and the left/inside edge of the moon that balances the increased north-south velocity component with the decreased counterclockwise component and leaves you with the same orbital period.

(If I'm wrong about that, I also believe that you could fire retrograde as you made the inclination flyby and still come out ahead because Pythagoras.)

15
Will Rosetta have to adjust its orbit around Chury due to the comet's coma and tails?
21
Why will JUICE take 8 years to reach Jupiter, longer than any earlier spacecraft?
12
How will the ion thruster powered Dawn spacecraft enter orbit around Ceres?
8
How will Akatsuki get into orbit around Venus?
6
The plane of the orbit of Juno around Jupiter is not the ecliptic plane. How did it get into this plane?
3
How will the Lucy spacecraft move from Jupiter's L4 to its L5 Trojan asteroids?
7
How will the SpaceX ITS return from Mars?
3
How will JWST maintain its elliptical orbit around L2?
9
How far will the debris cloud from Hayabusa-2's touch-and-go sample recovery travel around Ryugu? Will any have escaped to heliocentric orbit?