What would happen to an astronaut on the surface of Mars if a Carrington-event-like superflare hit the red planet?

If a coronal mass ejection with the intensity of the Carrington event1 or more hit Mars, what would happen to an astronaut on its surface who is too far from their base to return to in time? Assuming they have travelled too far in a Mars roving vehicle, and the solar flare hits now, would they survive, or for a limited time? Would the flare knock out the Mars roving vehicle's power unit? Mars has a thin atmosphere and weak magnetic fields.

As for the base, I'm assuming it is underground so that a solar flare wouldn't have much impact there.

1The Carrington Event was a powerful geomagnetic storm on September 1–2, 1859, during solar cycle 10 (1855–1867). A solar coronal mass ejection (CME) hit Earth's magnetosphere and induced the largest geomagnetic storm on record. The associated "white light flare" in the solar photosphere was observed and recorded by British astronomers Richard Carrington and Richard Hodgson. The storm caused strong auroral displays and wrought havoc with telegraph systems. The now-standard unique IAU identifier for this flare is SOL1859-09-01

There is a detailed review of space weather effects on humans in space by Townsend [2021]. They highlight several solar energetic particle (SEP) events that would have exceeded 30 day short-term organ damage limits from recent observations, all of which are likely to be weaker than the Carrington event. They also provide the dose limits for blood forming organs (BFOs), the heart, skin, eyes, and the central nervous system (CNS) for 30 days, 1 year, and career to give the reader a baseline reference. All these values fall in the 250--1500 mGy-Eq (milliGray-Equivalent) range for 30 days. Most of the exposure estimates for recent SEP events like that on July 14, 2000 are >1000 mGy, i.e., you'd exceed a 30 day dosage limit in a matter of a few minutes.

They examine a huge event in 775 AD that would would have caused radiation sickness and/or death in both men and women even with 40 g cm-2 of aluminum shielding (typical values used are ~5-10 g cm-2).

Mars is only ~50% further from the Sun than Earth. The radial dependence of SEP peak intensity depends on magnetic field line connection to the source, but typically falls as $r^{-3}$ [e.g., see Lario et al., 2013]. So the peak intensity at Mars would be up to 70% weaker than that seen at Earth.

My original answer was mostly written to emphasize that while one may get some protection from the Martian atmosphere and remnant magnetic fields, this does not account for the ~6-9 month trip from Earth to Mars where the astronauts would have very little, if any, protection from particles with energies >10 MeV.

This is all based on a worst case scenario, which must be planned for because as shown above for the Bastille Eay event, one event could literally end the mission before the astronauts even arive at Mars. Further, the Bastille Eay event generated ground level enhancements (GLEs), i.e., the event was so strong that charged particles (and neutrons) made it to the Earth's surface! That is, they penetrated past both Earth's magnetic field and its atmosphere. Mars' atmosphere is roughly ~1% of the volume of Earth's atmosphere. Earth's magnetic field exceeds 65,000 nT in places while Mars' peaks out around 1500 nT, i.e., Earth's is over 40 times stronger.

The above reasons are why my original answer argued that Mars would provide little protection against a strong event like that on Bastille Eay in 2000.

You would be relatively protected on Mars, due primarily to the atmosphere. Directly overhead, you have ~16 g/cm^2 of CO2 atmosphere on average, far more along lines of sight closer to the horizon, and the entire planet blocking radiation from below, in all reducing radiation exposure by several orders of magnitude. There's also a significant day/night variation that correlates with atmospheric pressure variations, so necessary surface activities may be performed at night to reduce risk, and of course Mars has plenty of material for shielding habitation structures. The atmosphere being thinnest overhead, that's where you'd want the most shielding...for Martian architecture, think thick, overhanging roofs.

"The Solar Particle Event on 10–13 September 2017: Spectral Reconstruction and Calculation of the Radiation Exposure in Aviation and Space" provides this plot contrasting exposure in interplanetary space with that expected on Mars and at high altitude in Earth's atmosphere: 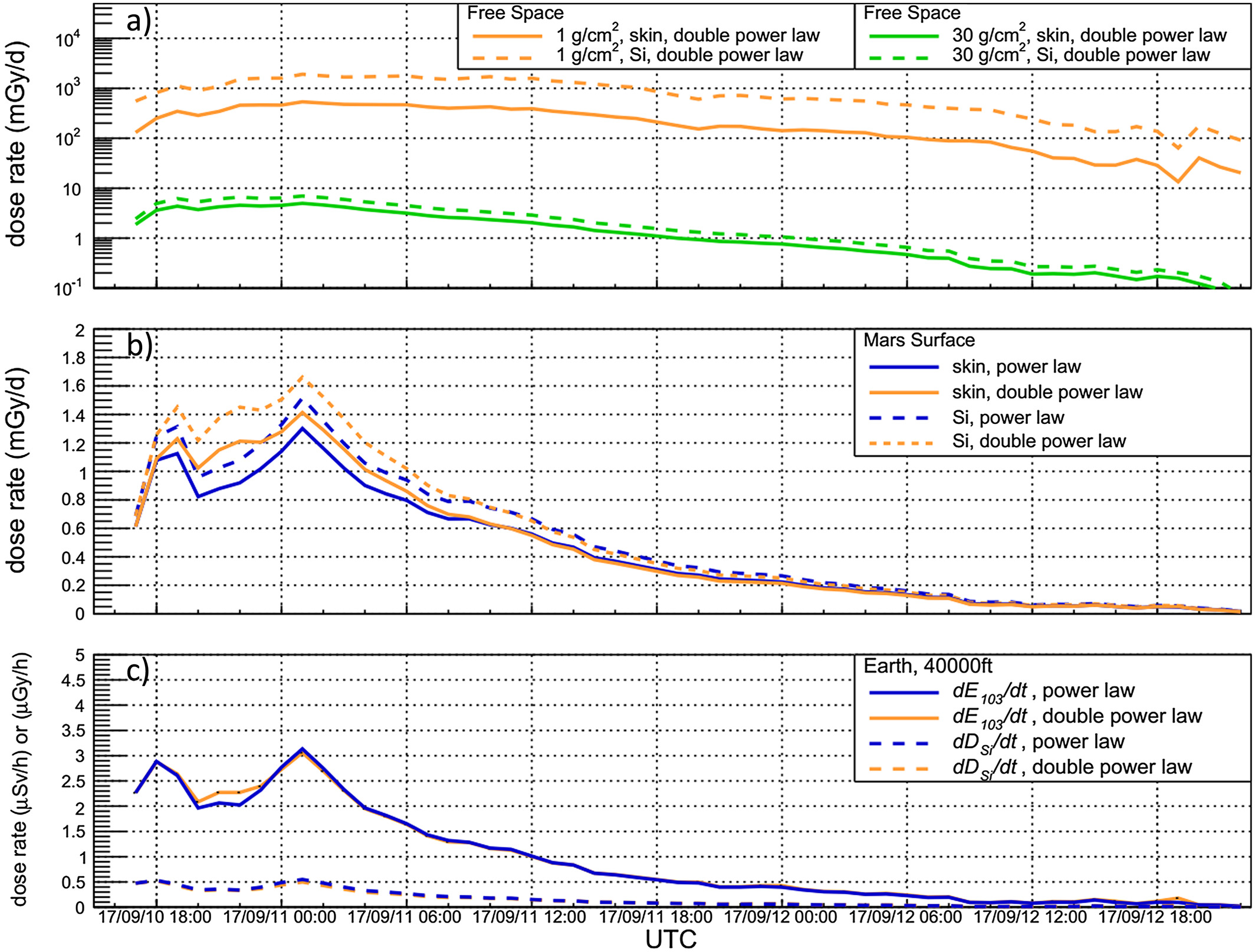 Radiation Risks in a Mission to Mars for a Solar Particle Event Similar to the AD 993/4 Event provides an analysis for a much larger event, comparable to one that occurred in AD 993-994. The conclusion is that the atmosphere, planet itself, and some additional shielding will provide sufficient protection against comparable events. The atmospheric shielding is enough that acute short-term effects would be avoided even without shielding.

In short, Mars colonists will have to pay attention to solar weather and take reasonable precautions, but should not have any particular difficulty dealing with these issues.

The simple answer is: it won't kill immediately but depending on the length of the exposure before reaching a shielded area, it would definitely cause radiation sickness which would result in a whole bunch of symptoms similar to the symptoms recorded after the exposure to radioactive fallout during the Chernobyl reactor accident (like cancer, neural damage of some kinds, etc.). But all of those problems are long-term effects.

The armosphere and the suits the astronauts are wearing would already provide a relatively good shielding against a big part of the radiation. So I would assume, that exposure of several hours would definitely be not healthy, but managable.

An underground base would easily protect the astronauts from radiation, since the regolith is very good at blocking it, which is why some plans of mars bases include burrying modules under ground.

Not the answer you're looking for? Browse other questions tagged mars the-sun medical solar-flares or ask your own question.

17
How are the astronauts in the ISS protected from solar flares?