Is New Shepard an orbit-capable first stage? Could an (albeit small) 2nd stage with propulsion be put on top that could put a smallsat into orbit?

This answer to How is New Shepard the first suborbital booster to successfully perform a powered vertical soft landing? discusses a potential differentiation between Falcon 9's first successful landing and New Shepard's.

and I assume that includes both the booster and the capsule.

Question: Suppose a roughly capsule shaped payload fairing was put on top and a short 2nd stage based on a spherical SRB was added in an attempt to put a smallsat payload into orbit. Could this work without a substantial redesign of the booster?

This answer to New Shepard payload capacity to orbit? says:

As far as I know, there is no second stage that could reach orbit from a New Shepard, even disregarding the issue of size. It would need to very nearly be a SSTO. The Falcon 9 is well known for staging early, this being part of what makes it feasible to recover its booster, and for ASDS landings its booster is about 150 km downrange and moving at around 2 km/s when it crosses 100 km altitude, where New Shepard reaches a vertical peak at effectively zero velocity.

While it suggests that the payload capacity is low if at all, there are no numbers to support anything definitive, and the maximum horiziontal velocity of New Shephard when fully fueled and with a different second stage isn't addressed there at all.

Answers here should support conclusions with at least envelope-back level calculations. Thanks!

I think we can all agree that the crux of this question is in the New Shepard specifications, feel free to offer improvements to these. Here are the ones I arrived at (note: there is no recovery of the booster in this analysis):

Booster Masses: This reddit thread (that is now 5 yrs old) contains some estimates of tank volume and empty booster mass and I particularly like the comment from poster u/saabstory88: 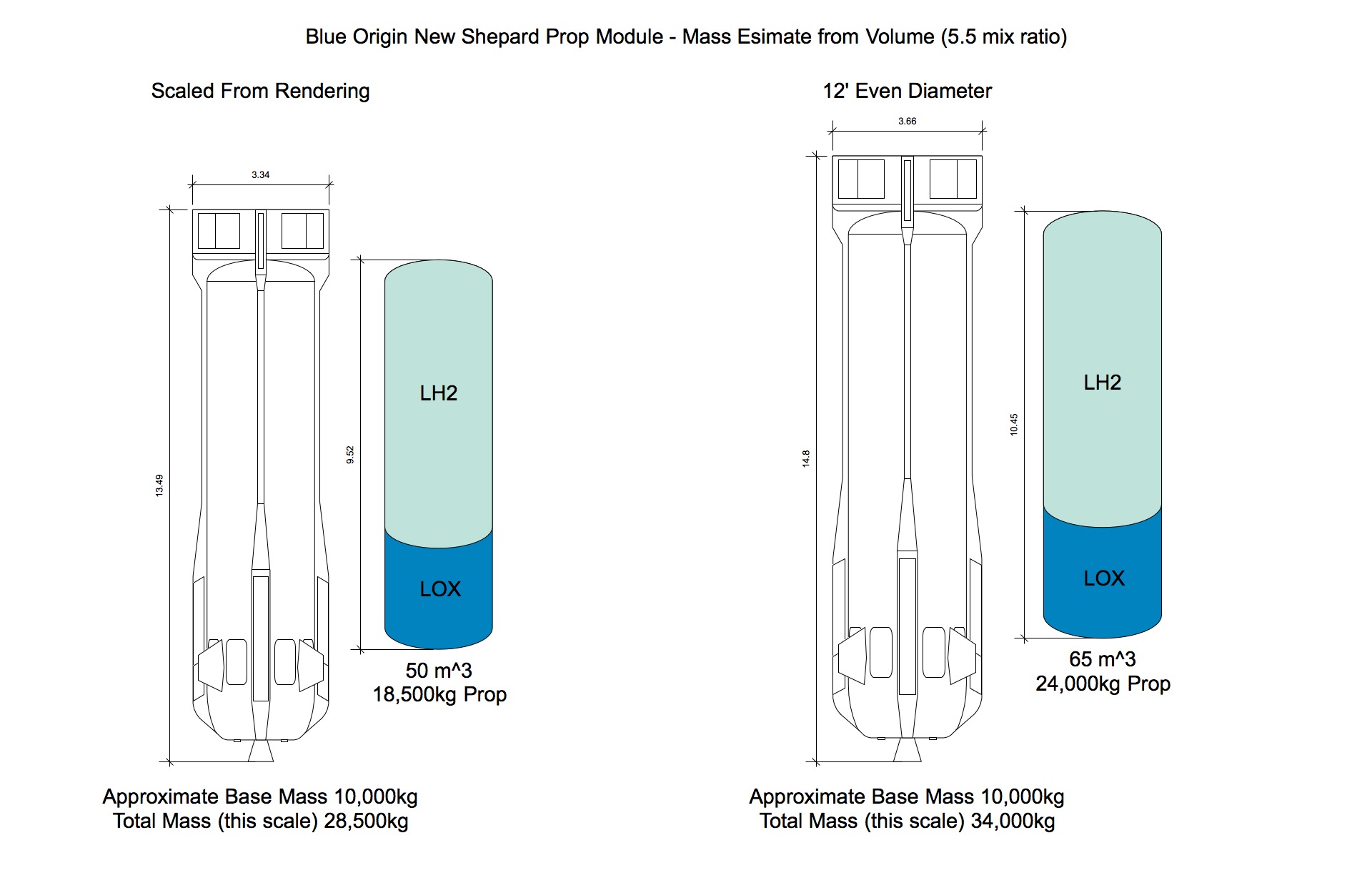 We know two numbers for sure. The max thrust of the BE-3 is 489kn, and the minimum thrust is 90kn. Assuming that the stage and landing needs to be just a little heavier than the engine can lift at minimum throttle (to be able to hover), then 10,000kg seems like the reasonable base estimate

This other schematic from a less than convincing authority contains a scale:

The top of the tanks seems pretty concrete between the two diagrams (the curvature right below the grid ring unit). It is a bit more ambiguous for the bottom of the tanks. I used a frame from this test-fire video from 2013 and superimposed the exposed engine onto the scale-diagram: 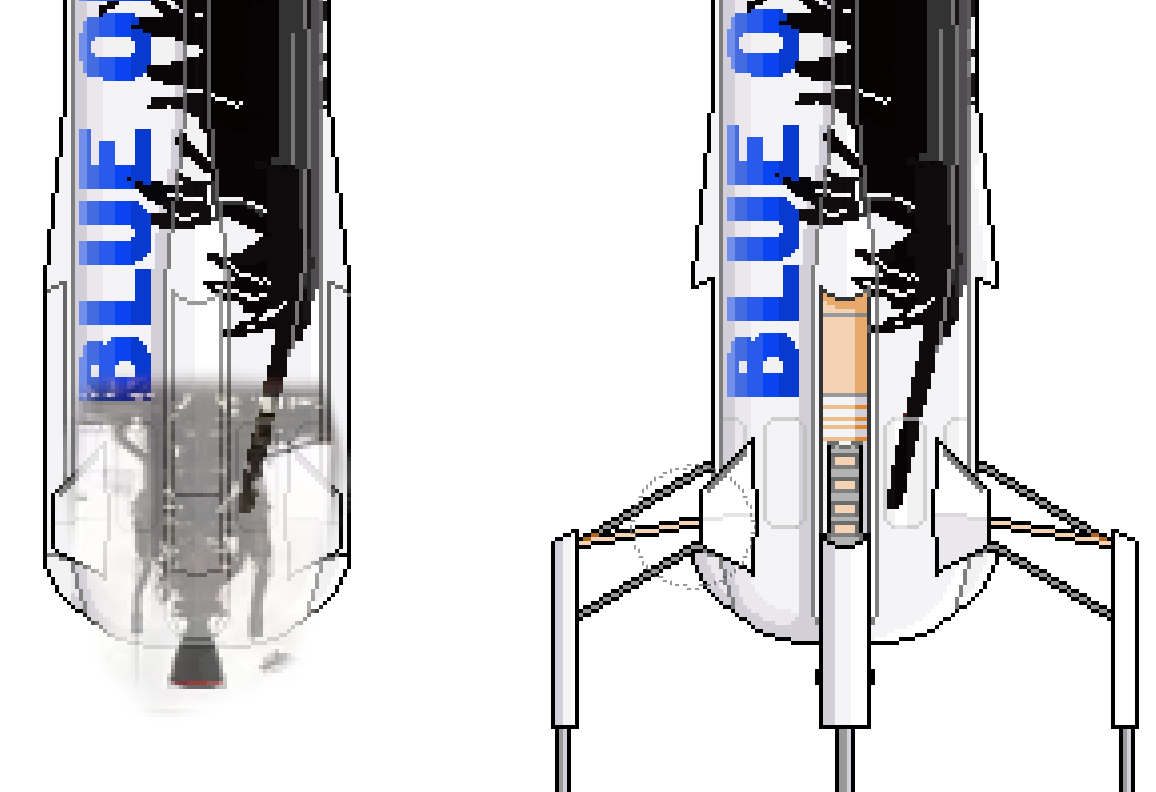 Which seems to place the bottom of the tanks a little higher than the previous diagram. Either way I approximated the tanks (bulk) as a cylinder with a 2.8317 m diameter and a height of 9.3607 m for a volume of 59$m^3$.

This was combined with this answer to Use of different fuels for stages of Saturn V:

Second Stage: I chose the STAR48BV (TE-M-940-1, pg. 104) because it has thrust vector control capabilities and available specs (and successful history). This configuration looks something like this (proper relative scale):

Launch Simulation: I built a very simple launch simulator to test the vehicle's capabilities. Some 'features' of the sim that are notable (for the inaccuracies they may introduce):

Here is a table of key inputs to the launch simulator that haven't already been mentioned: 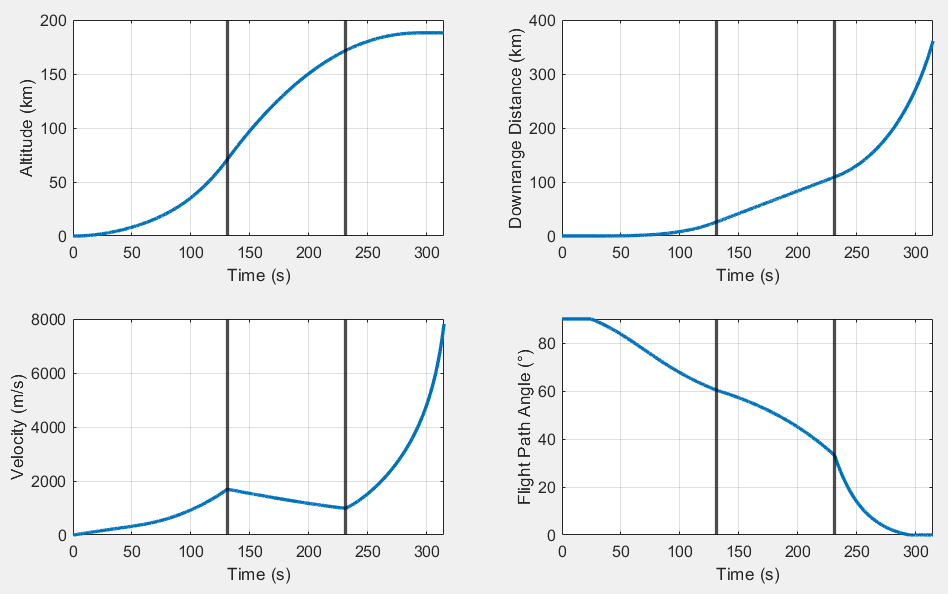 WEll my answer is yes, it- "could" be done

Not the answer you're looking for? Browse other questions tagged record srb new-shepard smallsat nonstandard-payload or ask your own question.

7
Use of different fuels for stages of Saturn V
6
How do spherical SRB's compare to long skinny ones? What do their thrust curves look like?
3
How can I estimate the Coefficient of Drag on a Saturn V rocket, a simulator or some data would be pretty awesome
1
How is New Shepard the first suborbital booster to successfully perform a powered vertical soft landing?
-1
New Shepard payload capacity to orbit?

13
Why does Blue Origin land the crew capsule separate from the booster?
10
How are SRBs and solid rocket motors transported safely? Do they ever end up on trucks driven down public highways?
1
How is New Shepard the first suborbital booster to successfully perform a powered vertical soft landing?