how does the direct fusion drive generate electric power?

According to its Wikipedia page, about 30% of the power "generated" by the DFD reactor can be used for electrical power. But wouldn't that make it have net positive energy? Since we are still working on fusion power that produces energy, this doesn't make sense. How does the DFD concept produce energy?

The Direct Fusion Drive (DFD) is a conceptual fusion-powered spacecraft engine, named for its ability to produce thrust from fusion without going through an intermediary electricity-generating step.

The key word here being "conceptual". It doesn't exist. It's a "what if" design. What if we had working fusion reactors, how would be build a spacecraft engine? Normally the fusion drive would use thermal energy to generate electricity which would power a conventional ion thruster. Their concept turns the thermal energy directly into kinetic energy to fling ions out the back (thrust) with leftover thermal energy converted to electricity to power the spacecraft. Princeton Satellite Systems has an animation of how the drive is proposed to work.

This requires a compact fusion reactor which produces an energy surplus for long periods of time. We don't have that.

Many physics challenges remain before the RMFo-heated FRC [odd-parity Rotating Magnetic Field Field-Reversed Configuration] can be developed into a practical reactor. The predictions of excellent energy confinement and stability and of efficient electron and ion heating to fusion-relevant temperatures, must be validated.

Which is to say, like all things fusion, it doesn't work yet. They have a great illustration of how they hope it will work. 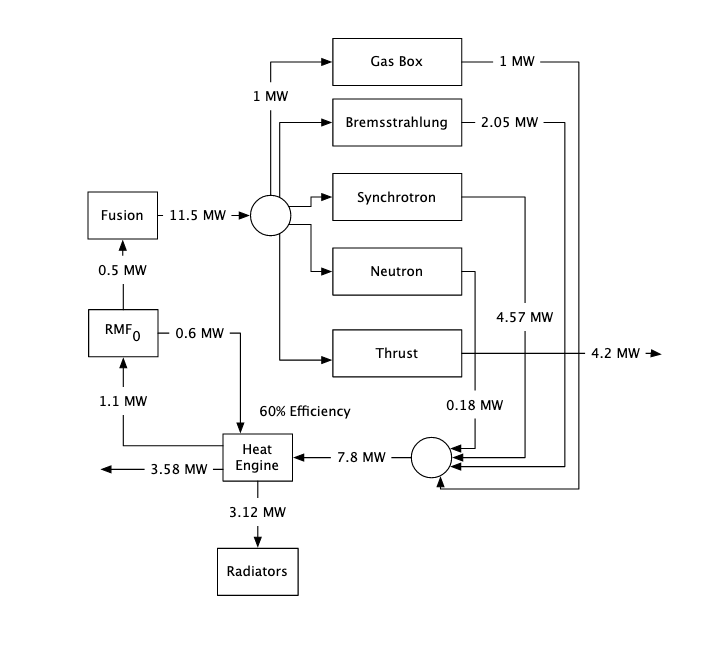 They propose the system will produce 4.2 MW for the thruster. That extra 3.58 MW coming out of the heat engine and going nowhere is surplus "electric power for non-engine applications".

In their conclusions they explain there's still a ways to go before demonstrating net fusion power.

Near term work will include the completion of the PFRC-2 [Princeton Field-Reversed Configuration reactor 2] ion heating experiment, detailed trajectory analysis, and subsystem designs for the engine components. Design of PFRC-3 will begin once the ion heating experiments are complete. This will be larger than PFRC-2 and demonstrate higher temperatures and pressures. PFRC-4 will demonstrate fusion power generation.

Princeton Fusion Systems is currently working on PFRC-2 which "could provide the basis for continued development toward a PFRC prototype commercial power generator", emphasis on "could". This is part of the Advanced Research Projects Agency-Energy (ARPA-E) Galvanizing Advances in Market-Aligned Fusion for an Overabundance of Watts (GAMOW) project which is funding numerous small fusion related projects.

It produces energy from fusion. Making a small stable fusion energy source is a problem humans have not solved yet (making large stable fusion energy sources is easy, although a moderately significant engineering challenge), but we have no reason to believe such a thing is not possible. DFD is predicated on both being able to solve that problem and, once it is solved, using some of the resulting power directly to drive, effectively, a rocket, rather than by, say, generating electrical power which is then used to run an ion drive or something.

Not the answer you're looking for? Browse other questions tagged propulsion fusion or ask your own question.

11
Could Earth-lunar flybys be repeated consecutively without the use of propellant?
10
What are the technical specifications of modern reaction control systems?
12
Rocket Engine Plumbing: Still don't understand the Full Flow Staged Combustion Cycle
6
Hows does “Glenn Research Center's sapphire refractive secondary concentrator” work?
28
Would a grinding machine be a simple and workable propulsion system for an interplanetary spacecraft?
5
Could the helical engine work?
7
Is the propulsion for the Scorpion nuclear-thermal-electric ship concept viable and credible?
0
How much additional thrust could the electron gun produce for electric sail propulsion?
0
Powering pulsed Ion Thruster
2
Potential Fusion Drive system calculation issue