Using a sling whirled around above the head, could someone on the moon throw a stone into orbit?

Similar to this question except not about using a machine: What payloads and launch speeds could a sling launcher get using modern materials on the Moon?

How fast could a stone be thrown using a sling while standing on the moon? Could you launch a rock into lunar orbit with a very long slingshot? Google has nothing about this.

Edit: I only said 'of the type whirled around above the head' to clarify that I didn't mean a catapult. Don't assume that that the solution needs to involve anything whirling above the head.

Using a sling whirled around above the head, could someone on the moon throw a stone into orbit?

tl;dr: probably deeply suborbital; 1192 meters, 38 seconds, either straight up or downrange at 45 degrees.

And of course even if you had superhuman sling skills, your trajectory would either fly off into space (lunar C3 > 0) or return on an elliptical (C3 <0) trajectory and intersect the surface somewhere. Standing on the Moon a horizontal throw at 1680 m/s would theoretically be in circular orbit at an altitude of 2 meters, but it would just slam into some crater edge or mountain.

The same speed as it could be thrown anywhere else? There's no $g$ in $\omega \times r$

The main limiting factor on Earth is air resistance. A stronger thrower could lob a heavier rock at similar speed, but the range of speeds is very limited by $v^2$ in air drag equation. On the Moon you could pump power into spin of the sling as long as you can control it and it doesn't break.

is important as well, and the "helicopter method" shown below does just that!

In the hands of an expert, a heavy sling bullet or stone could reach speeds of up to 100 mph (160 km/h): "The biggest sling stones are very powerful — they could literally take off the top of your head," Reid said.

That's 44 m/sec, and the Tod's Workshop video Is a sling as powerful as a gun? demonstrates a 125 ft/sec ~ 38 m/s measurement without trying very hard.

Okay, but how suborbital would 44 m/s get you?

If we already know we're profoundly suborbital in terms of speed, we can estimate the maximum altitude (shooting straight up, probably killing yourself when it falls back on you) from conservation of energy, and maximum distance from a parabolic trajectory at 45 degrees.

The likelihood that it hits you on the way down is therefore small.

Wikipedia's Kinematic quantities of projectile motion give us

In both cases the flight time is about 38 seconds.

This will be much further than Allan Shephard's golf ball shot 1, 2 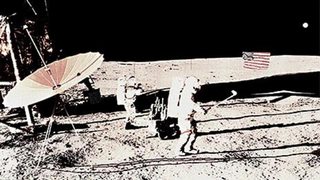 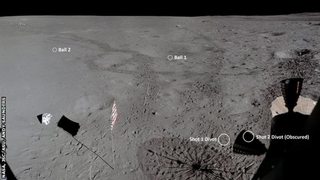 But seriously... in a Space Suit?

The "helicopter" technique seems best suited for suited astronauts. As long as the sling is not too long, you get it moving overhead with a smooth arm motion then just use small deflections to speed it up overhead.

You will be needing either some good wrist articulation from your suit, or have to make do with using elbow or shoulder to pump speed into the helicopter.

I think this could work, and will get you close to a 1 kilometer impact distance and 38 second flight time of your very suborbital projectile. 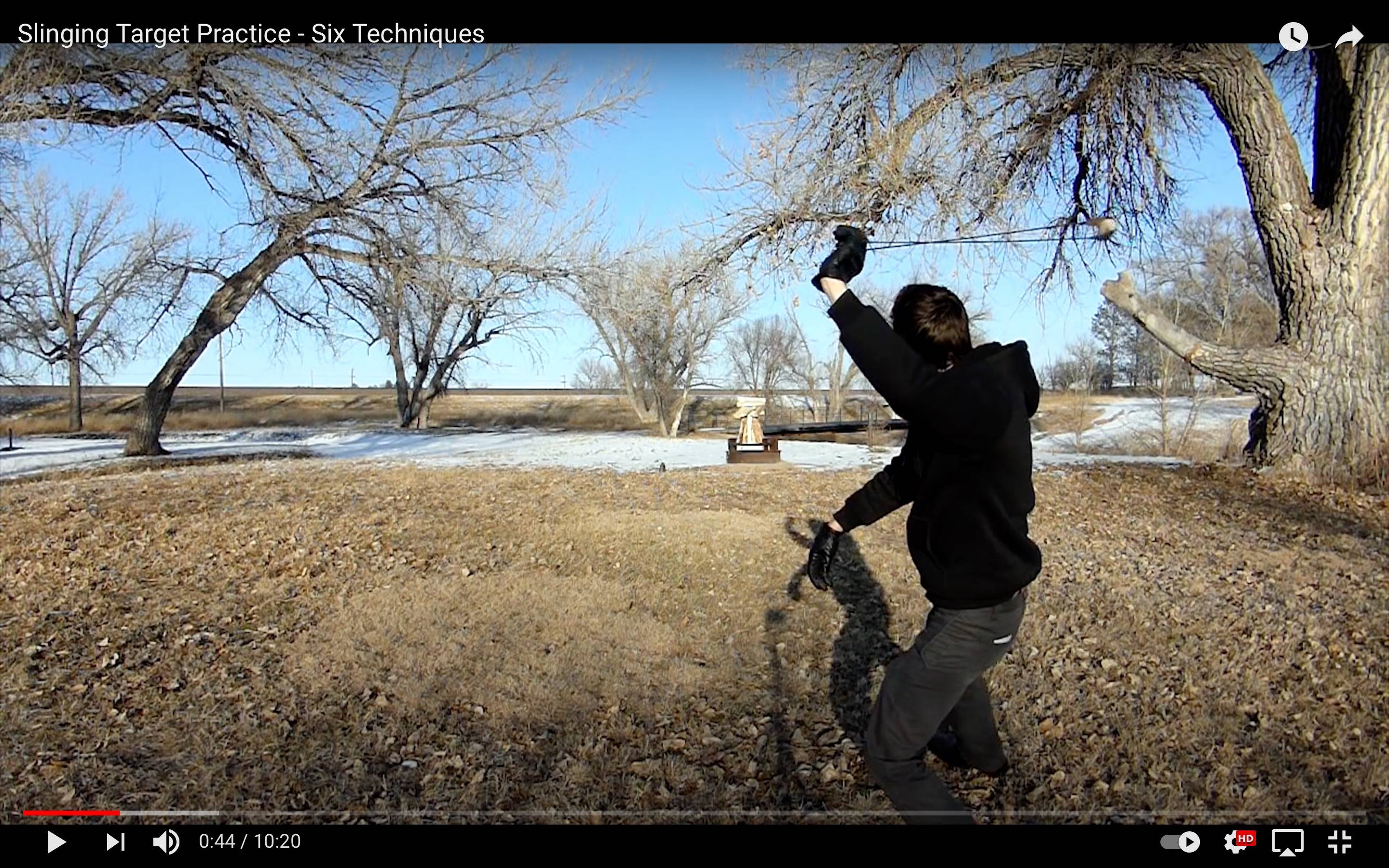 above: Helicopter technique, below: all six for comparison 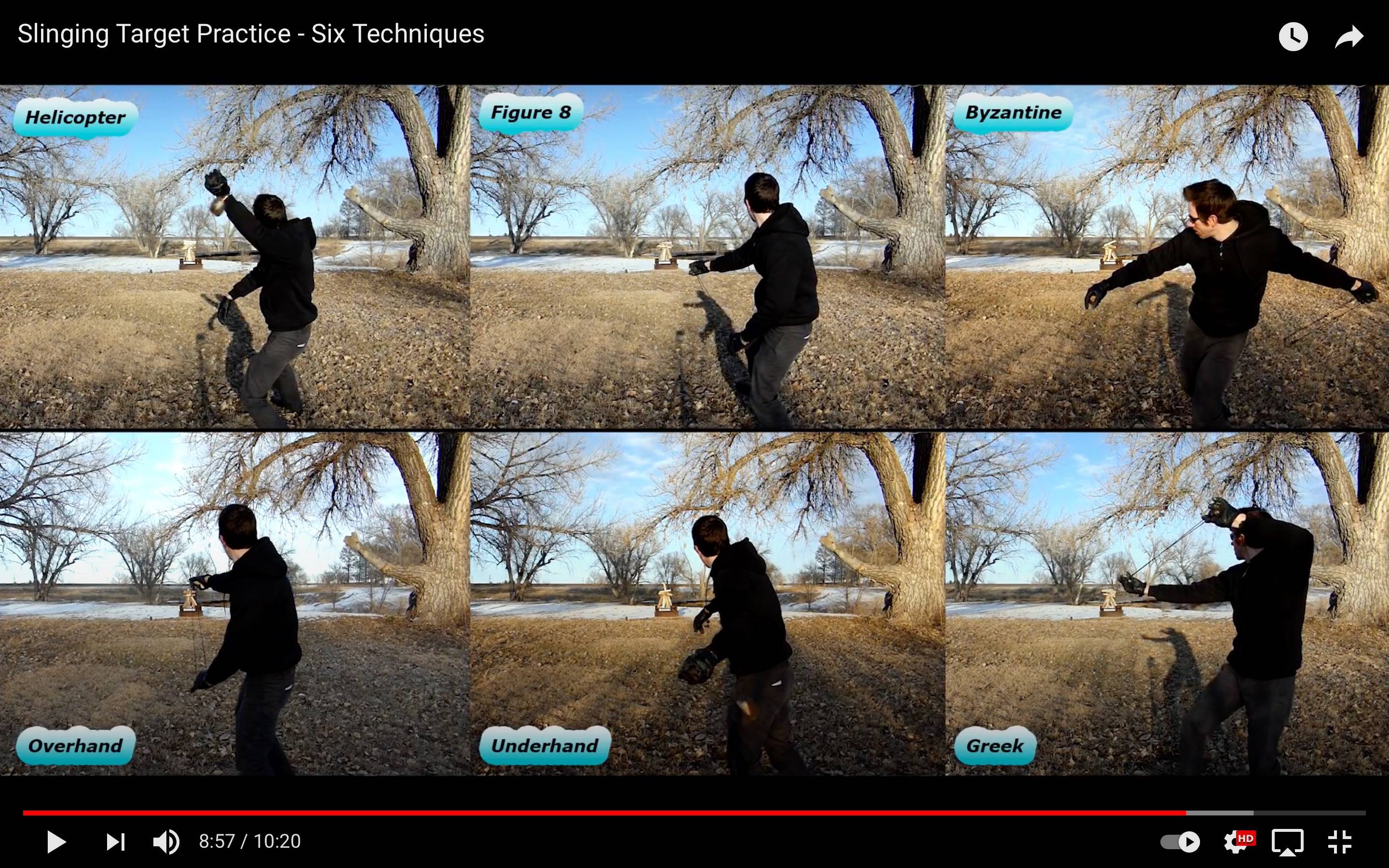 Looking at the question you are linking I would be inclined to say that it is possible assuming the astronaut's suit is flexible enough and the thrower has enough endurance. (Although, remember, the low periapsis. Combine that with the instability of lunar orbits and you can't say that it will stay in orbit!)

I don't think spinning it above your head is the right approach. Rather, look at the hammer throw. Take your pebble (the mass limit is going to be pretty low), hook a cable to it. Most of the cable is on a spool on your suit. Stand on a peak as there will be some sag of the cable. Start spinning around, maintain a constant velocity but keep letting out cable. The pebble reaches orbital speed without exerting all that much force on the spinner.

Not the answer you're looking for? Browse other questions tagged orbital-mechanics launch reduced-gravity-sports moonwalking weapon or ask your own question.

9
Is this the golf ball that Alan Shepard hit on the Moon?
6
What payloads and launch speeds could a sling launcher get using modern materials on the Moon?
3
Lunar satellite navigation system

5
Could the Bloodhound Rocket Car be launched into orbit?
6
How much accuracy is required to achieve interplanetary orbit without adjustment or deceleration?
8
How will Akatsuki get into orbit around Venus?
26
Is it possible to have an orbit around the earth and the moon
5
What size payloads could we feasibly launch from the moon with a mass driver?
47
Why did Saturn V not head straight to the moon?
4
Question about orbital mechanics and trajectories for a space infrastructure project/climate adaption idea
21
Is it possible to throw a baseball so hard it circles the earth above your head?