Are relay stations possible between planets?

I recently participated in a hackathon where we were looking at various space-related challenges and one that we considered was communications between Earth and Mars. The hackathon is over now but I still think about the problem now and then.

Would it be possible to set up one or more relay stations to facilitate communication between Earth and Mars and, in the general case, between any two planets within our solar system? (Let's leave the problem of communicating with extra-solar planets for another time.)

Given that the planets are in known orbits, their positions can be accurately predicted. So far so good. Then life starts getting complicated. Each orbit is unique and a given planet can be fairly close to or very distant from another depending on where each planet is in its orbit. They can easily be on opposite sides of the sun, making direct communication impossible (as I understand it).

I know that the solar system itself moves and carries the planets, moon, asteroids, etc. along with it. Each galaxy moves too with galaxies gradually moving away from one another as the universe expands. Am I right in assuming this further complicates things or can this be ignored since the solar system would carry each relay station with it, just as it already carries the planets with it?

Bottom line: is there any place a relay station could be put to simplify communications between Earth and Mars? Or do the planets simply have to hold off and wait to communicate until they are in conjunction?

This is an interesting question and can be answered separately from the related questions.

Given that the planets are in known orbits, their positions can be accurately predicted... and a given planet can be fairly close to or very distant from another... (t)hey can easily be on opposite sides of the sun, making direct communication impossible...

Bottom line: is there any place a relay station could be put to simplify communications between Earth and Mars? Or do the planets simply have to hold off and wait to communicate until they are in conjunction?

Yes, there are many! The relay station would either have to have a big (but light-weight mesh) dish if it used a radio link to Mars, or an optical communications link which would be smaller and future-compatible.

Why solar conjunctions are a problem.

Deep space communications dishes on Earth don't want to point too close to the Sun due mostly to radio noise and the risk of heat. Most dishes are not specularly reflective to light (visible or infrared) so they won't concentrate sunlight (true also for commercial satellite dishes) but the noise from the sun and the distortion of the signals passing through the millions of kilometers of charged particles near the Sun make communications within a few degrees of the Sun difficult.

Solar conjunction was difficult for communications because the radio signals traveling between the Earth and Jupiter passed through regions of high and variable charged-particle density close to the Sun.

The teams running NASA's three active Mars orbiters and two Mars rovers will refrain from sending commands to their spacecraft from about June 7 to June 21. 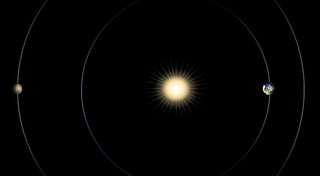 This diagram illustrates the positions of Mars, Earth and the sun during a period that occurs approximately every 26 months, when Mars passes almost directly behind the sun from Earth's perspective. This arrangement, and the period during which it occurs, is called Mars solar conjunction. Radio transmissions between the two planets during conjunction are at risk of being corrupted by the sun's interference, so NASA Mars missions have a moratorium on sending commands to spacecraft on the surface of Mars or in orbit around Mars. Credit: NASA/JPL-Caltech

Between August 2014 and January 2016 one or both STEREO spacecraft will have their high gain antenna pointed at an angle a few degrees away from Earth to keep the antenna feed horn from getting too hot. This will result in greatly reduced telemetry rates while the antennas operate on one of their lower power side lobes instead of the main lobe normally used. However, all the STEREO science instruments will be able to provide a subset of their usual data during these periods.

For all three spacecraft, the noise in the post-fit rangerate residuals from the orbit determination was analysed. At small Sun-Earth-Probe (SEP) angles the level was almost two orders of magnitude higher than normal. The main objective was to characterise the Doppler (rangerate) noise as a function of SEP angle. At least then the range-rate data can be appropriately weighted within the orbit determination so that the solution uncertainties are realistic.

For VEX, some intervals of particularly noisy Doppler data could be correlated with unusual solar activity. 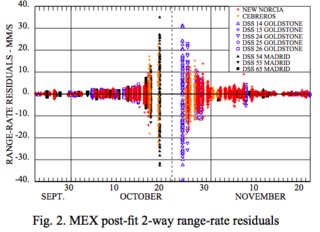 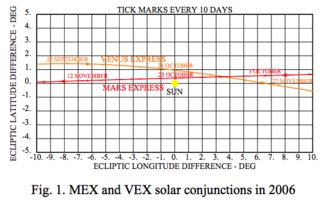 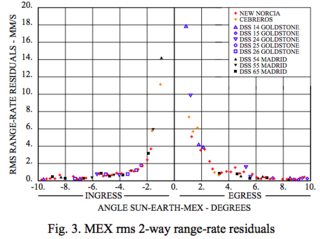 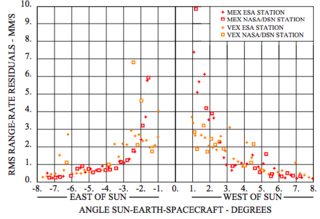 Optical communications (instead of radio) helpful for two reasons here:

On the Earth end of the link, it is likely that receivers will be space-based telescopes rather than ground based: Will future deep space optical communications "ground stations" actually be in space, or on the ground?

Without the atmosphere, a telescope could potentially look very close to the Sun to receive optical signals. The laser wavelength will be extremely narrow and in the infrared, so a filter will cut down any scattered light by a perhaps a factor of 1000 or even more, and since we look at the high frequency modulation rather than the DC component, some kinds of modulations can be pulled out of a much brighter background.

However, not sure about pulse position modulation:

This looks like a job for Elon Musk. An array of solar powered satellites (possibly above the orbital plane) could be in proximity of both planets to form a mesh relay. This would create a network allowing continuous communication through solar conjunctions or other line of sight barriers.

6
Could a (differently) inclined orbit remain above a Lunar pole half of every revolution?
4
Calculate communications window for LEO
3
Earth-Mars Radio Blackout: Is it possible to define an extended solar radius to solve this as a geometric problem?
4
Satellites around outer planets that act like amplifier to signals from voyager like objects
3
Will Optical communications be possible between Columbus' Ka-band (COLKa) Terminal at the ISS and EDRS?
1
Receiver and transmitter in RF/optic satellite communication: distance vs data rate v2