What is a gravity gradient?

The statement: 'For most of that day, Mir remained in a "gravity gradient," (sic) which basically means that the most massive part of Mir naturally pointed toward Earth.' is in https://history.nasa.gov/SP-4225/nasa4/nasa4.htm .

I don't understand this at all. Why would the most massive part of Mir be naturally pointed toward Earth? We know Aristotle was wrong in saying that a more massive object has a greater acceleration when in free fall. So what is going on?

Wikipedia https://en.wikipedia.org/wiki/Gravity-gradient_stabilization makes no mention of a most massive part in its very short article about it.

My question is, what does it mean to be 'in a "gravity gradient"'?

Due to the fact that gravity follows an inverse square law with distance. So an object twice as far away from the centre of another object will only feel half of the gravitational force.

So for a long tubular space station pointing at the centre of the Earth the end nearest the Earth will feel a greater force of gravity than the end furthest from the Earth. The effect is tiny, but over time can create a noticeable effect on space craft orientation. The effect is the same one that would cause "spaghettification" of anything in close proximity to a black hole (although obviously dozens of orders of magnitude less intense). 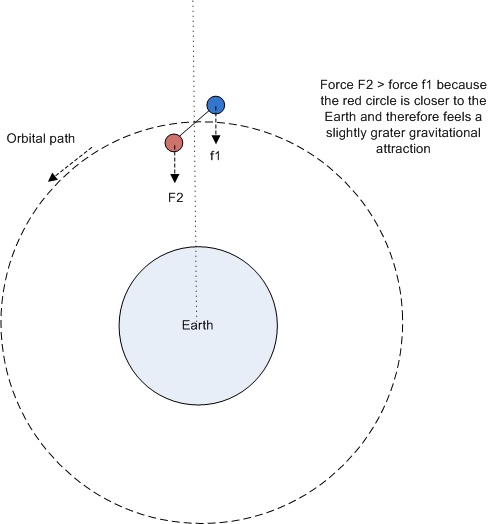 Having the "heavy end" down minimises the rotational inertia of the object.

This is actually quite interesting problem, which has a few levels to it:

In order to analyze the situation, one need to consider non-inertial coordinate frame. Either rotating in case of space station or constantly accelerating in case of vertical free fall. In both situations there will be gravity force + an inertial force. Both of them acts proportional to the mass and at all single points of the body, so it is easy to add them together in each point.

For a space station, the inertial force is centrifugal one. Proportional to angular velocity of the orbit (constant, let's not make things more complicated by elliptical orbits) and distance from Earth centre. Gravity is inversely proportional to square of this distance. Total force on any point with mas $m_x$ will be then: $$ F_x = F_G - F_C = m_x \left[{G\cdot M_E \over r_x^2} - \omega^2\cdot r_x\right]\,, $$ $r_x$ is distance from earth centre to the respective point, $\omega$ is angular speed of reference frame rotation, $G$ gravitational constant and $M_E$ Earth mass. Positive force points inwards into Earth centre.

Note that resulting force points upwards for positive $a_x$ and downwards for negative $a_x$. So what is holding a space station in its orbit then? As soon as some perturbation shifts it a bit lower, it starts accelerating down to the ground. Or does it? Turns out that there is one more inertial force in the rotating frame, namely Coriolis force, which acts on objects which move inside the reference frame.

So if object starts to "fall down" from its orbit, this extra velocity results in Coriolis force accelerating it in direction of frame rotation and this tangential component in turn induces Coriolis force upwards. At the end this object starts "orbiting" a point in rotating reference frame located at original radius $r$. What does it mean? Well, an elliptical orbit (maybe there is something to epicycles at the end :) ). But to not complicate things further, we will analyze only static configurations in perfectly circular orbit (any mas below equilibrium height pulling down will be compensated by other mass above this height pulling up) where Coriolis force equals zero.

Staying with gravitational and centrifugal forces only, let's integrate the expression with respect to $a_x$. The result will be potential energy of a point mass in this pseudopotential created by combination of gravitational and centrifugal force with respect to distance from nominal orbit radius: $$ E_x=-{3G\cdot M_E\over 2r^3}\cdot m_x\cdot a_x^2 \cdot {r+a_x/3\over r+a_x}\,. $$ Zero energy level was set for zero $a_x$, that is at the "nominal" orbit radius. Any mass above or below it will have negative potential energy.

Note that last fraction will be really close to 1 for $a_x \ll r$ (size of station compared to distance to Earth centre) and remaining term is a quadratic potential without any preference for up or down ($a_x$ is squared).

So the lowest energy is with as much of the mass sticking as much up or down as possible, but without any preference for up or down.

The ${3G\cdot M_E\over 2r^3}$ equals numerically $2\,\rm \mu J/(kg\cdot m^2)$. To get a feeling how much it is: it is similar to a rotational energy of object revolving around its own axis with period about 1 hour. So this first-order tidal stabilization is strong enough to have noticeable effect on such slow movement (roughly independently of size or mass of spacecraft/spacestation).

The up and down preference comes from the last term. It can be approximated as $1-2a_x/3r$, so same mass sticking the same distance above $r$ will have lower energy than when placed same distance below (the the energy is negative, so bigger coefficient means lower energy).

In avoid forces pushing object away from circular orbit mass distribution needs to stay such that total energy is a its maximum (zero derivative) with respect to vertical shift. Any upside down turn needs to be balanced by realigning center of gravity. Generally, "heavier" part here needs to be interpreted in terms of moments of inertia or, for the last fraction, third power of distance from center of mass. So it there is not much specific to be stated for generic object without taking its detailed geometry into account.

Playing with some specific numbers for two small spheres in vertical position either heavier down or up results in relative differences in energy at order of 0.1‰ to 0.01‰ preferring heavier at the bottom. So difference is really small, but existing.

And to get back to free fall. (Lets neglect the Earth rotation -- either free falling at the pole or high from the space without any tangential velocity -- to get the other extreme case). Here the inertial force is caused by constant acceleration by gravity and it is simply equal to acceleration of coordinate frame times mass independent of $a_x$: $$ F_{x,fall} = F_G - F_A = m_x \left[{G\cdot M_E \over (r+a_x)^2} - {G\cdot M_E \over r^2}\right]\,, $$ After integrating with respect to $a_x$ we get a similar expression for energy as above: $$ E_{x,fall}=-{G\cdot M_E\over r^3}\cdot m_x\cdot a_x^2 \cdot {1\over 1+a_x/r}\simeq-{G\cdot M_E\over r^3}\cdot m_x\cdot a_x^2 \cdot \left(1 - {a_x\over r}\right)\,. $$ So the quadratic potential is in this situation weaker by factor 1.5 compared to orbiting case and higher order up--down preference factor is higher by the same factor, otherwise no difference.

Not the answer you're looking for? Browse other questions tagged gravity mir or ask your own question.

6
How does gravity-gradient stabilization work?
4
Rotating in orbit?

10
Back to Earth's gravity, what astronauts do?
10
Besides Luna, what celestial bodies exhibit lumpy gravity?
33
What causes microgravity (i.e. non-zero gravity) in orbit?
5
How can gravity gradient forces be calculated?
4
3-axis gravity gradient stabilization?
0
Synthesizing gravity
5
What is the gravity inside a rotating cylinder?
5
What living organisms adapt to 0 gravity?
1
What counts as "0 mGal" in these gravity maps?