If used on an object on the moon, how cold would an ultrawhite painted object get?

Recently in the media https://www.google.com/amp/s/www.bbc.co.uk/news/science-environment-56749105.amp very white paint has been reported on that can reduce an object's temperature below ambient.

If used on an object on the Moon, assuming that it's located in a standard position (not on the poles, not in a deep pit) what temperature range would it experience?

The Purdue University press release The whitest paint is here – and it’s the coolest. Literally. and the BBC's 'Whitest ever' paint reflects 98% of sunlight are some sources of information.

The images below are from a low-resolution version of a figure in the paywalled paper Ultrawhite BaSO4 Paints and Films for Remarkable Daytime Subambient Radiative Cooling. I've included the full abstract below, but one key sentence is:

reaches an ultrahigh solar reflectance of 97.6%

and the other is

and a high sky window emissivity of 0.96

Presumably the "sky window" is a portion of the thermal IR spectrum for which Earth's sky is somewhat transparent; cf. a description of a "gedanken thermometer" in How cold is the Martian sky at night? Or the day for that matter?:

If you take a simple infrared "thermometer" which is actually a lot like a bolometer and point it at a clear sky, it says "cold!" because in the wavelength range that it's using (roughly 5 to 15 microns) the Earth's atmosphere is partially transparent and not really an effective blackbody radiator, so the "thermometer" is really somewhat exposed to the cold of space. Point it at a cloud, and it will register "not as cold". It's (roughly) why clear nights are colder than cloudy nights.

I've zoomed and sharpened a bit of the image below to show two of the paint's "secret sauces" that make it better at staying cool, which are also discussed at length in @Puffin's answer: 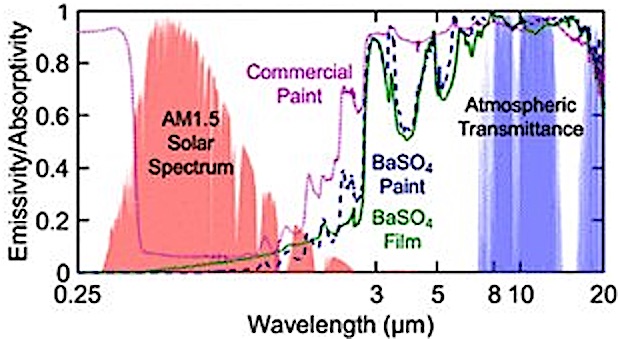 From How much is really known about those liquid metal droplets orbiting the Earth? (e.g. sizes, composition, orbits...) Are any actually tracked?

The equilibrium temperature of a spherical cow in space can be derived from here (found here):

Two things would interfere with this.

So it is not clear with all the extra UV heating from the Sun and thermal heating from the Surface if you could just slap this paint on something on the Moon and it would get cold. It will take a detailed thermal analysis and possibly a tweak to the UV reflectivity of the paint material itself.

Radiative cooling is a passive cooling technology that offers great promises to reduce space cooling cost, combat the urban island effect, and alleviate the global warming. To achieve passive daytime radiative cooling, current state-of-the-art solutions often utilize complicated multilayer structures or a reflective metal layer, limiting their applications in many fields. Attempts have been made to achieve passive daytime radiative cooling with single-layer paints, but they often require a thick coating or show partial daytime cooling. In this work, we experimentally demonstrate remarkable full-daytime subambient cooling performance with both BaSO4 nanoparticle films and BaSO4 nanocomposite paints. BaSO4 has a high electron band gap for low solar absorptance and phonon resonance at 9 μm for high sky window emissivity. With an appropriate particle size and a broad particle size distribution, the BaSO4 nanoparticle film reaches an ultrahigh solar reflectance of 97.6% and a high sky window emissivity of 0.96. During field tests, the BaSO4 film stays more than 4.5 °C below ambient temperature or achieves an average cooling power of 117 W/m2. The BaSO4-acrylic paint is developed with a 60% volume concentration to enhance the reliability in outdoor applications, achieving a solar reflectance of 98.1% and a sky window emissivity of 0.95. Field tests indicate similar cooling performance to the BaSO4 films. Overall, our BaSO4-acrylic paint shows a standard figure of merit of 0.77, which is among the highest of radiative cooling solutions while providing great reliability, convenient paint form, ease of use, and compatibility with the commercial paint fabrication process. 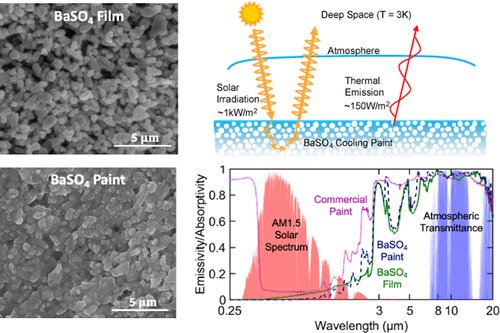 13
How cold is the Martian sky at night? Or the day for that matter?
11
How much is known about those liquid metal droplets orbiting the Earth? (e.g. sizes, composition, orbits...) Are any actually tracked?
6
Advantages/disadvantages of wood for surface of cubesat?
4
Is Geothermal Cooling on Venus Possible?

6
With what precision can we land an object on the moon, today?
3
How did the Apollo Moon rocks get away from NASA and into the public?
3
Moon craters. How deep do they get?
31
How could an object barely exceeding escape velocity from the Moon eventually reach the Earth?
2
How close to the moon would a flyby trip likely attempt?
13
Differences between vehicles used on the Moon and the ones used on Mars
3
Why does it get hotter in the thermosphere than on the moon?