What is the difference between Cape Canaveral SFS and Patrick SFB?

Cape Canaveral Space Force Station and Patrick Space Force Base are two facilities of the United States Space Force (both formerly assigned to the Air Force) on the east coast of Florida. They both seem to be part of the same command, the 45th Space Wing.

Best map that I could find, courtesy of the NY Times:

Related: What is the difference between Cape Canaveral and Kennedy Space Center?

In the United States, the United States Department of the Navy's General Order No. 135 issued in 1911 as a formal guide to naval terminology described a naval station as "any establishment for building, manufacturing, docking, repair, supply, or training under control of the Navy. It may also include several establishments". A naval base, by contrast, was "a point from which naval operations may be conducted".

From this, an educated guess would be that Cape Canaveral Space Force Station is auxiliary to headquarters at Patrick Space Force Base. Indeed, this is the case, but it is a bit of a messy history, to say the least.

Patrick SFB is the old Banana River Naval Air Station. Cape Canaveral SFS originates from the launch facilities used in the missile testing range that was developed in the Cape Canaveral geographic area and was an auxiliary base to when it got its first military designation together with Patrick (back then: Patrick Air Force Base).

The primary Cape Canaveral Space Force Station is to facilitate missile testing at the Eastern Range missile test range, while Patrick is more of a "general purpose" base and serves as headquarters. As such, CCSFS can still be considered auxiliary to Patrick SFB.

In the beginning, there was the Banana River Naval Air Station. There was nothing at the Cape area.

Cape Canaveral, better known as "the Cape," had been earmarked as a missile testing range in 1947.* [...] Cape Canaveral was a scenic but comparatively unsettled place.

With the footnote reading:

The history of the Cape becoming a rocket testing site can be found in "A history of Cape Canaveral" by Cliff Lethbridge. It is important to remember that Von Braun's team was an US Army team, while the US Air Force was also doing rocket development. The Army's and Air Force's ideas did not always align, with various conflicts of interest as a result. Also recall that next to the US Air Force branch, the US Army and Navy branches maintain their own air forces, leading to confusing things as "Army air forces" and "Navy air forces", which are not to be conflated.

In 1947 the US Army became responsible for the development of a missile test range. Shortly after (2 weeks!) the US Air Force branch was established and inherited the missile group from the US Army branch, but also the Banana River Naval Air Station.

Again later that year, it was decided that all branches (Army, Navy and Air Force) were supposed to benefit from the missile range, so it was to be a joint program.

There were multiple options for replacing White Sands as testing ground, including sites in California (rejected by the Mexican president) and northern Washington (rejected due to its remoteness). The Cape (with the Banana River station as headquarters) was thus chosen as site in 1948, helped by the British offering to lease land for tracking stations in the Bahama's.

Note that the missile range covers a large area, starting from the launch area extending many thousands of miles, as shown in this contemporary map: 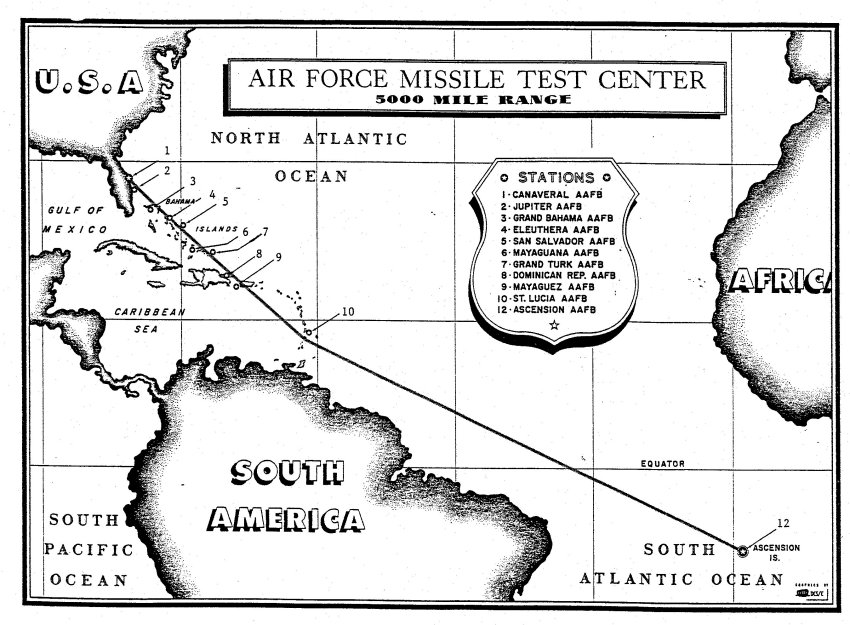 The launch area itself did not have a name until 1951, when it was designated Cape Canaveral Auxiliary Air Force Base. In 1955 this was renamed to Cape Canaveral Missile Test Annex.

By the end of the 1950s Cape Canaveral started to get crowded and when NASA's Saturn program started to take shape, they really needed more (bigger) launch complexes than the Cape could host. Many options were considered, but in the end Merrit Island was chosen. But:

(from History of Cape Canaveral)

NASA got their way, but had to leave (a lot of never used) space for future Air Force developments.

A full list of name changes can be found here.

For question 2: in between lives approximately 20,000 people according to the latest census data with millions of tourists annually. Both bases were around before the populations nearby grew big enough to inhibit joining the two, but I don't know why they weren't joined initially

Not the answer you're looking for? Browse other questions tagged military cape-canaveral facility space-force or ask your own question.

6
What is the highest inclination orbit ever attained from a Cape Canaveral launch?
8
Why was OSIRIS-REx almost destroyed because of a loss of pressure following the SpaceX "fast fire"?
3
What satellites were launched into a polar orbit from Cape Canaveral in the 1950s and 1960s?
45
What is the difference between Cape Canaveral and Kennedy Space Center?
7
How far is Cape Canaveral Air Force Station from Kennedy Space Center, administratively and programmatically-wise?
9
Why was Redstone Arsenal specifically chosen for post-war rocket development?
3
Why was the Cape Canaveral Skid Strip never used for a Space Shuttle's landing?
1
Are the waterways around Kennedy and Canaveral routinely dredged?
1
Have "space lasers" really been used to temporarily blind US satellites?