Has there ever been a completely solid fuelled orbital rocket? [duplicate]

Engines and fuel management are very expensive to develop, and for smaller launch providers and space agencies this could prevent them from entering the market. My question is, would the cost savings made on solid propellant, presumably at least, in both R+D and actual production outweigh the ISP cost? Is there a point where it becomes more cost-effective to switch to a more expensive but more efficient fuel as the required delta-v increases, and is this point greater or less than that required to reach orbit?

There have been a few purely solid-fuel orbital rockets over the years. The first was the Scout from 1961; the only ones in current use are the Long March 11 and the Minotaur/Minotaur-C family. There are more "nearly-pure" solid-fuel rockets such as the Shavit-2. These use three or more solid-fuel stages to get into an orbit, and then a liquid-fuel top stage to reach exactly the desired orbit.

The above hints at why these rockets aren't more common: they've got a number of drawbacks.

The SS-520 is a solid fuel rocket and is described in detail in my answer to Do launchers using only solid propellant exist? SS-520-5 has put the Tricom cubesat into orbit, therefore it also qualifies as a "completely solid fuelled orbital rocket".

The second attempt at becoming the smallest orbital launching rocket was made on 3 February 2018. Liftoff from Uchinoura Space Center occurred at the opening of a ten-minute window at 14:03 local time (05:03 UTC), successfully deploying the TRICOM-1R CubeSat.

I can't say how all-solid launchers compare cost-wise with liquid or mixed launchers, but they're viable.

The Minotaur I and Minotaur IV rockets are all-solid, four-stage orbital launchers.

The R&D and production costs for the Minotaurs were offset to some degree by the use of converted ICBMs.

The Vega rocket is a 4-stage orbital launcher with solid rocket motors on the first three stages. The upper stage is liquid-fueled, but that's mainly to allow precise control of the final orbit and provide roll control during ascent.

ISAS, now a part of JAXA, has a long history of using solid fuel to launch scientific satellites. Eight different vehicles, not including the SS-520.

Both launch vehicles were considered as experimental and never intended to have a long service life. Both the vehicles had 4 launches each. They were the first launch systems to be developed by India. It was easier for ISRO to experiment with solid launch systems as it had no experience and less funding.

After these two rockets ISRO switched to liquid fuel for increased efficiency. The curently operational PSLV ( Successor to ASLV ) has 2 solid and 2 liquid stages to increase performance and provide precise orbital insertions. 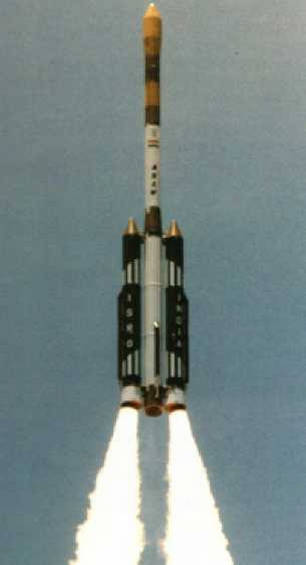 14
Do launchers using only solid propellant exist?
3
Why JAXA's tilted launch from a tilted rooftop?
6
If there "won't be" rockets to launch individual cubesats, then why did JAXA build exactly that? (SS-520-xx)
4
Will JAXA try again to launch TRICOM-1 with the "world's smallest orbital rocket" SS-520-4 again?
4
What exactly is rhumb-line control in the context of a launch trajectory?
3
Smallest orbital rockets by height?
4
How do small, spin stabilized launchers follow a rhumb line?
1
Which sounding rockets are the biggest?
2
Small satellite launcher to LEO dedicated launch vehicle
0
Lightest possible orbital rocket - being launched from high altitude
See more linked questions