How long would astronauts' footprints on Mars persist?

The Apollo astronauts' footsteps can remain theoretically forever on the Moon as it has no atmosphere. Mars does have an atmosphere but a very thin one. Its pressure ranges from 72 Pa (0.0104 psi) on the top of Olympus Mons to 1240 Pa (0.18 psi) in the Hellas Basin. Since this is quite a difference, I'm curious on both scenarios: how long would astronauts' footprints remain on Mars in case astronauts land on Olympus Mons, and in case they land in the Hellas Basin? Due to the low atmospheric pressures, the winds on Mars aren't by far as strong as on Earth.

Several months to years, but not forever.

We (obviously) don't yet have astronaut footprints to examine, but we do have rover tracks to look at.

Here is a perfect example: Opportunity's tracks around Victoria crater.

As we can clearly see, over the span of one Martian year the tracks have faded a lot, but are still crystal clear.

Similarly, here is a close-up of the Spirit Rover's tracks during the 2007 global dust storm. In just 22 sols of severe duststorm, the rover's tracks have been 90% erased. You can still make them out, but they are mostly filled in and smoothed over. 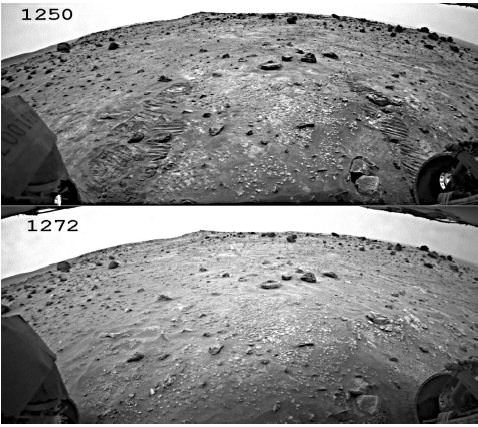 Note that this was during an exceptionally severe storm, the like of which only occur one a decade or so. Mars does tend to have a lesser global dust storm ever 3 or so martian year, but the usual fare is not as severe as the 2007, 2018 storms were.

So realistically, expect wheel- and footprints on Mars to last 10 to 50 times as long as on Earth, but they will fade away in calendar time, not geologic time as on the Moon.

It would not last very long, as Mars is notorious for the dust storms present despite the low pressure of the atmosphere which sometimes kick up enough dust to be seen by telescopes on Earth. so technically it won't last forever like on the moon.

As Sujay says, Mars is known for it's dust storms, therefore footprints wouldn't last long on the surface. The regional Martian dust storms tend to happen in the summers and the larger, planet wide, storms every few years.

However, while I cannot find anything categorically stating the dust storms don't reach the top of Olympus Mons. The vastly lower pressure (around 30Pa compared to around 1200Pa on Hellas Planitia) - https://planetary-science.org/mars-research/martian-atmosphere/ - makes me think that they likely don't; and even if they do, it would mean they carry vastly less material and therefore, footprints on the top of Olympus mons may be able to last an extremely long time.

Not the answer you're looking for? Browse other questions tagged mars atmosphere weather or ask your own question.

21
Brushing clean a Mars lander's solar panels
12
How are the Mars Rovers maintained?
16
Would the national flag planted by astronauts on Mars need an upper horizontal pole like the ones on the Moon?
20
Curiosity is still dirty! How will the ExoMARS Rover keep its solar panels dust-free and collecting sufficient power?
16
Are launch windows to Mars avoided if they result in landings during dust storm season?
12
Opportunity's last tau was 10.8; what does that mean and how is tau defined and measured?
5
Why are the gaps in MRO global images of mars so irregular and sometimes filled in?
8
Perseverance individual sample collection post-mission; what stops them from blowing away or getting covered and hidden by dust?

36
Would a settlement on Mars need to import Nitrogen?
7
Lightning on Mars?
10
If Mars had more atmosphere how warm would it be?
7
How long would a Falcon Heavy last in orbit around Mars before degrading?
7
How much does pressure on Mars change with weather?
13
Are there microclimates with better weather conditions on Mars?
5
How does InSight measure wind speed?
16
Would the national flag planted by astronauts on Mars need an upper horizontal pole like the ones on the Moon?