Where is the uncropped version of this cool Ingenuity navigation camera GIF?

Ingenuity's Shadow During Third Flight shows the GIF below which is made from cropped bits from several downward-looking images from Ingenuity's navigation camera, stretched so that the ground is fixed and the helicopter's shadow moves. It shows several interesting features.

The shadow of NASA’s Ingenuity Mars Helicopter can be seen in this animated GIF composed of images taken by its black-and-white navigation camera during the rotocraft’s third flight, on April 25, 2021. The camera, which tracks surface features below the helicopter, takes images at a rate at which the helicopter’s blades appear frozen in place, despite making 21 full rotations in-between each image. At full speed, the blades spin at 2,537 rpm. The images are aligned entirely using Ingenuity's on-board position tracking system highlighting the stability and accuracy of the navigation algorithm.

The GIF has been cropped to fill the frame, and the contrast has been increased so it’s easier to see; the frame rate has also been sped up. An uncropped version is included to show what the view from the camera normally looks like. An additional visualization shows how the star shape of the images in the original video is created by the fisheye lens on the navigation camera.

But I don't see said uncropped version anywhere. Does anyone know where/if it's been posted?

Question: Where is the uncropped version of this cool Ingenuity navigation camera GIF?

You can also see the shadow hiding/opposition surge effect around ingenuity's shadow. Cool!

All raw images from both Perseverance and Ingenuity are here: 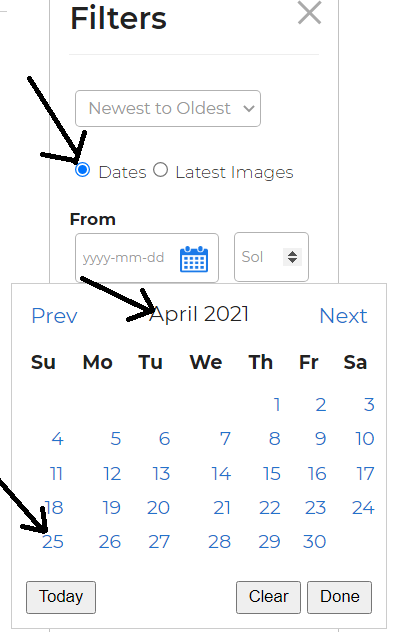 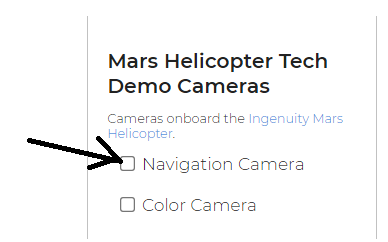 Not the answer you're looking for? Browse other questions tagged nasa photography reference-request ingenuity video or ask your own question.

8
Is there anything that could speak 900 MHz ZigBee that could hear Ingenuity helicopter besides the Perseverance rover?
4
Just how preferable are afternoons for flying Ingenuity? Why?

5
Has anything close to video ("live" or otherwise) been shot in space from beyond the Moon?
6
Did Apollo-11 astronauts rehearse their photoshoots on Earth?
2
Would Ingenuity's cameras be capable to spot and/or make close-ups of possible biosignatures?
13
How did Ingenuity get such a sharp image of the shadow of its own high-speed helicopter blades?
6
What is the exposure time of the navigation camera on Ingenuity?
7
At the end of the test campaign, could Ingenuity be programmed to fly fully autonomously to the planned sample cache depot location?
2
Could Ingenuity use the shadow of its legs for navigation to fly autonomously to the sample cache depot location?
9
Why shadows of the blades on Ingenuity navcam photos looks brighter than shadows of the legs?
4
Just how preferable are afternoons for flying Ingenuity? Why?