Is the life support system on ISS and other used manned spacecrafts fully redundant?

I just finished watching the Sci-Fi movie Stowaway where the crew of the spacecraft MTS-42 heading to Mars, gets in all kind of troubles after the failure of the single life support system. My question is whether the life support system is in reality completely redundant on the ISS or in previous manned spacecraft (or future ones for which the design has been finalized)? If not, what procedures are in place for dealing with the event of a life support system failure?

For shuttle, a previous manned spacecraft, the life support system was at least one-fault-tolerant for everything except structural failure of the pressure hull i.e. cabin leaks and fires. You can get an idea of the fault tolerance by looking at the go-no go criteria for Life Support. 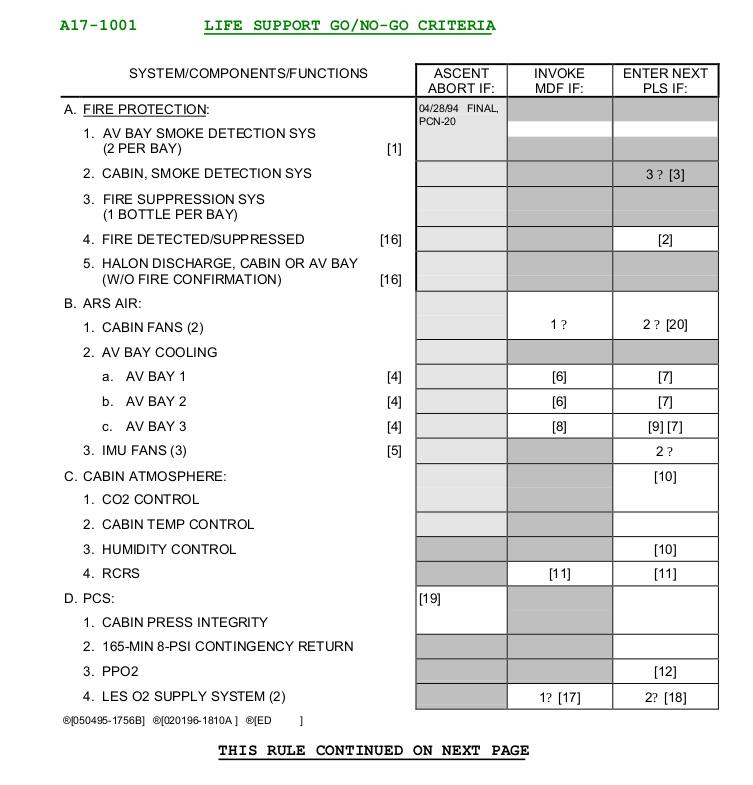 (INVOKE MDF means cut the flight short, ENTER NEXT PLS means land at the next opportunity to KSC or Edwards)

If not, what procedures are in place in the event of a life support system failure in order to keep crew alive?

Procedures were in place even for the redundant systems. Here are the procedures included in the ECLSS section of the shuttle Orbit Pocket Checklist (which listed failures requiring quick responses)

In addition to the above answer, you could look at the ISS as almost two separate space stations - the US orbital segment and Russian orbital segment. If the above covers similar ground to the US OS by way of similar technology and coming from the same agency, the other side is the Russian OS which also has its own life support system.

FGB (first module launched) and Zvezda are autonomous vehicles, that is, unlike the US modules, are (or were) able to be launched and operate under their own power and contain their own life support systems.

With life support, the ROS can simply close doors and keep its life support separate from the rest of the station, and the US orbital segment can do the same. You could view that as a back-up of sorts.

Each segment has its own way of recycling moisture and generating oxygen.

Power-wise, with the two OS linked, the ROS shares a bit of the power coming from the main array on the USOS; indeed in the early days of construction, the ROS was powering the USOS before the solar arrays arrived.

Orbital spacecraft are generally "single-fault tolerant": that is, there's no single failure that can cause an unsurvivable situation. This doesn't mean full redundancy, though: instead, there's often an alternate option that will acheive the end goal of keeping the astronauts alive. Some examples:

Partial redundancy is also common. For example, the Space Shuttle had three fuel cells, any two of which could provide sufficient power, and the Crew Dragon space capsule can land safely as long as three of the four main parachutes deploy.

Not the answer you're looking for? Browse other questions tagged iss spacecraft mission-design interplanetary or ask your own question.

32
What are the procedures aboard the ISS in the eventuality of a loss of a crew member?
12
What is the theoretical life of the ISS?
3
Buddy Secondary Life Support System (BSLSS) on American suits
15
How often has the ISS been physically vacant (un-manned)?
6
How do the booms on ISS (and other spacecraft) extend and retract?
4
How many people could the ISS support?
2
How to replace and refurbish the EMU suit used at the ISS?
3
Were there any spacecraft with nitrogen-oxygen atmosphere, but without a system for nitrogen replenishment?