How much debris will hit the ground from the Long March 5B compared to the debris from a GTO upper stage?

It was commented that there are currently 22 SpaceX upper stages in orbit that will eventually reenter in an uncontrolled fashion. PcMan pointed that out when I asked Why the Long March 5B wasn't deorbited intentionally, and it's a good point. If you add up all those stages, that's more mass than the 5B, I'd guess. I didn't check for the other GTO launch stages also in decaying orbits.

It's very difficult to predict what may survive reentry, but I found this on Mir (a controlled deorbit):

Mir's large mass, over 143 tons (including the docked Progress M1-5 spacecraft) [...] A sizable[sic] portion of Mir, perhaps 20 tons or more, is expected to survive reentry (emphasis mine).

from The Aerospace Corporation, it was linked in the Deorbit of Mir Wikipedia page, reference 13.

I think GTO stages don't necessarily enter with higher speeds because the drag is strongest at periapsis and thus lowers the apoapsis over repeated orbits until basically comparable to a low earth orbit reentry as seen in the LM-5 core stage:

And more dramatically in this other debris in a higher orbit: 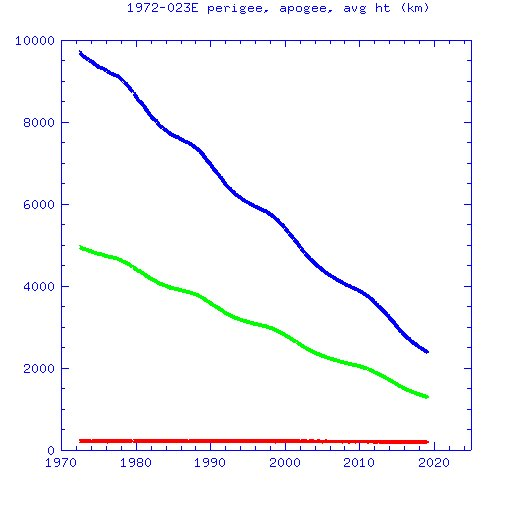 In like for like orbit conditions materials definitely play a big role. Composite Overwrapped pressurant tanks are understood to be more likely to survive.

Looking at the LM 5B vs Falcon 9 upper stage and using this line of reasoning obviously depends on what such composite over-wraps are used for, e.g. if the main fuel/ox tanks are self-pressurising then there is less reason to assume that the 5B would have bigger/more tanks.

If the composites aren't the main issue I presume the next big/dense items would be the engine turbines.

4
Why couldn't China's space agency do a controlled deorbit burn for the Long March 5B?

21
Any possible setbacks in deorbiting larger space junk and let it burn up upon reentry into atmosphere?
13
Does it snow in LEO?
8
How can the same upper stage be optimal on a common core booster as well as on a single booster?
4
How long does the upper stage stay in orbit if the payload is released on GTO?
9
What is typical lifetime of GTO rocket stages before reentry?
2
Impact of Constellations on Space Debris and Launch Windows
1
What Earth satellite remained in orbit the longest before reentering?
11
Does the debris from the re-entry of Long March core stage ever reach the surface?