Say you switch from your current guidance program to a brand new program that commands your spacecraft to a different attitude. Assume the new attitude is a discontinuous step change from your previous commanded attitude.

If the step change is large, it will trigger large corrections from your attitude controllers, which will cause the spacecraft to rush to the new commanded attitude, and quite possibly overshoot it, while also subjecting it to large loads you'd rather avoid.

So clearly step changes in attitude commands from guidance are a problem to be avoided.

I would love to know this. I've been avoiding the problem by ramping between old and new attitude errors (using a linear equation of the type y = ax + b), and this avoids the large problematic corrections that my controllers shouldn't be issuing (as my spacecraft goes out of control), but it eats at me that I haven't seen this done in any of the space shuttle papers I've read on GNC---and I'm convinced this is not the way to solve this.

So how do spacecraft handle sudden transitions between attitude commands when the changes are large? Please help me avoid nonsense in my model.

A naive bang-bang approach can consume excessive amounts of propellant when the vehicle needs to achieve large changes in attitude. The rotation rate can get excessively large at the switchover point. The solution is simple: Don't do that. There's typically no reason to make (for example) a 180° rotation in the minimum amount of time required.

Many vehicles place an upper limit on the vehicle's rotational rate and employ what is essentially a burn-coast-burn strategy to achieve large changes in attitude. Many vehicle's attitude control systems also limit percent on-time to something less than 100% as saturation (100% on-time) is a key indicator that the vehicle has lost controllability. 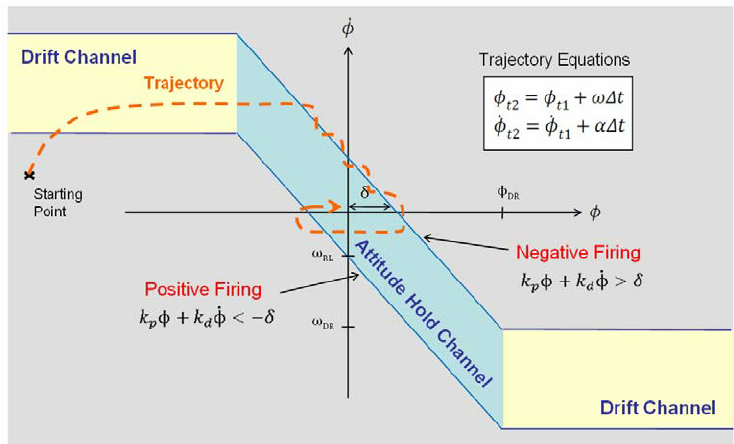 3
State of the art of satellite Attitude Determination and Control Systems
15
How do Voyager 1's Trajectory Control Thrusters differ from its Attitude Control Thrusters?
36
How did the X-15 control attitude above the Kármán line?
3
How many times would two astronauts have to run around Skylab to turn it by 10 arc minutes?
2
Satellite mission design/performance requirements to attitude/orbit control design specifications
10
How hard was it for the Shuttle to perform attitude control for the entire ISS? Did they have to calibrate?
3
Confusion with Apollo CSM attitude maneuvers (roll, pitch and yaw) during coasting to/from the Moon
9
Rocket launch: closed vs. open loop?
3
Attitude control of rockets with RD-107 engines