Besides health benefits, what are the advantages of including inertial gravity sections on spaceships?

Obviously, the benefits of building ring sections on spacecraft are pretty large when you factor in the detrimental effects prolonged stays in zero gravity environments (not accounting for radiation exposure) have on the human body. They also contribute to mechanical complexity and can exert greater mechanical stressors to other parts of a spacecraft under acceleration and deceleration, which would increase the cost of spacecraft designs which include them.

What other benefits are conferred by having an environment wherein crewmembers can operate under gravity? Some I have considered include:

The presence of gravity simplifies a number of common processes. Some examples:

It would help you to learn which plants can grow properly in a greenhouse on the moon or Mars. When a seed germinates, the root starts growing downward with gravity, and the shoot grows upward to the surface of the soil.

Light also helps to orient the plant, but it only works once the shoot has breached the surface of the soil. The angle of sunlight is affected by latitude, seasons, and time of day (as it does here on Earth), so the direction of sunlight is not always straight "up". Plants have therefore evolved a balance between gravity and light clues to point them in the best direction for growth. The gravity of the moon or Mars might not be enough for some plant species to grow properly.

With a centrifuge module on a space station, you could simulate the gravitational and light conditions of the moon or Mars, to see which plants grow best. The centrifuge does not need to be large enough for a person; just big enough to conduct an experiment.

Having a facility to investigate the effect of variable gravity levels would be very interesting from a scientific perspective.

Some of the questions that might be worth finding the answers to are: How do various plants and bacteria respond to different gravity fields? How does this effect how they grow and the crop yields for plants?

How does Lunar or Martian gravity effect mammalian reproduction using mice? If mice can't produce viable offspring or have off spring with serious problems under Martian gravity the whole concept of colonising Mars is moot.

I'd assume you could essentially use it as a very large reaction wheel, so use it for station keeping/ fine control of attitude

While @DrSheldon's answer points out that a reduced gravity simulator...

...would help you to learn which plants can grow properly in a greenhouse on the moon or Mars.

A access to a long-term reduced artificial gravity field will also yield information on how people might fare on Mars. There is a lot of data on rates of bone loss and deterioration of eyes in microgravity, talk of colonization of Mars makes us wonder about the health effects of living on Mars or even How would travel to Mars without artificial gravity affect a crew's initial experience in Mars gravity?

Experiments exposing astronauts to Mars level of gravity (0.36 of that on Earth) for six months could be compared to ISS data, and let us know if the health effects are two thirds as bad as microgravity, worse, or better.

Hackaday's ISS Artificial Gravity Study Shows Promise for Long Duration Spaceflight links to Off-World Cement Tested for the First Time which explains that there are both advantages and disadvantages to curing concrete in reduced or zero gravity.

Advantages are less or no settling of the aggregate (those bits of rocks, sand, other stuff) to the bottom. Disadvantages are no rising of trapped air bubbles to the top, leaving voids.

Testing these things in a Mars gravity field may be helpful for finding the right mix for Martian concrete, should any be necessary.

For the first time, tricalcium silicate (C3S) and an aqueous solution were mixed and allowed to hydrate in the microgravity environment aboard the International Space Station (ISS). The research hypothesis states that minimizing gravity-driven transport phenomena, such as buoyancy, sedimentation, and thermosolutal convection ensures diffusion-controlled crystal growth and, consequently, lead to unique microstructures. Results from SEM micrographs, image analysis, mercury intrusion porosimetry, thermogravimetry, and x-ray diffraction revealed that the primary differences in μg hydrated C3S paste are increased porosity and a lower aspect ratio of portlandite crystals, likely due to a more uniform phase distribution. Relevant observations led by the presence or absence of gravity, including bleeding effect, density, and crystallography are also presented and discussed. 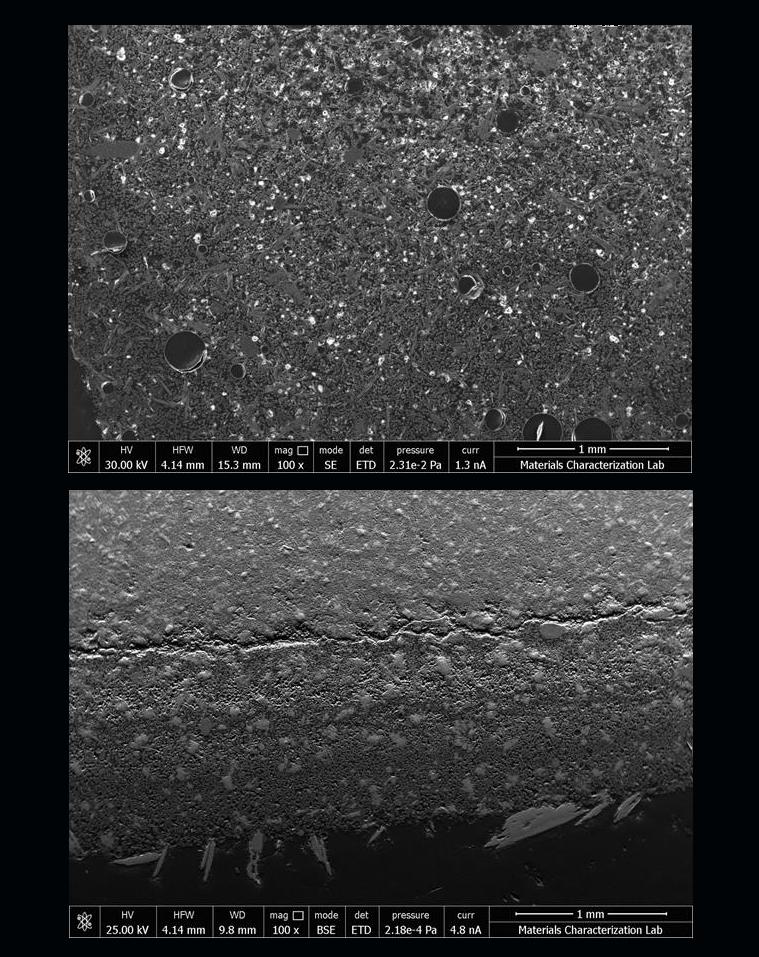 These images compare cement pastes mixed in space (above) and on the ground (below). The sample from space shows more porosity, or open spaces in the material, which affects concrete strength. Crystals in the Earth sample also are more segregated. Credits: Penn State Materials Characterization Lab

Not the answer you're looking for? Browse other questions tagged health artificial-gravity or ask your own question.

1
How would travel to Mars without artificial gravity affect a crew's initial experience in Mars gravity?

17
Would wearing heavy clothing be enough to solve the health effects of reduced gravity on other planets?
9
What are the health risks facing humans on long-term space flights?
36
What would the size and rotation of a station need to be to produce 1g gravity from head to toe?
12
What are the consequences if an astronaut's helmet gets damaged during a spacewalk?
8
Folding structures in space - What are the potential benefits and problems?
5
What is the gravity inside a rotating cylinder?
2
Are large spin gravity spaceships practical considering strength of materials
6
Are there active proposals for the next large space station (post-ISS) to use artificial gravity?
0
What are the main impacts on the body of an astronaut exposed to long term zero gravity?