What could Perseverance listening to Ingenuity reveal?

On 2021 May 7, the science lead for Perseverance's SuperCam Mars microphone said about that microphone's recording of a flight of the Ingenuity helicopter:

We had carried out tests and simulations that told us the microphone would barely pick up the sounds of the helicopter ... This recording will be a gold mine for our understanding of the Martian atmosphere.

What could this recording teach us about that atmosphere, really?

Could listening to a distant known sound source reveal anything other than a better characterization of that sound source? (Rotor noise is pretty complicated, after all.) Maybe how the sound varies with distance can reveal something about the vertical wind speed gradient. But that's still hardly a "gold mine."

Though thinner than Earth's the sound of Ingenuity's rotors recorded by Perseverance's microphone(s) passes through roughly a hundred meters of Martian air.

I assume without proof that JPL being JPL the microphones will have been carefully calibrated on the ground under various pressures and temperatures for absolute response (amplitude and phase shift) and directionality installed on the rover, and probably some attempt was made to simulate the effect of ground reflections ("multipathing"). But I could be wrong.

Theoretically the attenuation of the sound level with distance might be useful, but the microphones are directional (the one on ChemCam especially) so it's doubtful that when including ground reflections anything can be obtained from absolute sound levels.

The speed of sound will be

where $K_s$ is the isentropic bulk modulus and $\rho$ is the mass density, both of those will depend on temperature (which changes a lot with time and local position) and composition (which changes but less).

The Doppler shift is

where $f_0$ is the true frequency of the rotor sound, $f$ is the frequency heard at the microphone, and $v$ is the rate of change of distance (thus the minus sign).

Getting the absolute rotor frequency to a part per thousand or better from off-line analysis of telemetry is probably possible; the two rotor motors are actively synchronized (phased locked) to each other and probably feedback loops keep them close to a fixed frequency from an internal timebase I'll look that up after finishing the first draft of this post, update: I couldn't find anything so far: Wikipedia' Ingenuity (helicopter) links to Mars Helicopter Technology Demonstrator (Canham et al. 2018, AIAA Atmospheric Flight Mechanics Conference, also here and archived)

The two synchronized rotors try to maintain +/- 2,537 rpm and have two tips per rotor, so we can expect about 84.6 Hz with a wavelength of about 2.8 meters.

The ground velocity can be gotten from analysis of the ground tracking camera from position vs time and the component in the direction of Perseverance taken since the JPL folks know where everything is.

Therefore, Doppler shift could be an indirect/independent way to measure or verify $\sqrt{K_s / \rho}$, though I don't know if that's necessary in 2021, it might help.

The problem though is that the velocity in the doppler shift must also include wind! So Doppler might also help to verify Perseverance's anemometer.

It is important to note that MEDA measures several things, including temperature at different heights and windspeed. I think it is likely that JPL folks will squeeze what they can get from Doppler from Ingenuity's rotors, but I can't say how much it will contribute to verifying, corroborating or (possibly thought not likely) calibrating MEDA's observations. 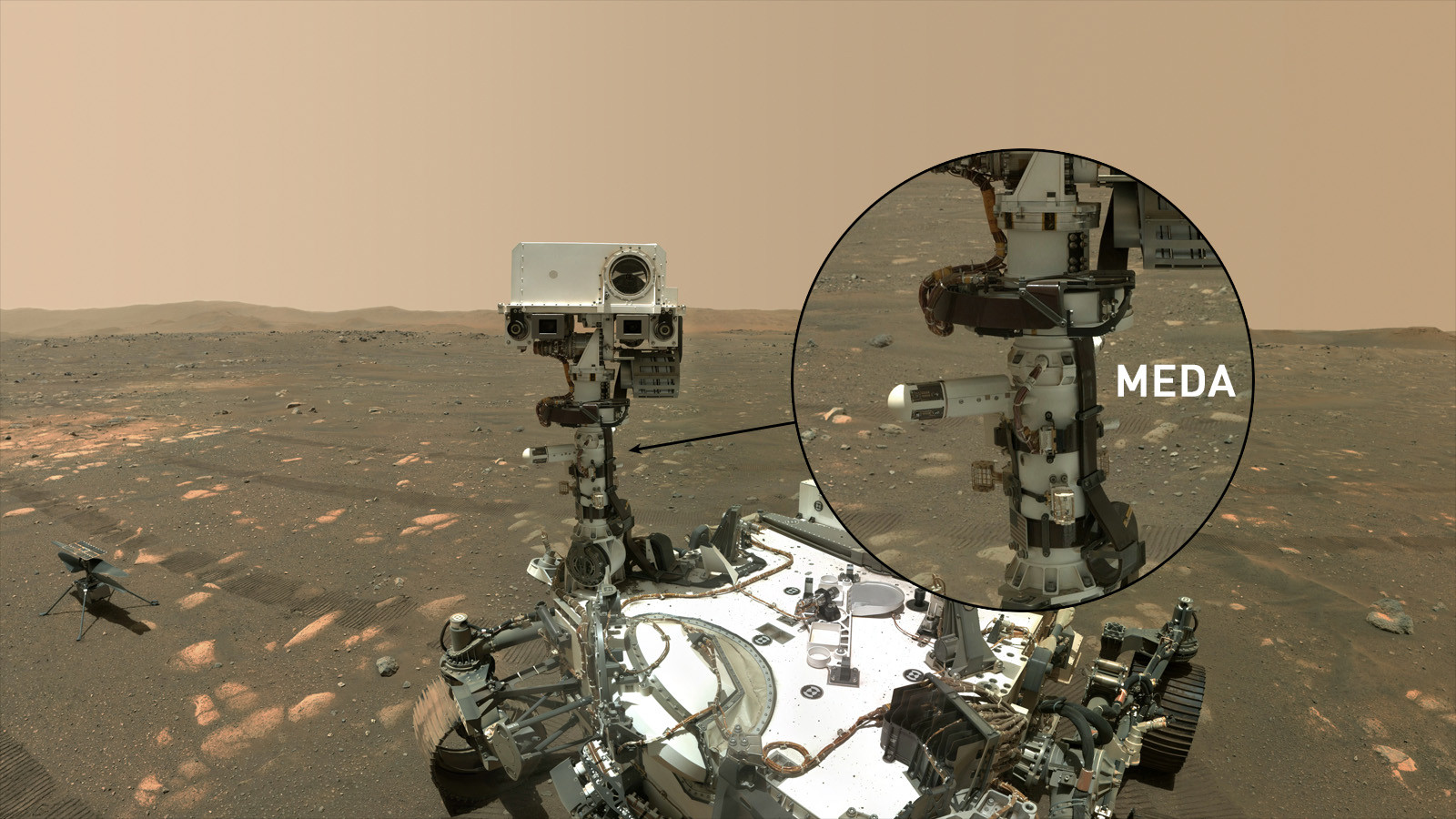 From Extremely hot weather on Mars

Saturday, April 10, 2021 at 10:54 AM – The first weather report of Perseverance from Xero Crater reveals awe-inspiring weather with extreme temperatures.

From Analyzing the Performance of a Miniature 3D Wind Sensor for Mars:

The characterization of surface weather in Mars has been and continues to be one of the main science objectives in many Mars missions. As an example, Goal D3 of the Mars 2020 mission (Perseverance rover) is: “Surface weather measurements to validate global atmospheric models”. In the 2020 version of the report “Mars Science Goals, Objectives, and Priorities”, prepared by the Mars Exploration Program Analysis Group, [1], it is mentioned, in Goal II, Sub-Objective A1, that: “Obtaining a high-quality dataset from a properly accommodated surface-based weather station (i.e., one in which thermal and mechanical contamination from the spacecraft is minimized beyond what has been done previously) is still of highest priority”. The main reason for obtaining high quality surface weather measurements is to provide “vital ground-truth validation for complementary measurements retrieved from orbit and essential data for designing and validating climate and weather model parameterizations”.

Not the answer you're looking for? Browse other questions tagged mars atmosphere perseverance ingenuity or ask your own question.

21
Has sound ever been used to diagnose a problem not shown by other measurements?
5
How does InSight measure wind speed?

9
How long could the Mars helicopter Ingenuity keep up with the Perseverance rover if it wanted to?
4
Are there any illustrations/animations which show how Ingenuity is stored on Perseverance & how it is perpared for launch?
6
What is the exposure time of the navigation camera on Ingenuity?
2
Could Ingenuity use the shadow of its legs for navigation to fly autonomously to the sample cache depot location?
3
How Ingenuity ensures it does not fly away from the range of connection from Perseverance?
3
Which is currently further from their landing site: Ingenuity or Perseverance? How far away are they from each now?
7
Mars helicopter ingenuity stress testing at end of mission?
4
Just how preferable are afternoons for flying Ingenuity? Why?