What is this long truss associated with Mir?

35 years ago, on February 20, 1986, the first module of the Mir orbital complex was launched into near-earth orbit. The first expedition arrived at the station on the Soyuz T-15 manned spacecraft (cosmonauts Leonid Kizim and Vladimir Soloviev) and worked in space from March 13 to July 16, 1986. This was the first long-term expedition to the Mir space station and at the same time the last flight to the seventh Salyut.

There is a slide show with 11 photos and the one below is the 6th. It appears to show a long reinforced truss with a square cross-section and perhaps up to 20 roughly cubic segments. There is what looks like the circular limb of the Earth in the background.

Question: What is this long truss (that I believe is) associated with Mir? What are it's dimensions and what's its purpose? 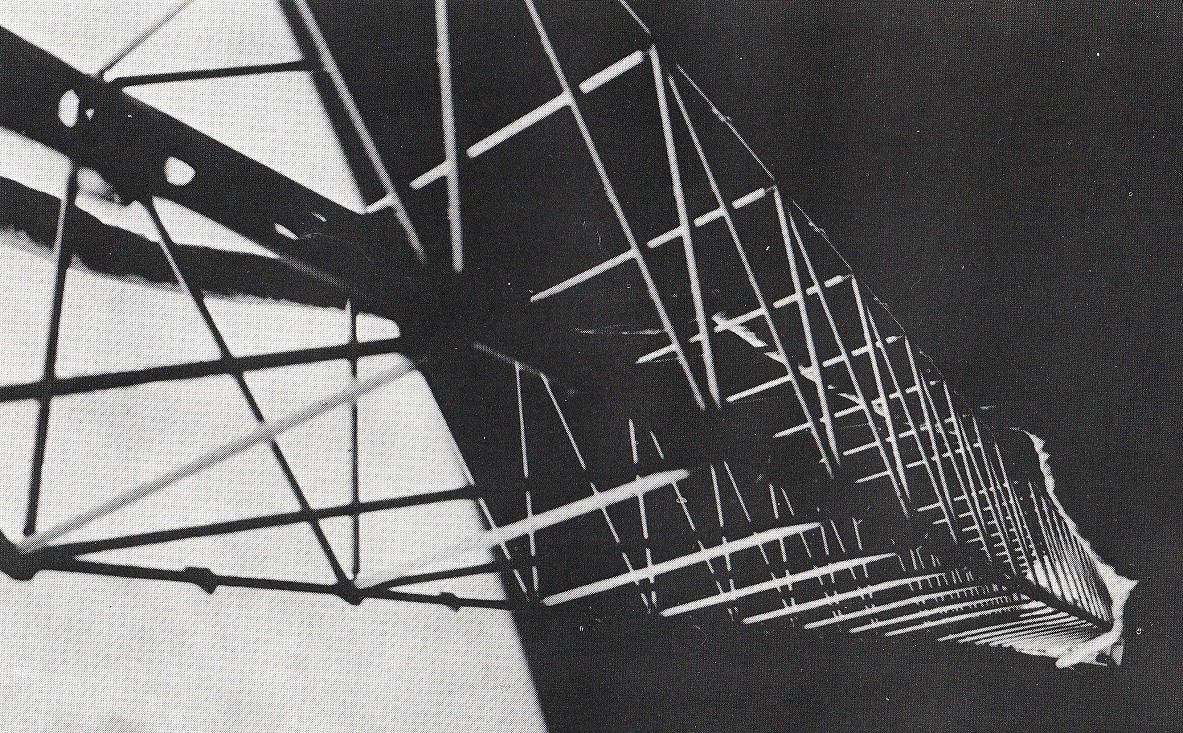 Additional element, including interview with cosmonaut Vladimir Solovyov, added at end of this answer - the truss went up twice on Salyut 7 before being disposed of. Soviet color photograph added.

(It is not the Sofora Arm, but the predecessor to it)

From EVA's carried out from May 28 1986 to May 31 1986, Cosmonauts Leonid Kizim and Vladimir Soloviyov installed the URS (also known as Mayak, meaning both lighthouse and beacon) truss on the front compartment of the station, after removing previous experiments. 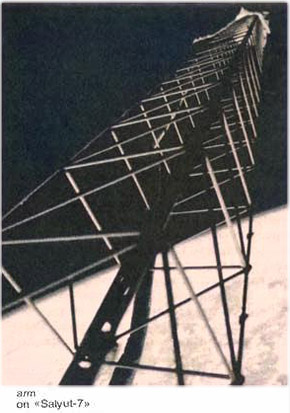 It is described here:

The cosmonauts then attached the cylindrical 150kg URS space assembly device to the hull outside the airlock hatch. The URS device deployed a 20kg, 12-to-15-m tubular metal truss held together by hinges and springs. URS was designed and built by the Paton Institute of Electric Welding in Kiev.

The assembly unit was a rather large 150-kilogram cylindrical container, where a sliding hinge-lattice structure made of aluminium and titanium was laid. It could be pulled out of the "barrel" manually, in a semi-automatic mode and completely without human intervention using an electric motor. A small orange beacon glowed on top of it

A displacement sensor was mounted to record vibrations

Its upper end swayed noticeably. However, this did not frighten the commander, who decided to subject the mast to an unplanned test. Turning his hands over the steps of the staircase directed into space, swaying his whole body, Kizim slowly climbed higher and higher.

After this the experiment was considered over and the truss was disassembled.

This probably accounts for the scarcity of photos and descriptions. 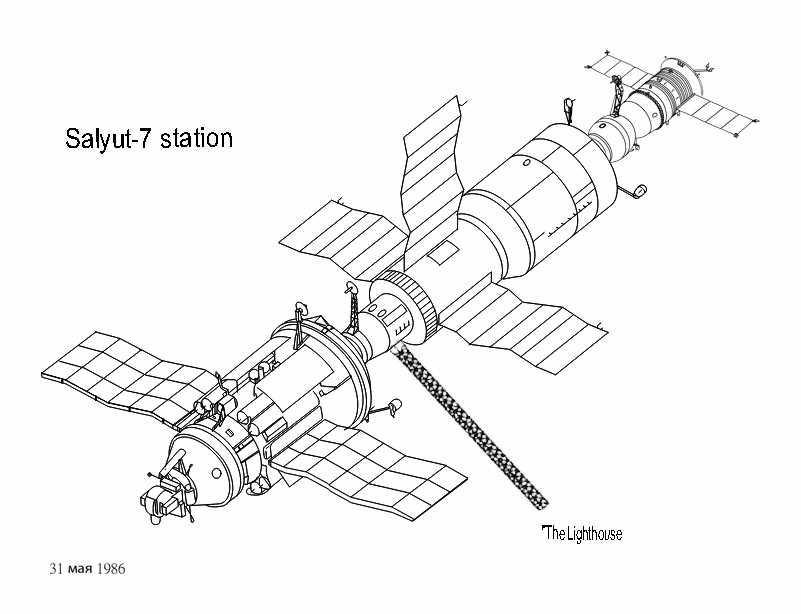 As you can see, the installation position accounts for the limb position in the currently only known photograph of the truss. 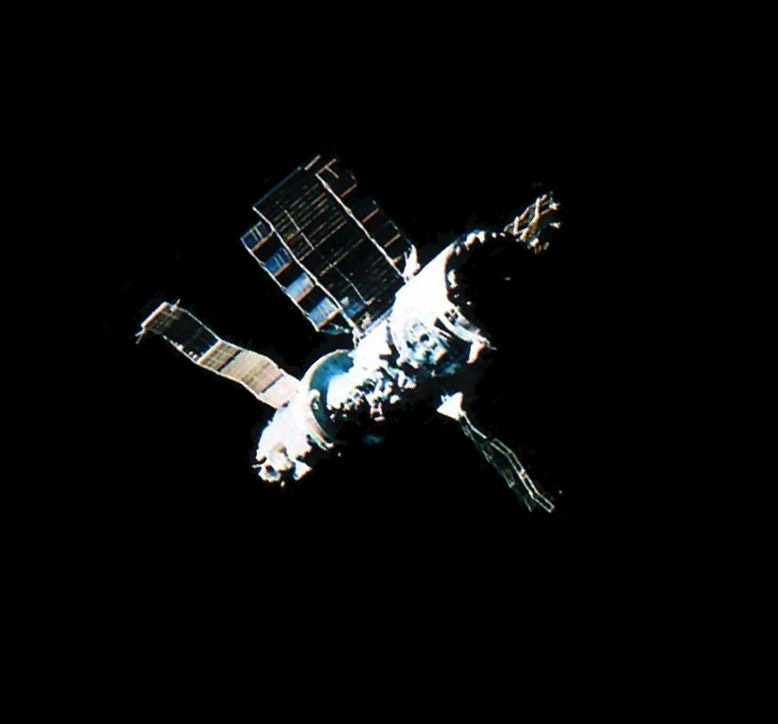 That aside, the physical description shows the ancestry of the two trusses that ended up on Mir.

Incidentally, this also describes the second time ever that welding was carried out in space, using the same hand held URI device that Svetlana Savitskaya used for the first time in 1984 (First female EVA and first welding in space, outside a spacecraft).

The description for it is that it is made of titanium nickel - each section 500 x 500 mm, each horizontal section is flat welded with holes for each of the Y sections to go through. I think the truss overall was about 21 sections, made up from a flat pack of 80 pieces.

You can also see the flat corner sections, and the cable that snakes its way down the truss. 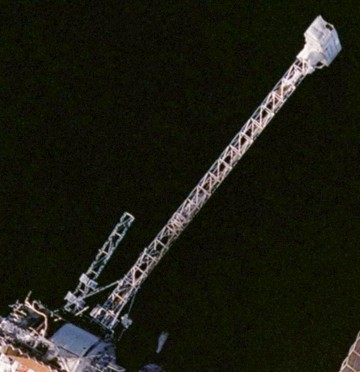 It is not the left truss as this is the Rapana arm added in 1993, which is much shorter, and being a test for construction for Mir-2, it is a series of hinged boxes that open out, made of carbon fiber. 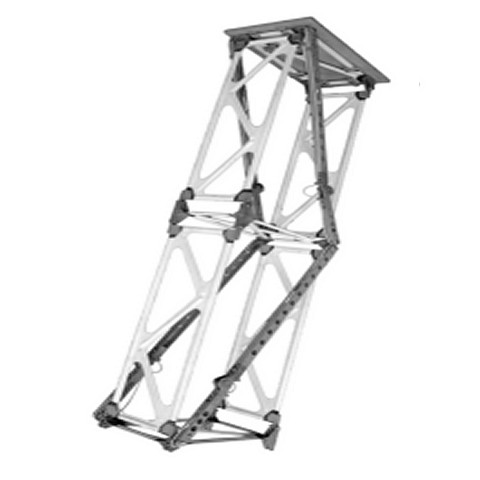 Its construction is entirely different from the Sofora arm.

With reference to the @GordonD answer and @OrganicMarble comment, with the Mir photo, taken in 1998:

The truss seen to the right, is not a truss at all, it is just a funny angle of the solar panel mounted on top of Mir.

Either side of that are the Strella cranes. 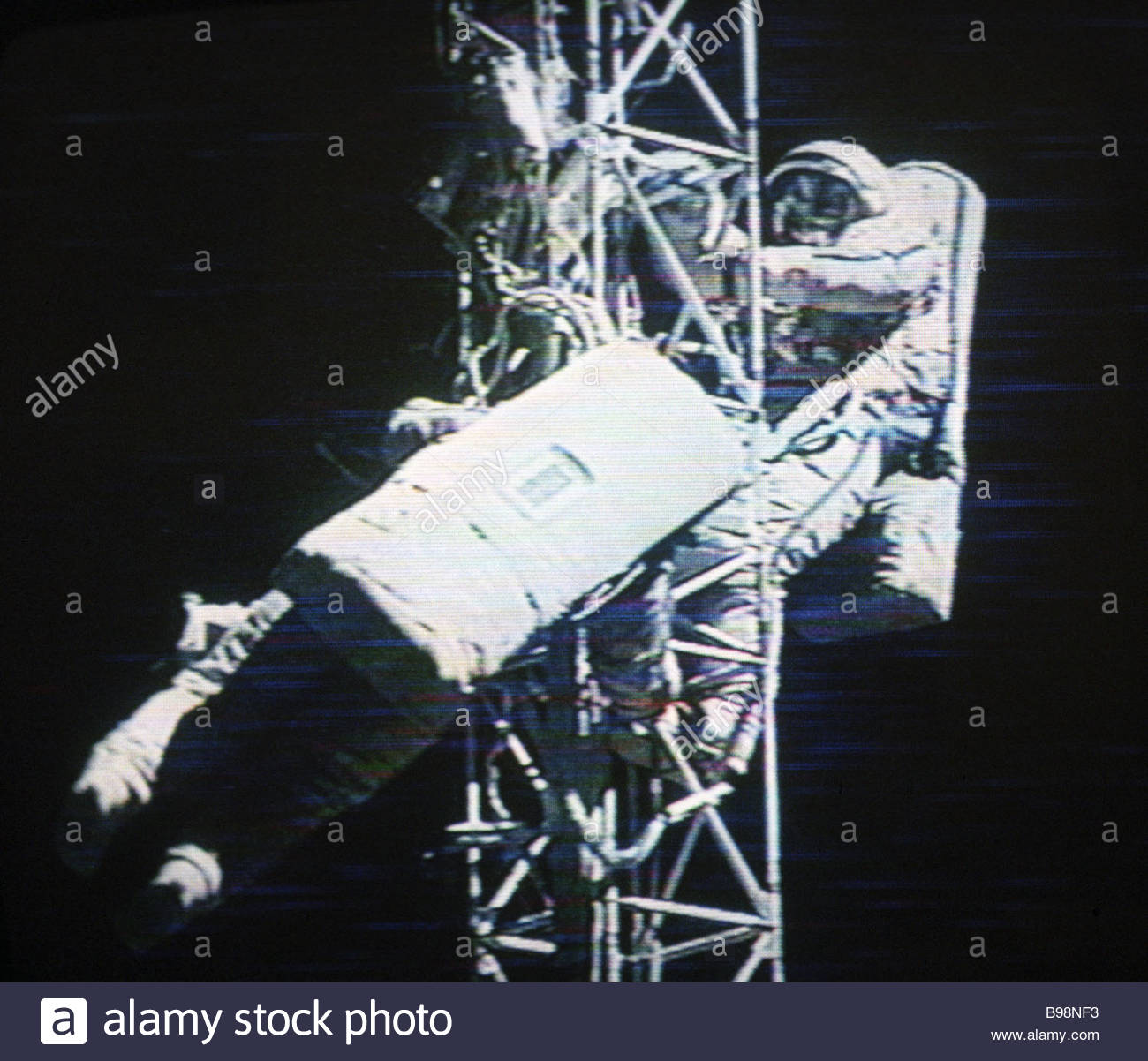 Laborious construction of the Sofora arm by cosmonauts from flatpacks.

and finally, a really good closer photo of the two truss assemblies. 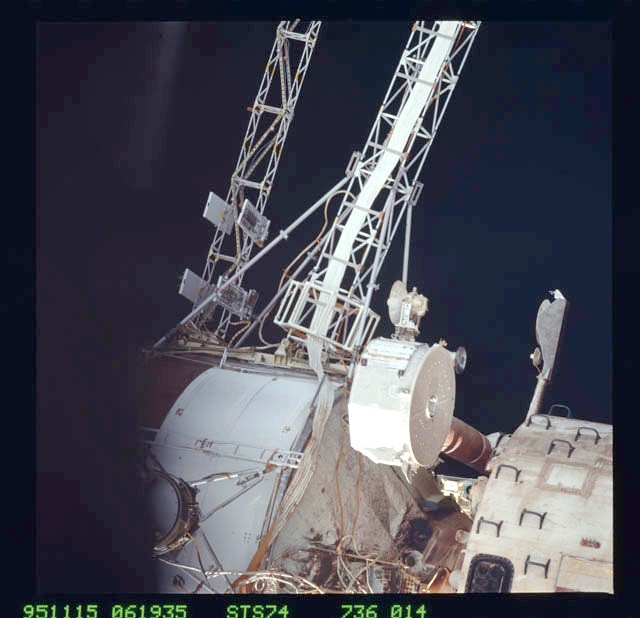 Additional, referring to the Lighthouse erected on Salyut 7: 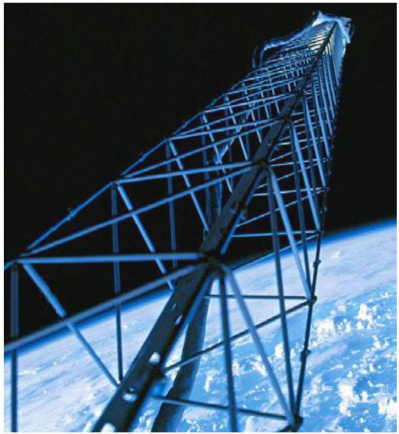 Extract from anniversary edition, A.Ilyin and V. Lyndin specifically for the "Cosmonautics News", 2011:

On May 28, at 0843, Cosmonauts Leonid Kizim and Vladimir Solovyov opened the hatch of the Salyut 7 space station and went to the outer surface.

First, cassettes with samples of biopolymers and various structural materials were removed, as well as Soviet-French equipment for collecting micrometeorites. All this equipment has been in storage since August 2, 1985, since the time of Janibekov and Savins spacewalk.

Then the astronauts conducted an experiment called "The Lighthouse".

They installed a mounting platform on the transition compartment of the station and mounted a block on it, which included a lattice truss and a device for its unfolding and folding (URS).

When folded, this block outwardly represented a cylinder about a meter high and weighing 150 kg. The experiment was supposed to check the operability of the URS (For the future construction of Mir-2 space station).

"It's interesting, but the name of the experiment coincidentally coincided with our call sign, Beacon/Lighthouse.

URS had two drives - manual and electric with remote control. At first, we tried to develop the truss with the help of an electric drive. Tried and tried - it does not work.

There, in space, there is a problem of cold welding of metals in vacuum.

Therefore, in the Lighthouse experiment, the automatic unfolding system did not work.

I climbed higher above the Kurs antenna, secured myself and manually began to move the bed along the section"

The cosmonauts deployed the truss and, with the help of a TV camera, showed its slender open work structure, clearly standing out against the black background of space.

After that the truss was returned to its original state and it is again moved into the (forward) transition compartment.

After further work, Leonid Kizim and Vladimir Solovyov had worked in outer space for 3 hours and 40 minutes.

On May 31, at 0757 the crew again opened the exit hatch of the station, and then transferred the necessary equipment, instruments and tools to the work area.

Held three days ago, the dress rehearsal significantly accelerated the installation and fastening of the URS unit on the outer surface of the station.

As during the last spacewalk, the astronauts had to open the lattice truss again. But if then the platform at the top of the truss was empty, now there were devices on it.

One of them - the atmosphere density meter 'Background' - was developed at the Leningrad Polytechnic Institute.

The sensors of the atmosphere surrounding the orbital complex were already working in orbit, but accurate quantitative measurements had not yet been carried out.

Due to its high sensitivity, the 'Background' device not only examined the particles of the station's own atmosphere, but was also able to distinguish among them alien particles that flew here from the upper layers of the Earth's atmosphere.

The creators of the space truss mast - specialists of the Kiev Institute of Electrical Welding - set themselves two tasks:

That's why, when the truss stood up in full his height, Vladimir Solovyov exclaimed:

"This is a beauty! This is really a "brick" for the construction of large structures in the future."

To study the vibrations of an extended truss structure, the Lighthouse experiment was conducted:

A small orange was installed at the top of the truss mast - there was a flashlight, and a TV camera fixed at its foot allowed to observe the movements of this lighthouse.

In this way, rough vibrations of several centimetres were detected, and accurate measurements of the rigid characteristics of the structure were carried out using a seismic receiver developed at the All-Union Research Institute of Geophysics.

At the same time, data on the fluctuations of the base of the truss and the cargo area were transmitted to Earth, which made it possible to create a mathematical model - the basis for developing the structures of future extra-terrestrial structures.

In order to tighten the experiment conditions, Leonid Kizim climbed the truss almost to the middle of its length. The open work mast withstood this test.

"She's not that frail. If you weld the joints, you can deploy solar panels and other structures in the cosmos for at least kilometers."

The next stage of the work of the crew in outer space was the soldering and welding of typical elements of the truss structure.

These operations were performed using a portable electron beam device, first tested by Svetlana Savitskaya and Vladimir Dzhanibekov on Salyut 7 in 1984. Kizim and Solovyov created rigid all-in-one joints from specific nodes similar to those of which the hinged-lattice truss consisted.

"And then we discarded the truss. Then they did not think, as now, where to go: they just pushed up - and it flew.

I remember we trained on the Ground - with weightlessness hoists. We flew a lot, the whole summer.

One of the training sessions was devoted to the disposal of this truss. As always, there were doubts: Can it be discarded or not?

And so I went to bed in a spacesuit on the plane on the floor, and a simulator of a container with a truss was tied above me.

The weightlessness lasted only half a minute, and during this time it was necessary to open the container - it slid along the rail itself.

Then the container returned to me, and at that moment not only the weightlessness ended, but there was an overload.

It was very uncomfortable when this 150-kilogram thing was hanging over me!" 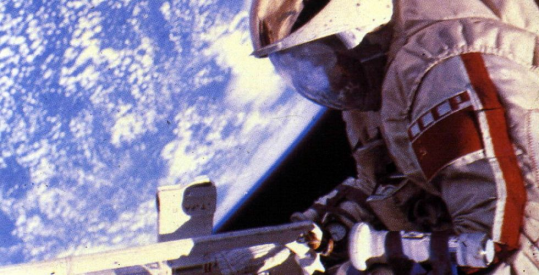 Also of note, they had honey waiting for them aboard the TKS space station module Kosmos 1686, and also found the secret stash of cognac on Mir...

I believe that's the Sofora girder which was made up of 20 segments totalling 14 metres in length. There was an RCS thruster at the top end which made it easier to orient the station and used less propellant. It was assembled by Anatoli Artsebarsky and Sergei Krikalev during four EVAs in July 1991 and the thruster pack installed by Sergei Avdeyev and Anatoli Solovyov in September 1992. Here's a photo of Mir taken from STS-89 showing the truss with the RCS unit at the top and a manipulator crane to the left. 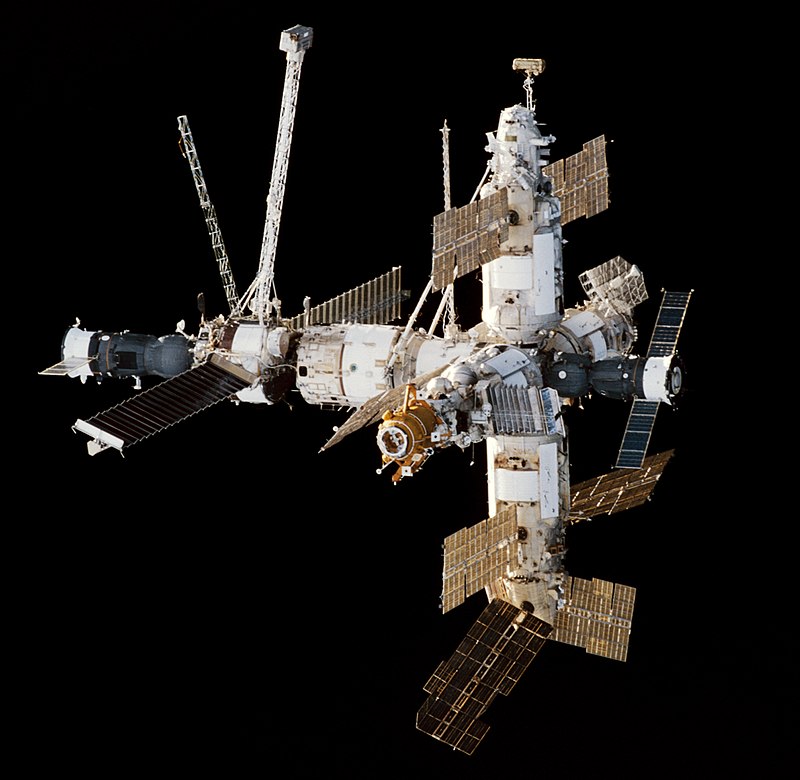 24
Have things been intentionally welded in space? If so, what kinds of metals and techniques were used, and why was it necessary?

15
What was being manufactured on Salyut and Mir?
6
Where did Soyuz and Progress dock with Mir?
15
How did the Mir crew recover from the power outage following collision with Progress 34?
3
What spacecraft part is Mike Pence touching in this photo?
0
What is this long black tube snaking up to the capsule payload of the Antares rocket?
2
What mission is this Chris Hadfield photo associated with and what is the location? And what is that thing?
4
Was the teletype machine on MIR the first printer in space? Is there a photo, and what frequencies were used?
7
What is this thing on the right of the frame in this photograph? (STS-71)