"Re-entry" vs "Reaction" in RCS

Reading through the Wikipedia (not known for being the bastion of all truth but usually a decent starting point) article for Gemini 8, I came across this passage (emphasis mine):

The astronauts realized that the problem was on the Gemini. By now the tumble rate had reached 296 degrees per second and Armstrong decided to shut down the OAMS and use the Reentry Control System (RCS) thrusters, located on the Gemini's nose, to stop the tumble.

I have only every heard RCS be used to mean "Reaction Control System", and so I assumed it was a mistake, but then I saw this image: 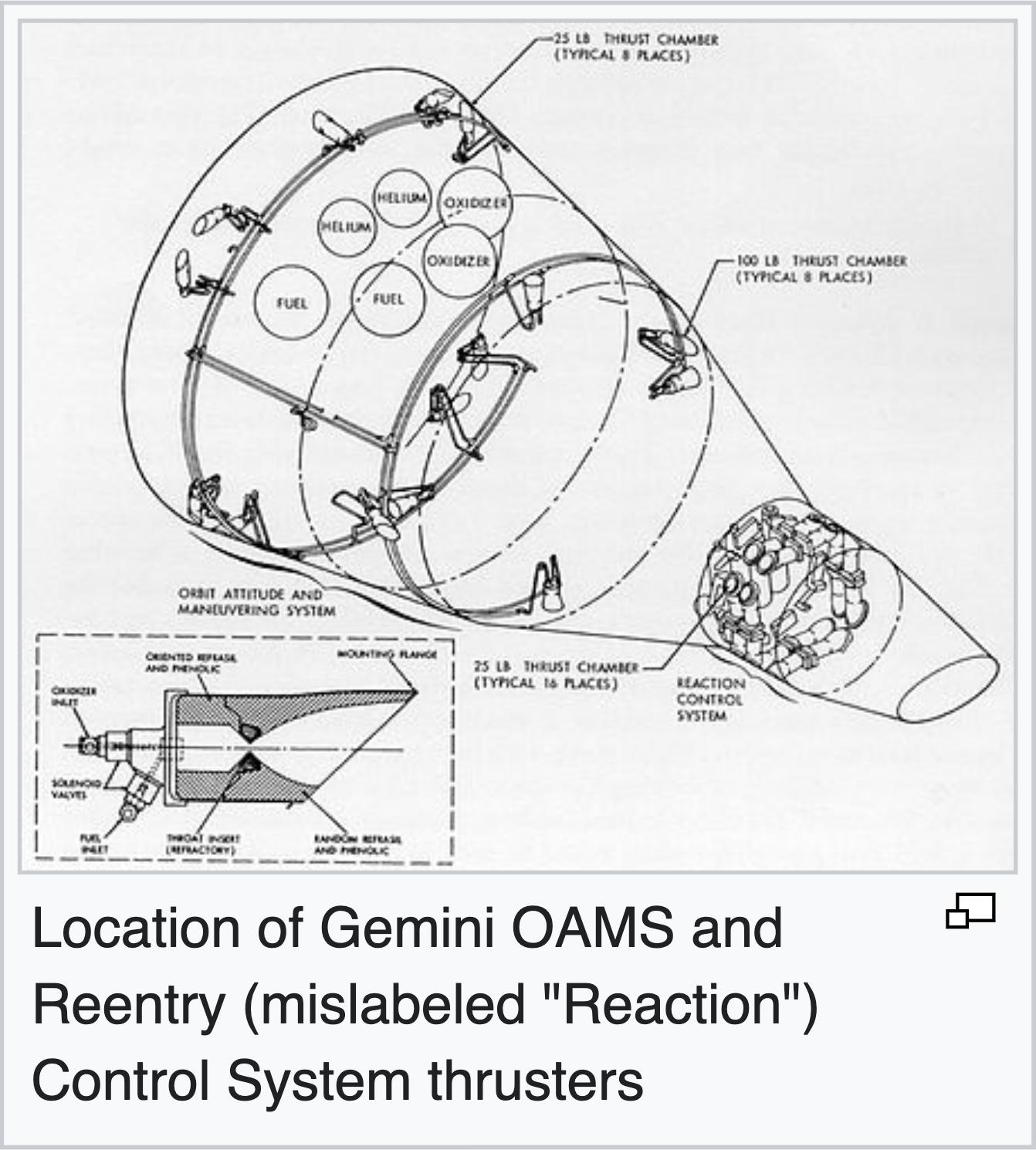 In which they double down on this. I then went looking for evidence of this, and found an article on the Smithsonian website which also refers to them as "Reentry Control System Thrusters".

It appears then that what we would typically refer to as the Reaction Control System was in fact the Orbit Attitude and Maneuvering System so why was there a separate Reentry Control System, and what caused the common acronym meaning to change?

The Orbit Attitude and Maneuvering System (OAMS) was for orbit and was jettisoned before the retro burn, leaving the RCS for reentry.

The com­plete OAMS had 16 small engines, which burned hypergolic propellants fed under pressure from one fuel (monomethylhydrazine) and one oxidizer (nitrogen tetroxide) tank. All engines were mounted in fixed positions and were run at fixed levels of thrust. Eight of the OAMS engines were rated at 111 newtons (25 pounds of thrust) and fired in pairs, allowing the pilot to pitch, roll, and yaw the spacecraft and so control its attitude. The other eight engines were rated at 444 newtons (100 pounds of thrust); two were oriented to fire forward, two backward, and two to each side. This was the maneuvering part of the system. In July 1962, the rated thrust of the two forward-firing en­gines was reduced to 378 newtons (85 pounds).

A second spacecraft rocket system, the reentry control system, was functionally distinct from the OAMS but used the same kind of en­gines, so the same contractor would develop them. The reentry control system comprised two rings of eight 111-newton (25-pound) thrusters located forward of the crew cabin. Either of the rings alone could handle the job, but the function was crucial enough-holding the spacecraft attitude steady during its reentry into the atmosphere-to justify complete duplication.

On the Shoulders of Titans page 87

As far as the acronym changing, NASA started to call "re-entry" just "entry", and instead of the separate systems for orbit and entry, spacecraft like the shuttle had just one multipurpose system.

Starting from Organic Marble response, I would say that OAMS and RCS formed, together, a Reaction Control System, with an unlucky overlapping of acronyms: OAMS+RCS=RCS. But I would better say OAMS+RECS=RCS

Having two separate and independent systems improves reliability by adding redundancy. And RECS itself was redunded (2 rings), so we have triple redundancy.

3
What are the limitations of monopropellant RCS thrusters in a re-useable spacecraft?
9
During the MSL (Curiosity) Mars atmosphere entry, when was the last time the Reaction Control System used?
1
RCS or Reaction Wheel for a 30kg cubesat
3
Did the Apollo Command module really "skip" within, or off of the atmosphere as a part of its reentry program?
28
Could the Columbia crew have survived if the RCS had not been depleted?
8
How was AS-212 (Saturn 1B) supposed to carry both a CSM and LM?