Have things been intentionally welded in space? If so, what kinds of metals and techniques were used, and why was it necessary?

This got answered on Quora too.

So, this link puts out the basics:

Georgi Shonin and Valeri Kubasov, Russian cosmonauts who crewed the Soviet Soyuz 6 mission to space in 1969, were the first to experiment with welding in space, using a versatile tool known as the Vulkan. .. in a depressurized environment, electron beam welding, low-pressure compressed arc welding and arc welding with a consumable electrode.

It would not be until 1984 that welding is performed outside in the vacuum of space.

In 1984, Svetlana Savitskaya and Vladimir Dzhanibekov of the Soviet Union used a hand-held electron beam gun to conduct welding, cutting, soldering and spraying experiments outside of the Salyut 7 space station.

Svetlana Savitskaya, already making history as the first woman to perform EVA, went on to carry out the first welding in space.

The tool was known as the URI (Universalny Rabochy Instrument) or VHT (versatile hand tool). It weighed 30kg.

Before the flight, the URI had caused great concern on the ground: some engineers felt that its high operating temperature and heat production might damage the cosmonauts' space suits.

Savitskaya used the device to cut a 0.5 mm titanium sample and she performed six cuttings of titanium and stainless steel, two silver spray coatings of anodised aluminium and six soldering tests of tin and lead solder.

Long after the mission it was revealed that the experiment was actually in two parts:

One, to see that the equipment performed and that cosmonauts could use it in space.

Two, to train to repair an external oxidizer fuel leak that had presented itself on an earlier mission.

After the mission the responsibility for the repair went to Kizim and Solovyov instead, who would carry it out years later. 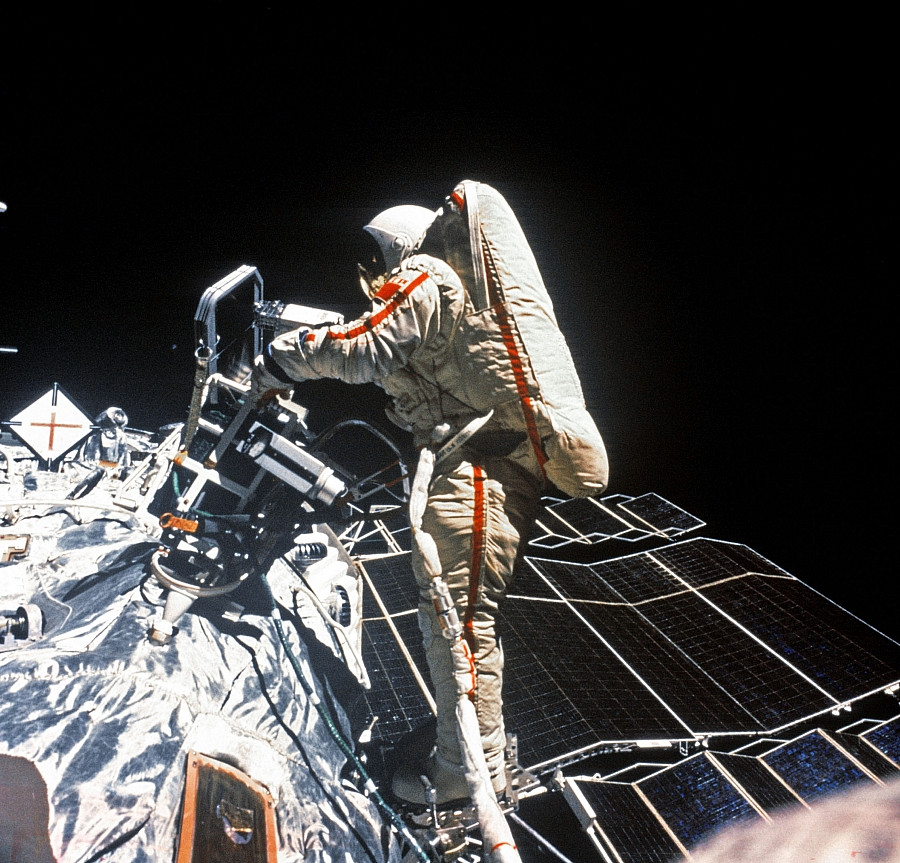 In May 1986, Cosmonauts Leonid Kizim and Vladimir Solovyov carried out welding, this time on the Mayak truss that had been erected on the front of Salyut-7 space station.

The aim was to show the designers and engineers back at the Paton Institute of Electric Welding in Kiev the suitability of construction welding in preparation for the projects Mir and Mir-2, the latter designed to deploy large antenna on large trusses.

There was also an unannounced welding job performed by Leonid Kizim and Vladimir Solovyov, which was to repair an oxidizer fuel line leak, with Dzhanibekov talking them through it from the ground.

Dzhanibekov and Savitskaya had trained for this during their EVA back in 1984 and since then had prepared instructions for Kizim and Solovyov to follow.

So, these early welding experiences turned out to not only be experiments but were also actual repair and construction jobs.

From 1986-1990, a revised, smaller version was carried to Mir. Unfortunately I have not read any information regarding its use on that space station.

US research into on-orbit welding, consisting of experiments on metal melting, brazing, and sphere forming using EBW was conducted during the SkyLab missions in the 1970s.

NASA and Paton Institute of Electric Welding collaborated to develop the In Space Welding Experiment (ISWE), an EBW experiment to be conducted in the space shuttle's cargo bay, but this experiment was never flown. 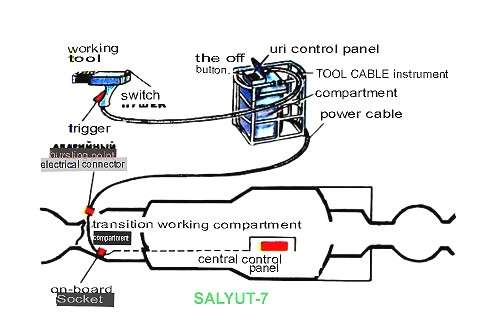 This shows the route arrangement to allow welding during EVA on Salyut-7. 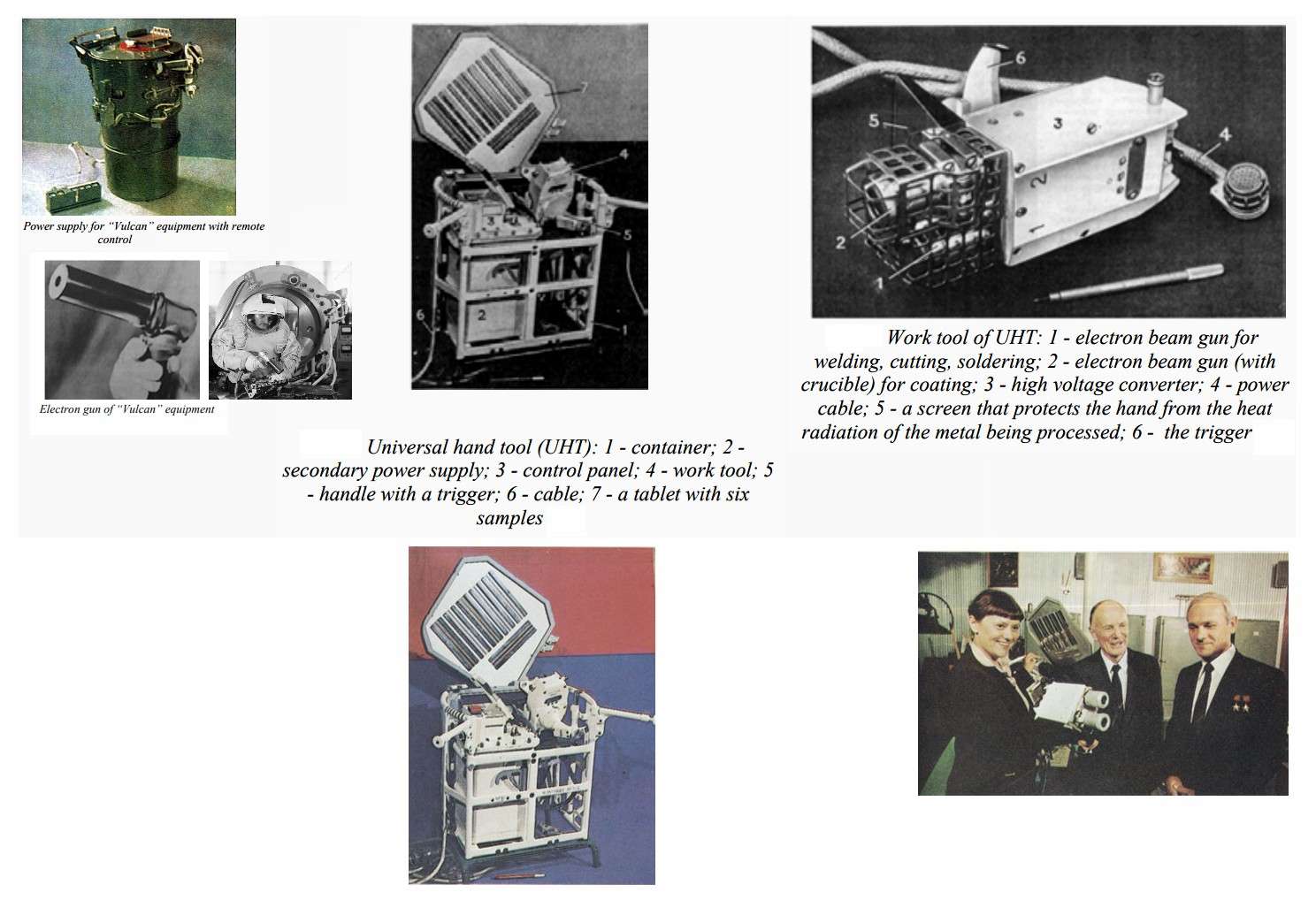 As a side note, the Russian 2017 film "Salyut-7" depicts a slightly fictional account of Savitskaya's EVA and other (some very fictional) incidents.

The materials considered are those used for welding in space or have the potential to be used in the future (Aluminium, Titanium, Metal matrix composites, austenitic stainless steel, and martensitic stainless steel). The technique used was EBW (electron beam welding).

Electron beam welding was chosen because it has no problems with beam reflection on the molten metal and since it needs to operate in a vacuum, this makes this process especially suitable for welding of titanium alloys that cannot be welded in an open atmosphere, for space applications, where vacuum is unavoidable.

the efficiency for EBW of steel at the start of the weld is about 60%, and increases to 90% to 95% during welding. Because of the reflective nature of molten metals laser beam welding is less efficient than EBW.

It may just be Soviet propaganda at the time but the test materials from the 1984 experiments were brought back and inspected. The welding results were found to be strong and just as good as if they had been carried out on Earth.

Savitskaya was said to have found it 'easy'.

I am pretty sure I saw results of the welding experiments displayed, along with something approaching diagrams or close ups of the joints, brazing and other techniques that they carried out...but I'd have to find them....

The results of welding on the truss on Salyut 7 was also supposed to be successful with the Commander performing an unscheduled climb, stopping near the top to wave at the tv camera and shake the truss as much as he could.

The truss was dismantled afterwards but was left on Salyut-7 as the cosmonauts already had about 400kg of experiments to fly back to Mir with (the only mission to have flown in-between different space stations).

The previously unknown repair job was also deemed a success.

Whilst I do not believe any welding equipment is carried on the ISS, as stated before, Mir did carry an improved version.

Not the answer you're looking for? Browse other questions tagged reduced-gravity-manufacturing cold-welding or ask your own question.

13
What is this long truss associated with Mir?

16
What (if any) replacement parts have been 3D printed on the ISS and then installed?