What is the sun-lit aura/haze seen above the Space Shuttle post-ET separation? 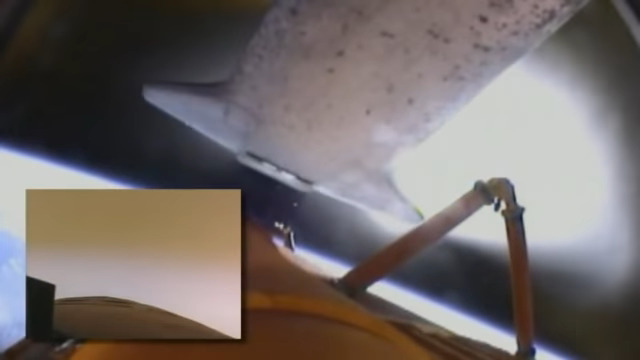 Watching that video for the nth time since 2011, I realized I never really asked what that sun-lit haze seen post-external tank separation is.

This is what I would expect a delta-wing to produce in thick and humid atmosphere due to vortex lift, but does such a high altitude have sufficient water content to produce this vapor-like haze, or is it something else?

space-shuttle stage-separation
Share
Improve this question
asked May 12 at 17:39

tl;dr The "clouds" seen in the video are Reaction Control System (RCS) jet plumes created by jets firing for attitude control and to fly away from the tank. They are interacting with a low-dynamic-pressure flow field around the vehicle.

I couldn't find a explicit reference that says exactly what I said in the tl;dr so I'll just try to back it up with some explanation of why I think so.

First, there is some atmosphere there but it's very little; ET sep happened at ~370K feet at a speed of ~25.6K fps. Even with the rarefied air at that altitude, that speed is enough to give a dynamic pressure of ~0.1 psi, so there was definitely some fore-to-aft flow interaction going on with the plumes in the video.

After the main engines shut down, the attitude of the Orbiter was being controlled by the onboard computers in a mode called the TRANS DAP - Transitional Autopilot.

(This next quote is old - for example, the tumble valve was deleted pretty early on, and OMS-1 wasn't routinely performed later in the program - but the takeaway should be that there's a lot of jet activity going on in this time frame)

All of this refers to the "big" 870 lbf primary RCS jets.

After initiation of the separation sequence, there is a mated coast with issuance of a series of commands and status checks. The ET tumble system is activated 7.2 seconds after the MECO command. Rate damping and attitude hold after SSME thrust tailoff is performed with the TRANS DAP using forward and aft RCS systems. The body attitude is snapshot at initiation of the TRANS DAP. The attitude deadbands (roll, pitch, and yaw) are set to +5.0 deg/axis. Body rates (roll, pitch, and yaw) for attitude rate control are +0.3 deg/sec/axis.

The Orbiter structurally releases the ET at MECO-confirmed +17 seconds. RCS jet firing is initiated 0.16 seconds prior to structural release to assure a positive separation rate between the Orbiter and ET and to preclude possible damage at the forward attach strut. Maximum time delay from the first to the last structural release is not greater than 0.02 seconds. The Orbiter performs a high mode RCS -Z translation for the translational delta V > 4.0 fps, which is then followed approximately 2.0 seconds later by a +Y translation for a delta V of 4.0 fps.

Four forward and six aft RCS jets are used to achieve the translational AV of 4.1 fps. Thrust duration for this nominal -Z translation is 5.3 seconds. An attitude deadband of + 3.0 deg/axis and rate deadband of + 0.3 deg/sec/axis are maintained during the maneuver. The -Z translation assures Orbiter clearance from the arc of a rotating ET.

Approximately 2.0 seconds following the -Z translation a +Y translational maneuver is executed for a delta V of 4.0 fps. Two side - firing RCS jets (one forward and one aft) are used to perform the +Y translation and thrust duration is for 24 seconds. An attitude deadband of +/- 3.5 deg/axis and rate deadband of +/- 0.3 deg /sec /axis are maintained during the maneuver. The +Y translation places the Orbiter out-of-plane from the ET to a more preferred relative position for performing the OMS-1 burn.

This is a newer quote just to show that the RCS jet requirements still existed late in the program. 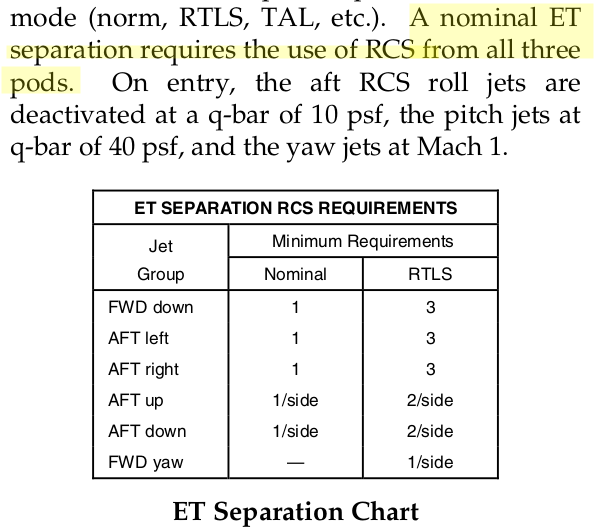 Not the answer you're looking for? Browse other questions tagged space-shuttle stage-separation or ask your own question.