Is it possible to perform powered flight on the upper atmospheres of gas giants?

After reading about Ingenuity, whose main challenge I heard was dealing with the relatively thin atmosphere of Mars, I wondered if the thicker atmospheres of gas giants could allow for powered flight similar to Ingenuity?

Obviously this would exclude Jupiter and Neptune, the former due to its highly powerful magnetic field and the latter due to its extremely fast winds. For the remaining two gas giants, could anything achieved powered flight there, perhaps in the upper atmospheres so that the magnetic field isn't as strong? I recall reading Uranus for instance has magnetic fields ranging from 0.1 to 1 Gauss which should be somewhat bearable for any unmanned craft.

Could such a hypothetical flyer also fly along the direction of the wind so that they're not blown to pieces as well?

We are used to handling small magnets where the gradients are large, the field near each pole surface is much larger than just a few cm away, so ferromagnetic metal objects are strongly attracted to the poles.

In a nearly uniform magnetic field, a piece of steel or iron is not pushed or pulled at all. There is no gradient, so there's no decrease or increase in energy moving in any direction.

There certainly can be torques on the object about its center of mass, but those can be zeroed out by distributing any ferromagnetic materials (or internally generated fields due to permanent magnets or electromagnets) through some careful engineering by balancing their distribution, adding some extra electromagnets to null the torque (magnetotorquers) or just plain internal shielding or flux closing, like the yolks around motors that have permanent magnets inside.

The magnetic part (2nd term) of the Lorentz force

says that there is a force on a charge that's moving in a magnetic field.

If the field is uniform and the charge is in a conducting loop like a circuit or a metal satellite frame, then this will induce no net current in the loop, so don't worry about eddy currents producing drag and loss of altitude (at least to first order).

What will happen though is that the Lorentz force will tend to push charges to one side of the spacecraft; there could build up a small static dipole charge across the craft pushed there by the Lorenz force until their electric field were just strong enough to cancel the Lorentz force.

So at orbital speed in our Karman plane which hopefully you won't be doing, the field built up across a 1 meter wide spacecraft at the 1 atmospheric pressure point (1 bar) of Jupiter's atmosphere will be 17.7 volts, using

where the voltage difference $\Delta V$ is equal to the distance across the spacecraft $d$ times the electric field $E$.

At a nice Piper Cub cruising speed of 34 m/s it's only 14 millivolts, so not much to worry about.

Basically, just build your craft to work in 10 gauss and you can fly pole to equator (where it's double the strength at the equator and pointing up/down) without worries.

This rough graph I made gives a sense of the (aerodynamic) difficulty of flight on other planetary bodies: 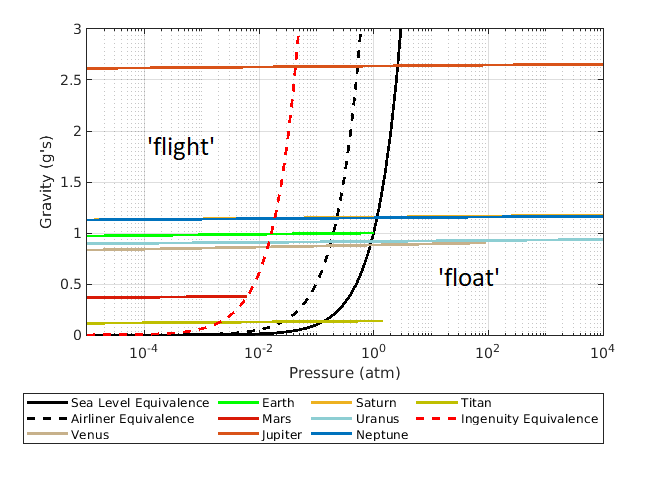 Consider pressure analogous to density (and thus analogous to lift). The 'equivalence' curves are equal gravity-to-pressure ratios (1:1 for sea level, 5:1 for airline heights [think 1g at 0.2 atm pressure]). They are a sort of 'contours of (aerodynamic) difficulty' measure. The 'float' region is approximately where buoyancy starts to play a non-negligible role.

Interestingly, flight on Titan is about as big a leap towards 'float' as Ingenuity was towards 'flight'.

Not the answer you're looking for? Browse other questions tagged probe uncrewed-spaceflight or ask your own question.

20
What defines the radius of a ball of gas like Jupiter?
12
What would a "Kármán plane" look like, a bird, or a plane?

19
Do the Voyager space probes perform time synchronization regularly?
5
How do we measure the atmospheres of Solar system planets?
14
Did we know the gas planets were truly gaseous before Pioneer 10?
8
Is there any plan to send balloon like probes to gas giants to explore interior of gas giants?
0
commercial launches - what is the growth rate of commercial space flight?
15
How does a space probe maintain its trajectory while passing through the extreme gravitational field of the gas giants of our solar system?
1
Could we use the atmospheres of planets like Mars or Jupiter to separate xenon from them to replenish the engines?
2
Why didn't the Galileo spacecraft take an image in Jupiter's upper atmosphere?
4
How is the space probe powered to travel a huge distance in a deep space mission?
3
Venus probe with refrigerated electronics powered by an RTG (more like the Mars rovers)