Has Curiosity ever taken a good hard look at the dirt covering its top surface? Can it? Have individual particles been sized?

A reasonable answer to any one of the three enumerated parts gets the bounty!

I added some dirty pictures of Curiosity to Curiosity is still dirty! after August 9, 2018 (Sol 2137), and in this March 2021 selfie PIA24543: Curiosity's Selfie at Mont Mercou things still look roughly the same almost three years later.

There are some cropped bits below from the 21 MB JPEG downloadable there. 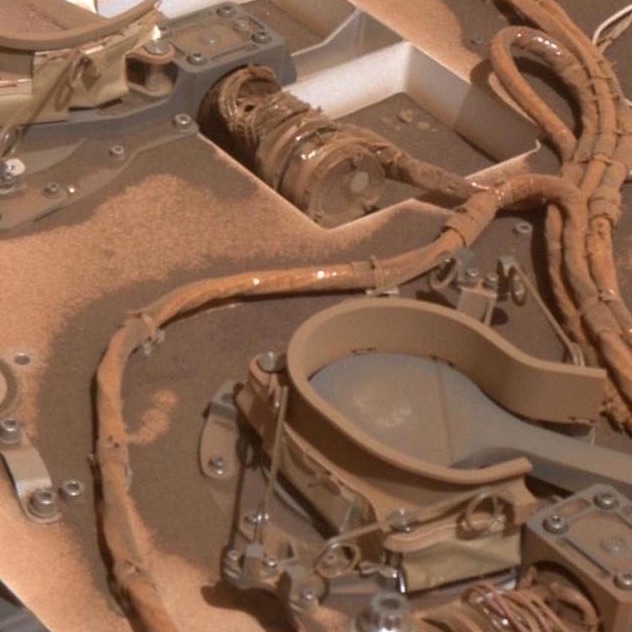 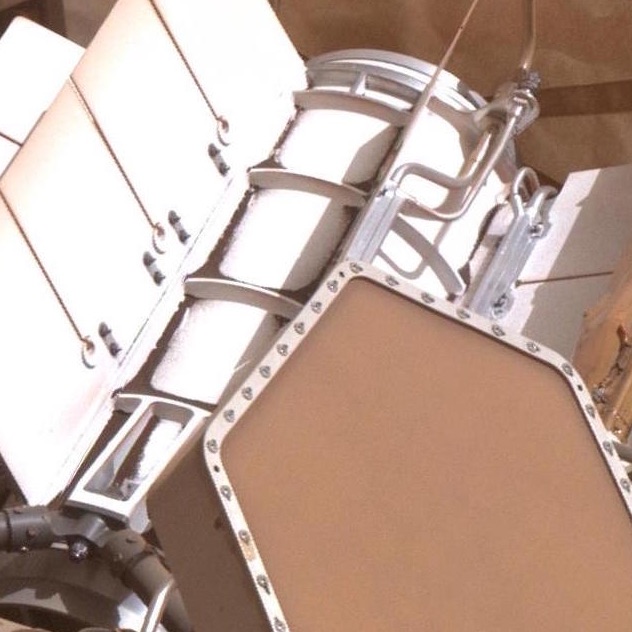 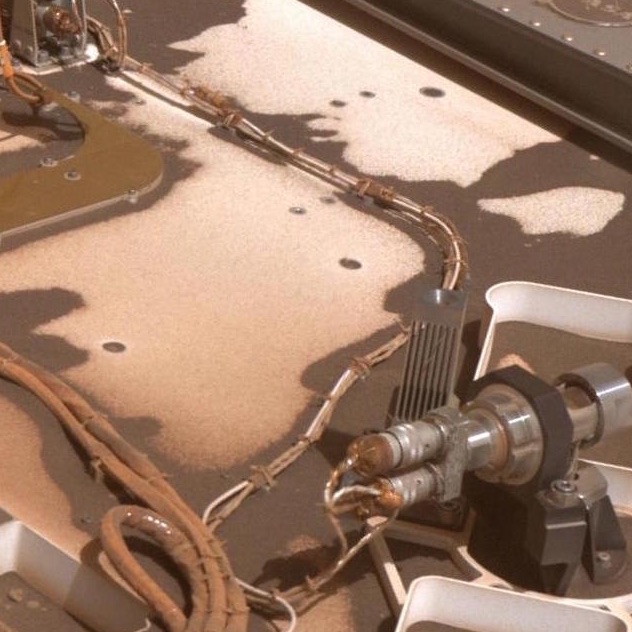 3: Yes. The full-resolution image resolves individual dust grains. The bolt heads in this image can be used as a reference to estimate grain size. So can the connector at the bottom of the image, labeled M83513/02-DN, whose datasheet identifies it as a 25S layout, 30.01 mm wide. So the largest grains are about 0.3 mm. The smallest grains, like those filling the connector's label, are unresolveable, but MAHLI has taken an even closer look at this box. 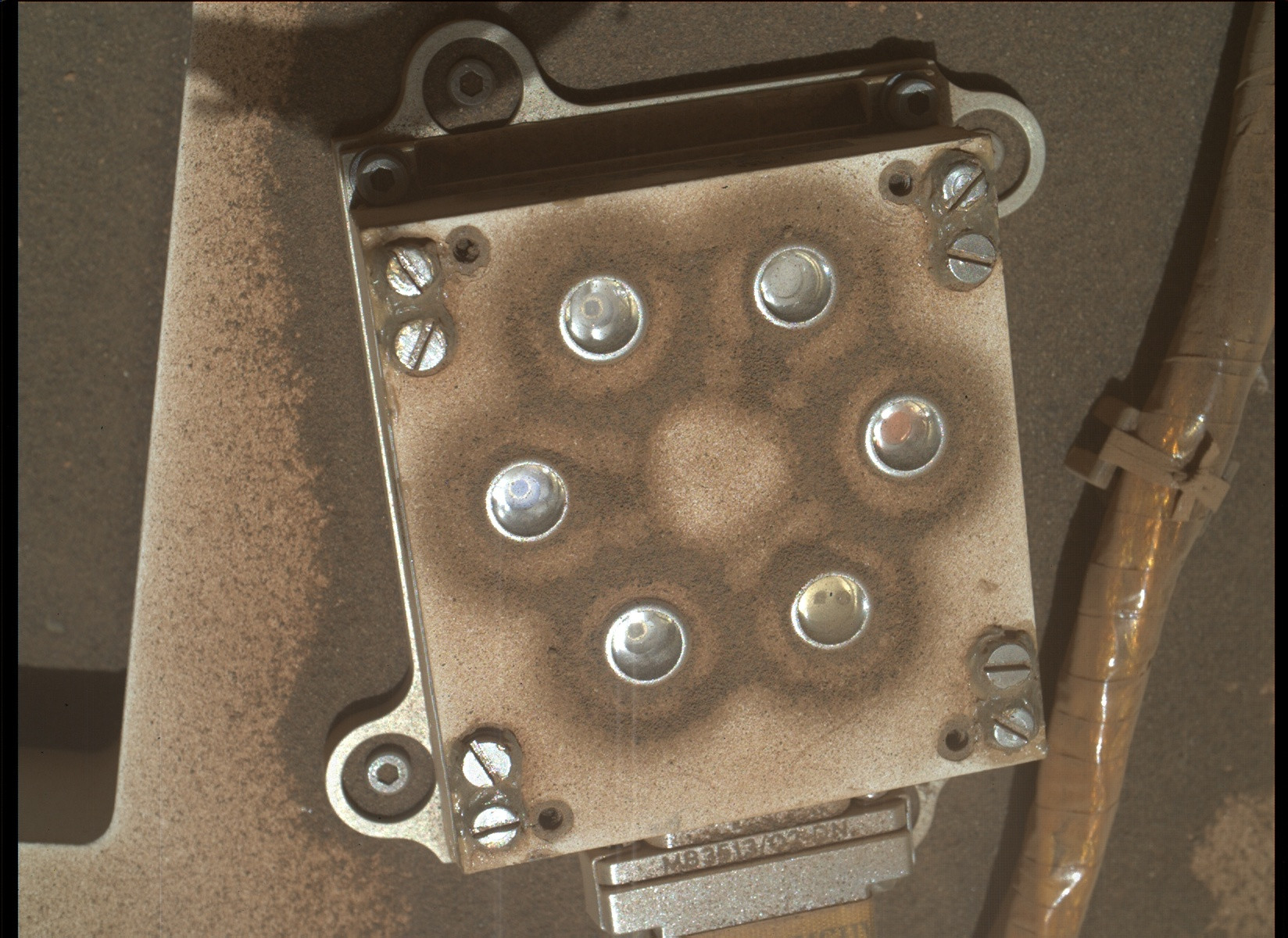 MAHLI also looks at its rover-mounted calibration target, of course, as shown on its wikipedia page. A close-up thereof might include smaller dust grains, for instance.

From that closer look:

NASA's Mars rover Curiosity acquired this image using its Mars Hand Lens Imager (MAHLI), located on the turret at the end of the rover's robotic arm, on June 10, 2021, Sol 3144 of the Mars Science Laboratory Mission, at 15:34:15 UTC.

The focus motor position of 13257 suggests a distance of 15 to 20 cm with a scale between 60 and 77 microns per pixel which is consistent with an estimated 13 pixels per mm using the 30 mm (390 pixel) connector as a scale bar. One can estimate that grains of 4 pixels might be barely resolved.

Had the camera been moved to the closest distance mentioned above with a scale of 16 microns per pixel, dust grains less than 100 microns should be resolvable.

Not the answer you're looking for? Browse other questions tagged mars curiosity photography dust regolith or ask your own question.

32
Who took the Curiosity rover's self-portrait photo from the surface of Mars?
20
Curiosity is still dirty! How will the ExoMARS Rover keep its solar panels dust-free and collecting sufficient power?
2
What is MAHLI's theoretical or expected best optical resolution? How was it defined? Was it verified on Mars?

13
Have there been any photos taken of a total Earth-Sun eclipse from the Moon, or its vicinity?
20
Curiosity is still dirty! How will the ExoMARS Rover keep its solar panels dust-free and collecting sufficient power?
4
Has the Curiosity rover ever communicated directly with Earth via its high-gain antenna? Signal strength & data rate?