Why allow communication with interplanetary spacecraft to be silent for stretches of time; only getting updates on certain days & times of the week?

Communication between planetary bodies in space, e.g. from the moon, or Mars, takes a long time and has many shortcomings, like line of sight requirements.

Communication with interplanetary spacecraft is often silent for stretches of time; only getting updates on certain days & times of the week.

Why is this enough to be acceptable for deep space exploration?

What are the challenges with improving this? So far it does't seem like a priority, so there must be some reasons why this is okay, can it be expressed in an answer?

I was thinking about repeaters, or store-and-forward schemes, are these possible?

mars communication interplanetary
Share
Improve this question
edited May 16 at 22:07

Our farthest functional spacecraft -- the Voyagers (VGR1, VGR2) and New Horizons (NHPC) -- communicate less frequently. However, I did catch a rare occurrence of all three of them on the DSN on Nov 21, 2020: 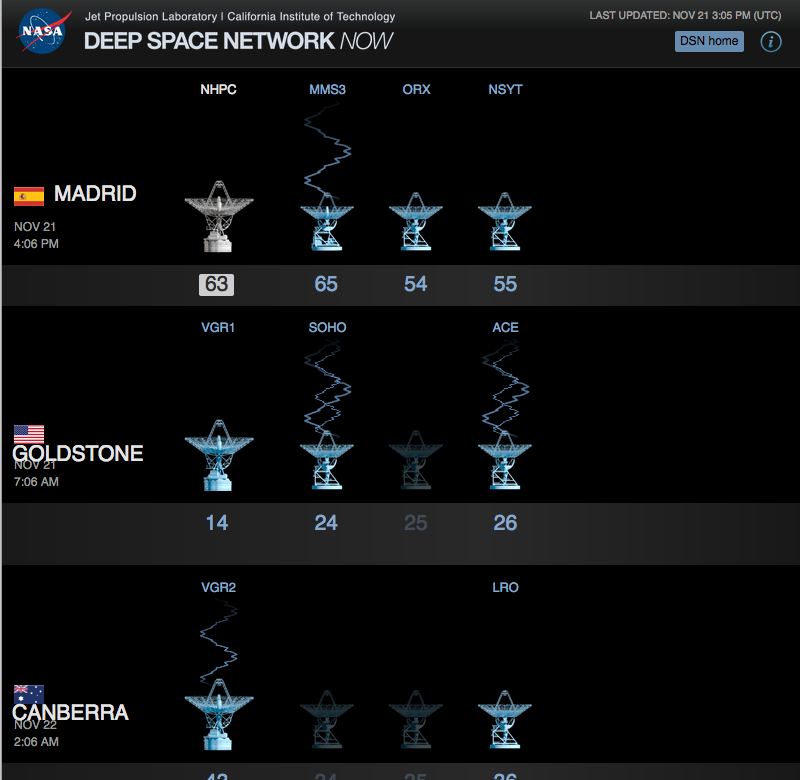 You also mentioned relay networks. We've had questions before about them. Stations on Earth can be built more cheaply, with larger dishes and more power than those in space, and can be maintained/upgraded. Also, a relay spacecraft might be "in between" the Earth and a target today, but its orbit will eventually put it farther away than the Earth is to the target.

The one exception is the Mars Relay Network. However, this has more to do with the Mars day/night cycle than with other considerations. The downloading of data and pictures, mission planning, and the uploading of commands is often done during the Martian night; so that driving, performing experiments, and taking pictures happen during Martian daylight. (I read about this somewhere on mars.nasa.gov about a week ago, but I can't find the page now.) Since the nighttime side of Mars faces away from Earth, relay satellites in orbit around Mars are needed.

The Deep Space Network is an amazing resource developed over the years to manage the communications and navigation tracking of dozens of interplanetary missions. With large radio antennae built in locations carefully selected across Earth, the DSN schedules commmunication times for all active and quiescent spacecraft.

When a mission is arriving at and entering a dynamic phase of its mission when near-real-time data and commanding is important, it gets high priority relative to the other missions. When a mission is cruising for months with minor course adjustments (a.ka., quiescent), it gets periodic check-ins. Since all of these interplanetary missions, so far, have been robotic it is fine to not maintain constant communication with all of them.

There are efforts to build up commercial networks to provide additional capability.

Repeaters have not been necessary. At Mars NASA is using the orbiting missions to provide communication relays for the surface missions. This allows additional data downloads when the surface site is not in line-of-sight with the DSN antennae on Earth, as the orbiters come into view every hour as they race around Mars.

The communication bandwidth used between an Earth Station and a distance spacecraft is basically a narrowband to reduce power transmitted from the craft. Redundancy bits, for error correction is introduced and compression algorithms are applied along with the transmitted data.

Hence, the data transitted is serialized over a bandwidth. At Earth Station receiver end, these signals are forwarded corrected and the audio,video or temetery signals are reconstructed. Hence, there is a delay involved during reception.

Not the answer you're looking for? Browse other questions tagged mars communication interplanetary or ask your own question.

17
What makes time on the DSN so expensive?
4
Is a space probe communication relay possible?
3
Are relay stations possible between planets?
2
Would a long-term network of relay satellites but worthwhile for interplanetary communication?