Is there independent evidence that China landed a robot on Mars in May 2021?

I would like to know if there is independent evidence of any kind that China landed a robot on Mars in May 2021?

As of May 16, 2021, the last news on CNSA (China National Space Administration) site is this one:

Tianwen-1 probe will land on Mars in next few days

China’s first Mars exploration mission, Tianwen-1 probe has functioned normally since its successful launch on July 23rd, 2020. On February 10th, 2021, Tianwen-1 probe entered the Martian orbit for scientific exploration and huge amount of scientific data are available up to date. With the evaluation of the flight status, Tianwen-1 probe is scheduled to perform landing campaign targeting Utopia Planitia at the proper slot from the early morning of May 15th to May 19th Beijing time.

There is no other statement saying that the landing already happened.

Xinhua has an article: "China's probe lands on Mars" but the text is vague and quotes CNSA. Nothing is said about the health of the lander/rover and no pictures are available. 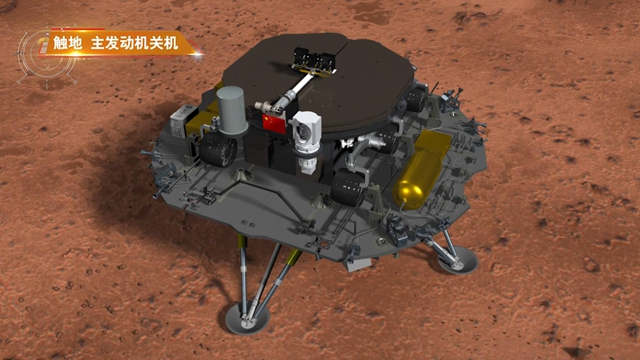 It is the first time China has landed a probe on a planet other than Earth.

The craft's plummet through the Martian atmosphere, lasting about nine minutes, was extremely complicated with no ground control, and had to be performed by the spacecraft autonomously, said Geng Yan, an official at the Lunar Exploration and Space Program Center of the CNSA.

Tianwen-1, consisting of an orbiter, a lander and a rover, was launched from the Wenchang Spacecraft Launch Site on the coast of southern China's island province of Hainan on July 23, 2020.

It was the first step in China's planetary exploration of the solar system, with the aim of completing orbiting, landing and roving on the red planet in one mission.

The spacecraft entered the Mars orbit in February after a journey of nearly seven months through space and spent more than two months surveying potential landing sites.

Yes, there is. This image from HiRISE shows the landing site of the Zhurong rover on Mars and the rover itself. See also BBC page which has the same image, as well as this Nature article

These images originate from a NASA orbiter, which I believe makes them independent.

I think this is moderately convincing evidence.

See this question which exists so there can be an accepted answer for reference.

This page documents transmissions received around the landing time, received on a 20 m amateur dish.

Update 2021-05-19: CNSA have released two surface pictures and two brief videos showing separation of the lander from the orbiter here.

0
What independent evidence is there that the Zhurong rover landed on Mars in May 2021?
4
What's the exact location (lat/lon) of Zhurong?
4
Why are deep space "beacons" usually UHF, so low (in freq) that DSN can't hear them? And how unusual is it for a Mars lander to have an X-band beacon?
6
Was the Doppler shift of InSight's "tone" measured and plotted somewhere?

40
Why is China still not invited to the ISS? (Or, why do certain countries not get invited/rejected to work on the ISS?)
41
Why did multiple nations decide to launch Mars projects at exactly the same time?
5
What are these details on (renderings of) the Zhurong rover's wheels?
3
Is the sky of Mars black (except its lower side toward the horizon)?
2
Why is it so cold in the nighttime (-130 C at 25.1 degree North) at the location where the Chinese rover landed on Mars?
7
Will there be a command moratorium for Mars spacecraft again in 2021?
15
Cartoon-like characters on the side of the Tianwen-1 Mars lander?
6
What's been going on with the Emirates Mars Mission after it got to Mars?