Note that I have referred to Starlink, Amazon, and OneWeb, but I am talking about constellations in general, not only about internet-from-space ones. Also, I am interested only in constellations with at least 5 satellites.

Is there a webpage where I can see the list of LEO satellite constellations?

Yes! Celestrak has several pre-arranged groups of satellites and many of those groups can be seen as constellations, and a few could be argued to be or not to be constellations as well. That's up to you.

This is not exhaustive but it is probably 90%. 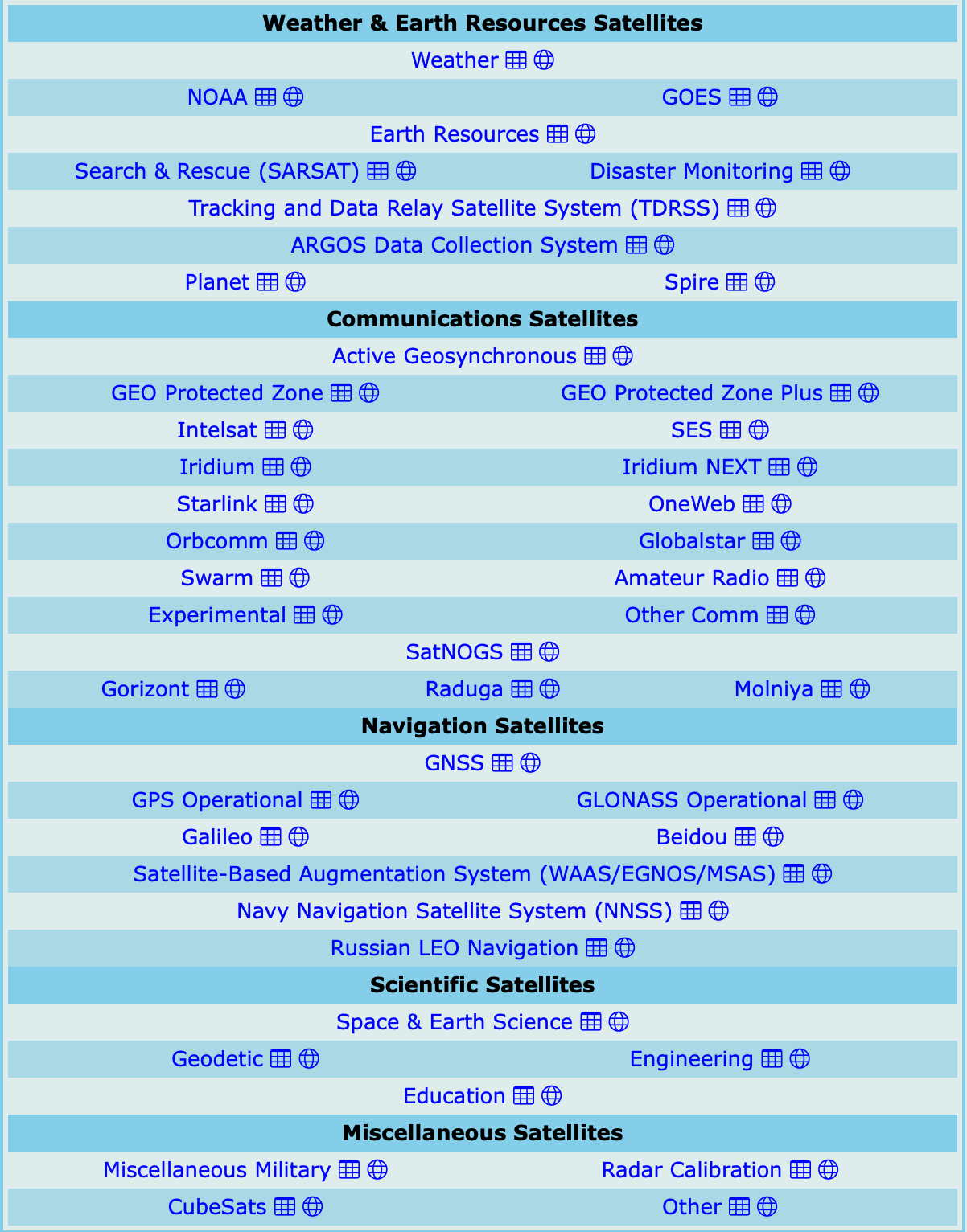 The quickest way to get altitudes to decide if they are in LEO or not is to look at the mean motion, the number of orbits per 24 hour (not sidereal) day. Take this TLE (chosen at pseudo-random because I like things with 42 in them):

It orbits about 15.12647756 times a day. To about 1 part per thousand accuracy (the Earth is lumpy and has higher order gravity terms than monopole) we can use the Earth's standard gravitational parameter $GM \ = \ \mu$ of 3.986E+14 m^3/s^2 and the orbital period equation to estimate the semimajor axis: 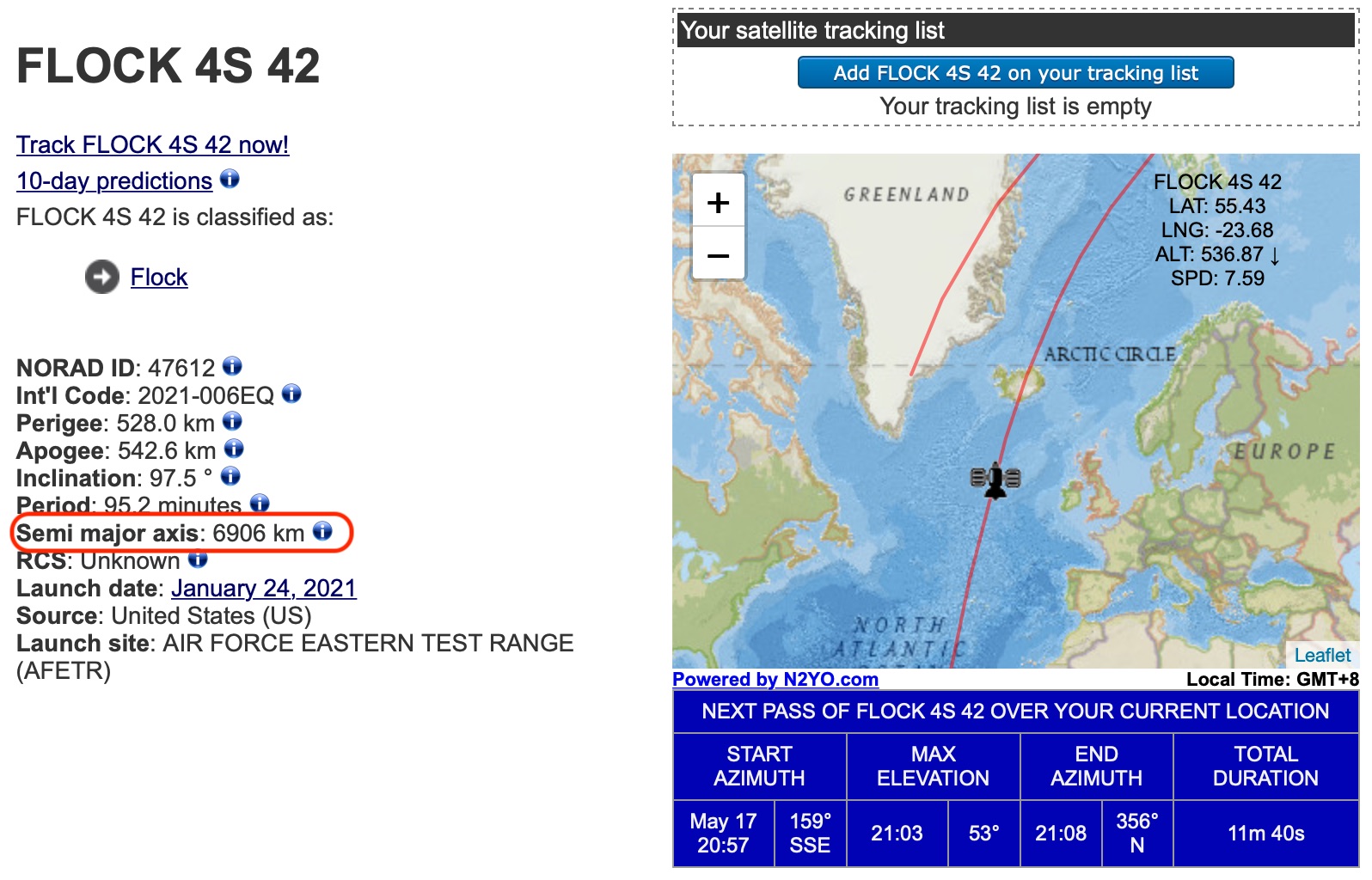 Traditionally we subtract the Earth's equatorial radius 6378 km from that to get an "altitude" even though the Earth is not exactly spherical. In this case it would be 528 km average. This is not half-way between perigee and apogee in n2yo because they use a more precise algorithm for calculating altitudes that does include the Earth's oblate spherical shape; 6378 km is the largest value at the equator, but it's 10's of km lower near the poles.

You can choose your own cutoff for altitude to decide what is or isn't in LEO.

Then again you can try Wikipedia's definition

A low Earth orbit (LEO) is an Earth-centred orbit close to the planet, often specified as an orbital period of 128 minutes or less (making least 11.25 orbits per day) and an eccentricity less than 0.25

In this case you can just check that the mean motion in the TLE is 11.25 or greater.

If you want to apply the eccentricity <= 0.25 test also, then you can read about how the values are displayed in TLEs in Wikipedia or here.

In this case it's 0010596 and since objects in orbit have eccentricity less than 1 they supres the 0. in front of that to save two whole columns on the "Hollerith" punch cards that were used when TLEs were invented. So the eccentricity for this satellite is 0.0010596 for example.

29
How is the altitude of a satellite defined, given that the Earth is not spherical?
10
How (the heck) are military satellites with (apparently) classified TLEs still showing up on sat map websites?
4
Are there any related groups of satellites that are in a line of 6 or more in a row?
9
Has there ever been a deliberate "Find A Satellite" challenge? Actually, could there be?

9
What engineering processes (satellite/space vehicle related) require an atmosphere
13
Will Glonass, Galileo, or BeiDou-2 satellites provide better cis-lunar navigation than GPS?
26
SpaceX's 4,425 satellite constellation - what's the method to the madness?
54
Is 75 meters an exceptionally close distance for two satellites to pass at >6,000 m/s?
8
What goes into the planning and execution of the deployment of groups of LEO satellites?
5
What does the Starlink constellation look like now? Numbers of planes and inclinations?
2
Impact of Constellations on Space Debris and Launch Windows
7
Technical feasibility of a country at least partially preventing use of internet from satellite constellations?