Is there a simple relation between delta-v and travel time?

For example, if it takes a delta-v of 4 km/s to fly from LEO to Mars in 8 months, according to one mission plan, would it take half the time, 4 months, if the delta-v was doubled to 8 km/s? Is there any rule of thumb relationship, or must a completely new trajectory be calculated for any change of delta-v?

You seem to be thinking in terms of speed, a scalar quantity. Of course if you double speed, you cover a given distance in half the time. 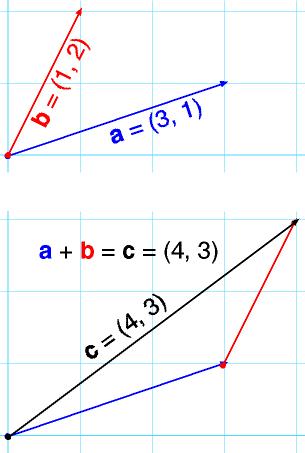 In the above illustration, the red vector would be the delta V (change in velocity) in going from the blue vector to the black vector.

Here's an illustration of an earth to Mars Hohmann: 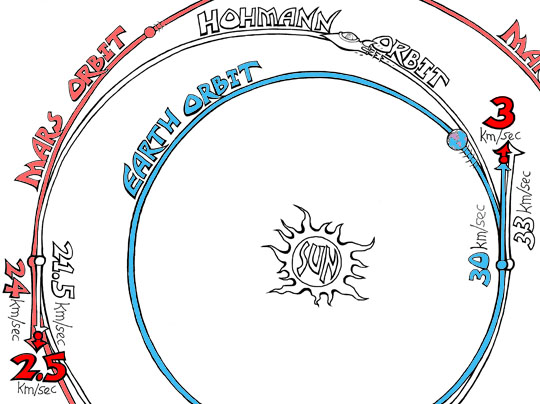 Now here's an illustration of a non Hohmann earth to Mars transfer: 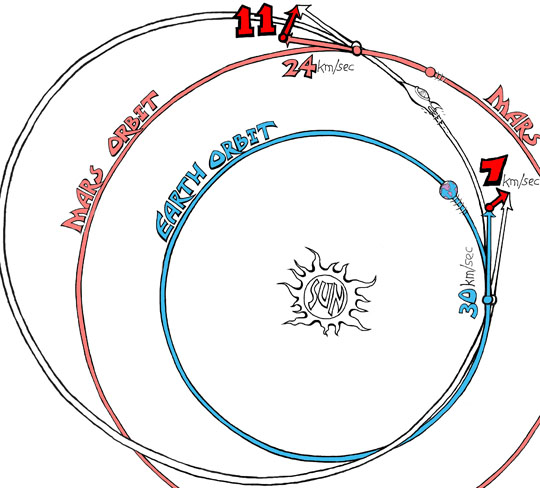 Notice that the mars velocity vector is nearly the same size as the transfer orbit's velocity vector when it crosses Mars' orbit. We don't need to speed up or slow down much. But changing direction requires a lot of delta V.

Deviating from Hohmann for a 4 month trip would boost your delta V by a lot more than double. This is due to direction change non Hohmann transfers require.

Here are three more examples, transfer orbits depicted by Rikki-Tikki-Tavi in another answer to this question. 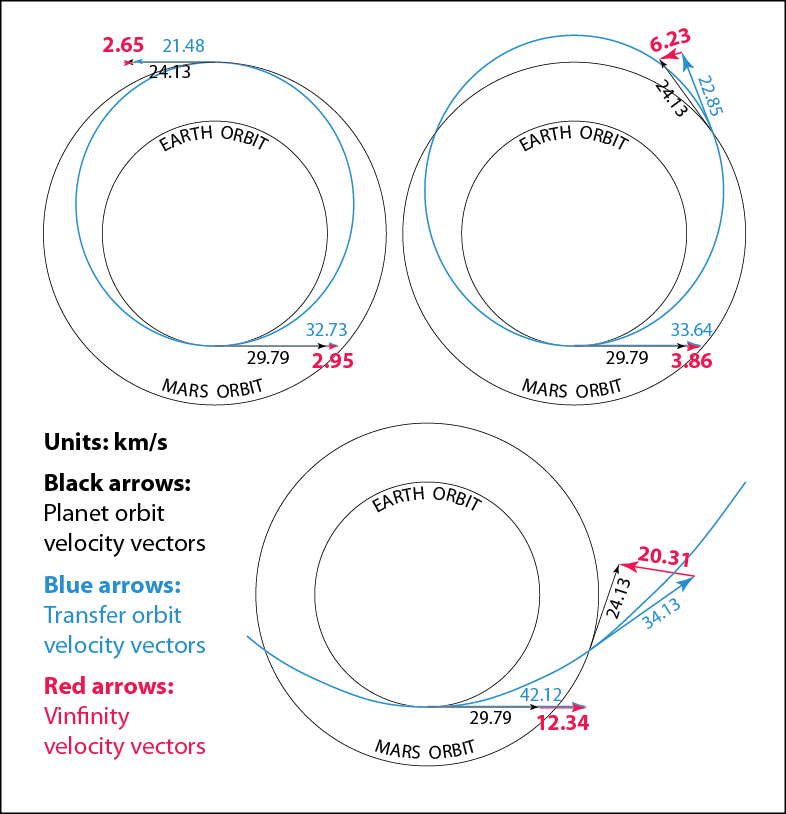 My illustration shows Vinfinity vectors as red arrows. It has Vinfinity quantities for both earth and Mars.

Escape velocity is around 5 km/s near Mars' surface. So a hyperbolic orbit grazing Mars' atmosphere would have a speed of $\sqrt{5^2+V_{inf}^2}$ km/s.

For Rikki's 3 examples this becomes:

The 5.7 km/s is what needs to be shed for Mars landing coming from a Hohmann orbit. Aerobraking can accomplish this for smaller pay loads but for more massive payloads this is hard. Only .7 km/s is needed to brake into a capture orbit about Mars.

Given the 8 km/s hyperbola periapsis velocity, you will need to shed twice as much kinetic for a soft landing. 3 km/s delta V would be needed to brake into a capture orbit about Mars. Rikki seems to believe this is trivial, but it's not.

For a 21 km/s hyperbola periapsis velocity I don't think it's practical to use aerobraking for a soft landing. 16 km/s would need to be shed to brake into a capture orbit. 16 km/s is about what it takes to get from earth's surface to the moon's surface.

A particular delta-v (relative to a given celestial body, such as the Moon) actually implies a particular transfer orbit toward the target body.

Also, delta-v is the difference in velocity (produced by a particular maneuver), it is not an absolute velocity.

So let's say you start out at 11 km/s relative to the Earth (in an approximate Earth-Moon system transfer orbit) and then near the Moon apply a further delta-v of 4 km/s along your direction of travel. Ignoring orbital effects, that will push your orbital speed to 15 km/s. If you instead double the delta-v (which means you need to bring along a lot more fuel, which increases the fuel requirement for achieving the initial E-M transfer orbit, which means you need even more fuel just to get off the ground, and round and round we go in the rocket equation...) to 8 km/s, not only do you end up in a different orbit (so have to redo all the orbital calculations) but also your final velocity is only 19 km/s at most. You gain about 26% in terms of absolute velocity by doubling the delta-v.

An astronaut on a spacewalk in Earth orbit might start out with an orbital velocity of on the order of 7-8 km/s (the orbital velocity of their spacecraft) and apply a delta-v of a fraction of a m/s in order to get to where they want to go. And so on.

For a perhaps somewhat extreme but very real example, consider that Apollo could abort the 11 km/s transfer orbit to the moon by applying an approximate 1.8 km/s delta-v about a third to half of the way from the Earth to the Moon. (True "abort" would require a delta-v of twice the current velocity, to reverse the direction of travel while in the end resulting in the same orbital velocity in a reversed orbit. Even ignoring whether it's practical to "reverse" the orbit like that in the first place, applying an unplanned delta-v of well over 20 km/s to something as massive as the Apollo CSM, let alone the CSM/LM pair, is not an easy feat.) That abort wasn't an option in the case of Apollo 13, but it (and the illustrative graph shown on the Wikipedia page linked) goes to show some of how it's not quite as simple as "double the delta-v, halve the time" or even "double the velocity, halve the time".

It's not necessary to take an entirely different route every time. There is the minimum energy transfer, that you mentioned, but you can use more fuel(or better yet, use a more efficient engine) to take a similar, but different route that takes you there faster. The raise in energy requirement is moderate at first, but becomes uncomfortable if you want to cut your travel time by more than a month or so. I think there is a table in a book I have at home ("Astronautics" by Ulrich Walter). I will let you know.

Also, there are entirely different courses you can take, but I don't think any of them are faster. For example, in some constellations a Venus flyby gives you the chance to return after only a short stay at Mars, rather than waiting out a full cycle.

I misremembered. In Astronautics I found the following two figures (which are even better; read below): 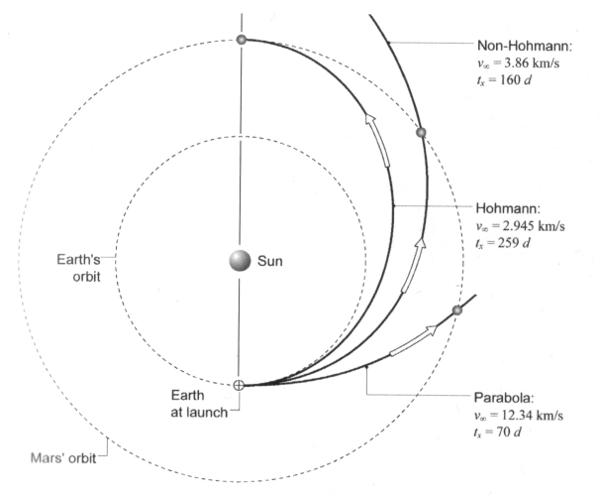 The image above makes three examples of orbits we could fly. You could fly even more extreme courses than the 70 day one, but you can see how the required earth escape speed $v_\infty$ becomes uncomfortable. 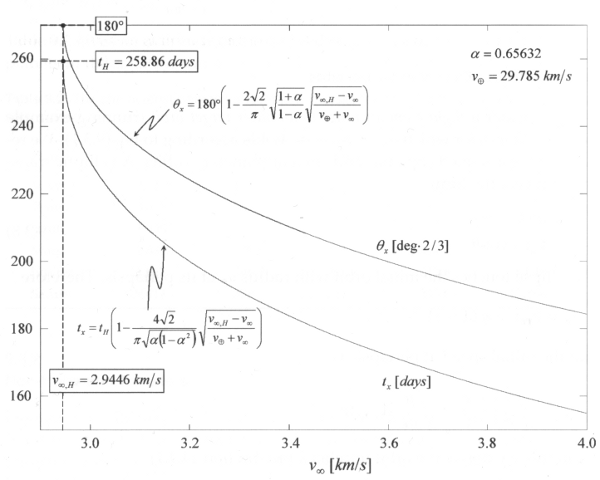 This graph gives us the the same in exact numerical terms. You can see that shortening the time a bit is quite cheap, but then it quickly becomes expensive. $t_x$ is the transfer time. $t_H$ is the time for the Hohmann-transfer. I won't explain all variables involved, I don't think anyone has the patience to read that.

It is true that you also need an burn to turn into Mars' orbit, but I disagree with HopDavid about this being the major factor:

The $\Delta v$ for the for the injection is $v_\infty\sqrt{\frac{1-e}{2}}$ where $e$ is the eccentricity of the orbit around mars and $v_\infty$ is the excess velocity with regard to mars now. This can be very high, because you can slowly circularize the orbit for free by aerobraking. For $e=0.95$ the Mars injection takes only 16% of $v_\infty$. Of course, there is a limit to how eccentric your orbit can be, because you may escape Mars' sphere of influence if you come in too fast.

11
Is it easier to land on Europa/Io than on Mars? What are the main considerations?
5
Earth->Mars: Porkchop, departure burn and orbit inclination
8
Are ion thruster trajectories classified as brachistochrones?
4
Calculating a de-orbit burn, is this problem written correctly?
3
Will NASA put astronauts into a polar lunar orbit? If so, how?
4
Mars and back, staying only a few days
18
If the Earth spun clockwise, how would that affect Space Exploration?
2
Thrust value for space mission from Earth's orbit to Venus' orbit