I've added load relief to my thrust-vector controller (TVC) and would like to simulate it with some realistic wind data, ideally up to 80 km or higher.

I know wind speed and direction would be measured before launch with Jimspheres or equivalent, and I imagine there must be loads of Jimsphere data collected over the years, maybe for the space shuttle or Saturn V, which have so much public info out there.

I haven't had much luck in my search, so I'm wondering if someone here knows where I could find this?

Huge thanks if you can point me in the right direction!

Wind speed in feet per second. Y axis is feet with 10K tickmarks. 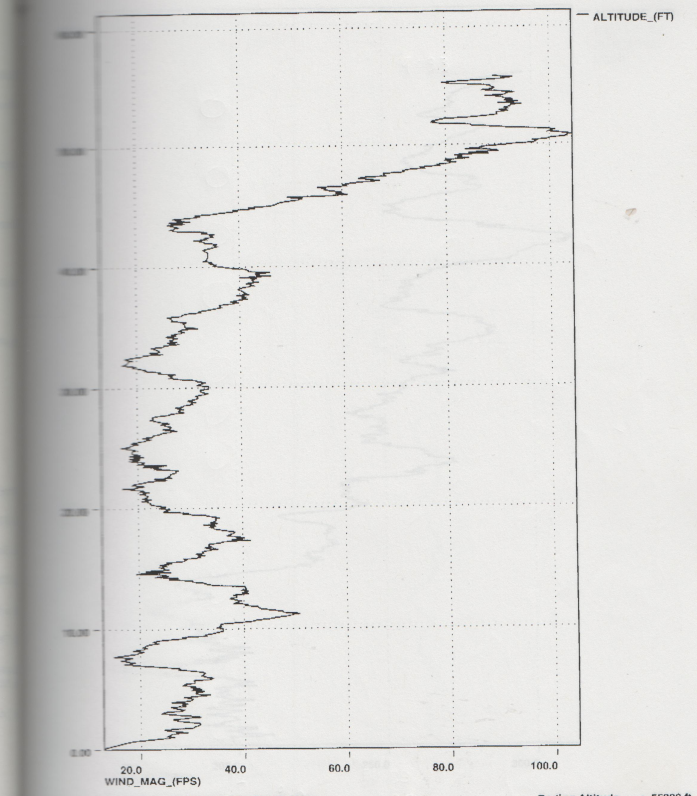 Wind azimuth in degrees from North. Y axis is feet with 10K tickmarks. 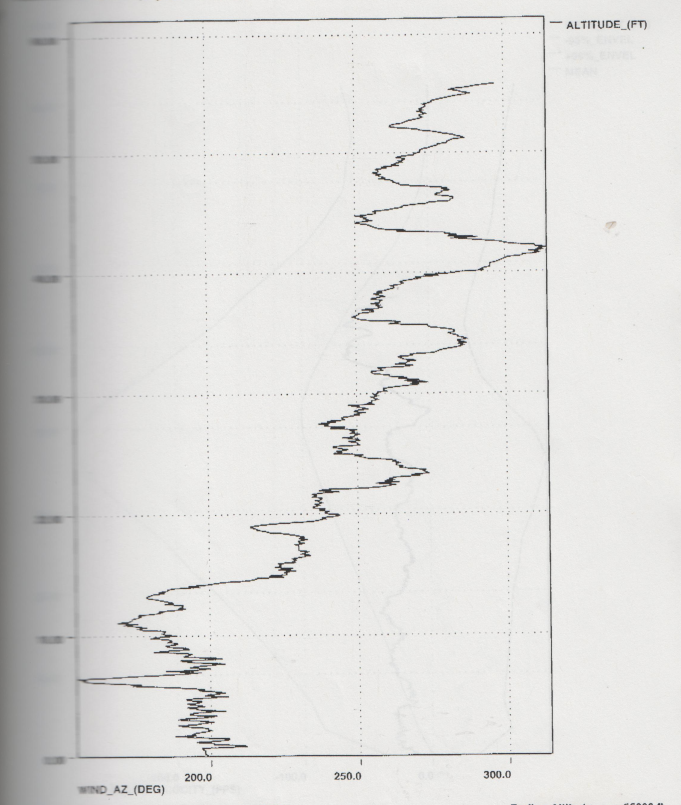 This paper about the Doppler wind profiler at KSC has some more examples on page 9.

More examples here What are "high altitude winds" and why do they often delay rocket launches?

The best I can recommend is an atmospheric model maintained by NASA that includes dispersions up and beyond your altitude of interest. The model, GRAM, provides dispersion estimates across the globe. It works well above 60000 ft. However, at altitudes below that it does not capture local terrain effects from mountains and coastlines. To resolve that, NASA and the USAF have used thousands of measurements from balloons and other sources to build Range Reference Atmospheres (RRAs) that they use to verify requirements for launches and landings at a few select places across the United States (such as Kennedy Space Center).

Finding atmospheric data above 250000 ft is difficult. Back in the 1980s, the American space shuttle orbiters began skimming the high altitudes of the atmosphere for thousands of miles during their return to earth. Reviewing the flight data, NASA discovered density shears or "potholes" in the drag accelerometer sensor data that couldn't be attributed to any vehicle attitudes. The flight data ended up being incorporated into the GRAM model dispersions.

12
How do they determine dynamic pressure has hit a max?
8
What are "high altitude winds" and why do they often delay rocket launches?
2
How were winds measured for ascent trajectory calculations and checks for the Space Shuttle?

9
Optimal speed per altitude for orbit launch
3
Initial condition for SGP4 in satellites without GPS, before the uplink of TLE data
10
Were shuttle seats reconfigured between launch and reentry to account for the different direction of acceleration?
1
Who released pre-launch TLE data for the Space Shuttle?
0
Why do these two Hubble Space Telescope star cameras point in nearly the same direction, and what's the other window for?
0
Falcon 9 altitude and speed during reentry burn?
6
Space shuttle orbital insertion altitude for ISS rendezvous?
3
Moment of inertia data for rocket stage?