Jia Yang, a Chinese engineer, announced that the Zhurong rover rolled cautiously, about 10 m in 3 days. One reason for this slow progress is the temperature that drops to -130 C and freezes the carbon dioxide in the atmosphere, covering the ground with a layer of hazardous dry ice.

As a remark, Viking II landed at 47.64° N and, regarding the temperatures it recorded, NASA said:

"the diurnal temperatures at the northern landing site (Viking Lander 2) during midwinter dust storms varied as little as 4 degrees C (7 degrees F) on some days. The lowest predawn temperature was -120 C (-184 F), about the frost point of carbon dioxide. A thin layer of water frost covered the ground around Viking Lander 2 each winter." (Viking Mission to Mars) 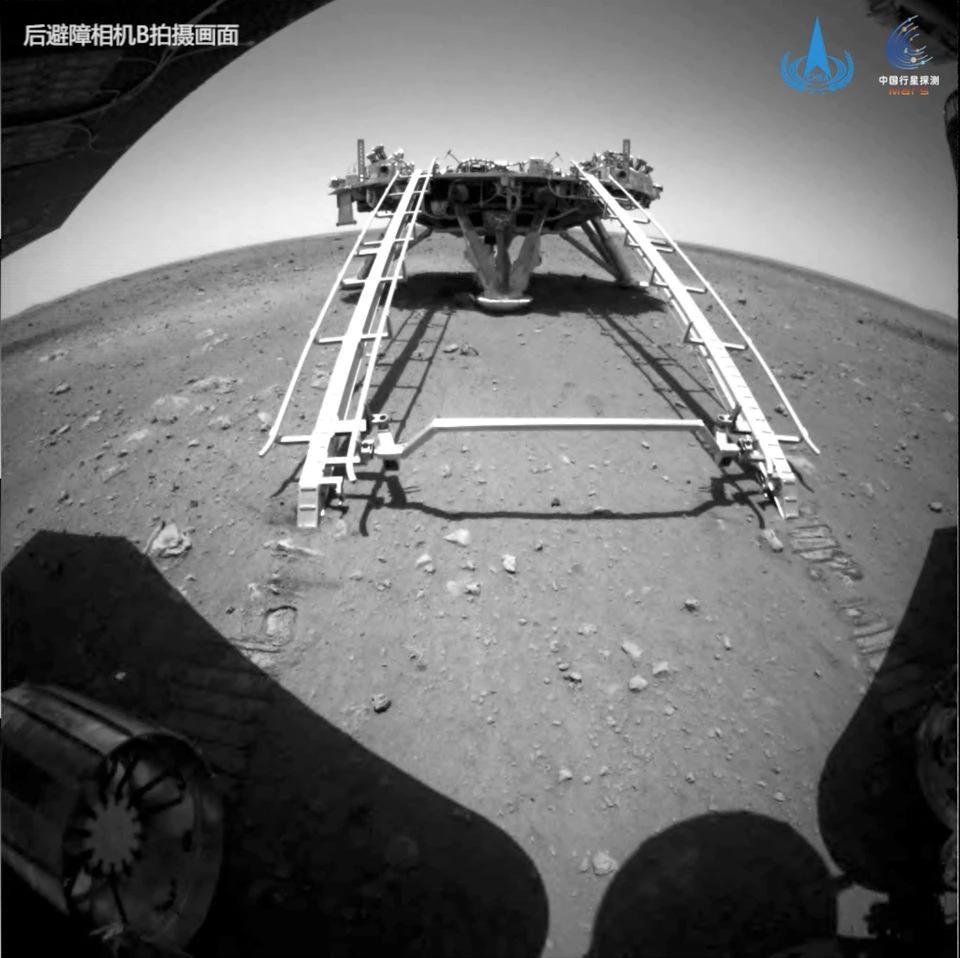 Chinese rover Zhurong of the Tianwen-1 mission drives down the ramp of the lander onto the surface of Mars, in this screenshot taken from a video released by China National Space Administration (CNSA) May 22, 2021.

Zhurong, named after a mythical Chinese god of fire, drove down to the surface of Mars at 10:40 a.m. Beijing time (0240 GMT), according to the rover's official Chinese social media account.

The 240-kg (530-pound) Zhurong, which has six scientific instruments including a high-resolution topography camera, will study the planet's surface soil and atmosphere.

Powered by solar energy, Zhurong will also look for signs of ancient life, including any subsurface water and ice, using a ground-penetrating radar during its 90-day exploration of the Martian surface.

Zhurong will move and stop in slow intervals, with each interval estimated to be just 10 metres (33 feet) over three days, according to the official China Space News.

"The slow progress of the rover was due to the limited understanding of the Martian environment, so a relatively conservative working mode was specially designed," Jia Yang, an engineer involved in the mission, told China Space News.

Jia said he would not rule out a faster pace in the later stage of the rover's mission, depending on its operational state at the time.

Jia said the rover was designed to be highly autonomous because the distance to Mars, at 320 million km (200 million miles), means a signal takes 40 minutes to travel both ways, posing a hurdle for real-time control of the rover.

Martian temperatures are also a problem, he said: a nighttime drop to minus 130 degrees Celsius (minus 200 degrees Fahrenheit) freezes carbon dioxide, covering the uneven ground with a layer of dry ice - a terrain risk for the rover.

Zhurong has an automated suspension system that can lift and lower its chassis by 60 centimetres (2 feet), the only rover with such a capability, according to China Space News.

The rover is covered by nano-aerogel plates to protect its body from the cold.

Dust storms could also affect the rover's ability to generate power through its solar panels, Jia said. To overcome this, the panel surface is made with a material that cannot be easily stained by dust and can easily shake dust off by vibration, he said.

The first images taken by the rover were released by the Chinese space agency on Wednesday.

The coordinates of the landing site are 109.9 degrees east and 25.1 degrees north, China Space News said.

Unfortunately Insight's subsurface thermal probe is not in place so we don't have data from Mars, but what it would look like is at say 50 or 100 cm below the surface the temperature was constant, but closer, within say a few centimeters of the top, the surface temperature would drop every night and rise every day.

So at night looking up you see mostly the cold of space, and looking down you see soil rapidly radiating away its warmth after sunset.

The table and text in the section Climate_of_Mars; Temperature shows that in any given month the surface air temperature cycles between about -70 C and 0 C. That's 203 to 273 Kelvin. If you are a flat rover, you are exposed on the bottom side to that, and much, much colder temperatures of the atmosphere and space on the top side.

During the day it's not so bad, but predawn before sunrise, you've been radiating your heat away into space all night, and are now very c-c-c-cold! If you have power in your batteries to run electrical heaters for your batteries and electronics, you will have survived one more night.

But if solar charging was insufficient yesterday due to dust on your panels or being awkwardly tilted north rather than south during the winter, your charge may have not been sufficient, your batteries will freeze, and you will have achieved EOM (end of mission).

For more, see answers to:

13
How cold is the Martian sky at night? Or the day for that matter?
4
Just how preferable are afternoons for flying Ingenuity? Why?
4
Could Ingenuity stay warmer at night by landing on (or near) Perseverance's RTG?
3
Have any Mars surface spacecraft had downward-pointing radiometers to measure the surface temperature? (not air temperature)
1
What is the science behind the variation of Mars' effective sky temperature with latitude and longitude? Why the "hot spot"?

20
Curiosity is still dirty! How will the ExoMARS Rover keep its solar panels dust-free and collecting sufficient power?
11
Why do you need a heat shield on Mars entry if the atmosphere is so thin?
3
Will MOXIE get clogged or chemically degraded by martian dust?
17
Are launch windows to Mars avoided if they result in landings during dust storm season?
11
Is there independent evidence that China landed a robot on Mars in May 2021?
3
Is the sky of Mars black (except its lower side toward the horizon)?