What DID NASA do with "the world's largest quantum computer"? (re question from 2013)

@TildalWave's 2013 question What does NASA plan to do with the world's largest quantum computer? has several answers, including one in a comment:

and of course something like that has never happened before.

Question: But eight years on, how did it go? What DID NASA Ames do with what would have at the time been the the world's largest quantum computer, a 512-qubit D-Wave Two™ quantum computer housed in the Quantum Artificial Intelligence Laboratory (QuAIL) at its NASA Advanced Supercomputing (NAS) facility partnering with the independent, nonprofit research corporation Universities Space Research Association (USRA)?

The Quantum Artificial Intelligence Lab was launched by NASA and Google circa May 2013, and here is the original blog post where this launch was announced by Hartmut Neven (leader of the quantum team at Google). There you can see, that the stated goal was to study how quantum computers might be used for machine learning. In reality, 512 qubits is nowhere near close enough to actually solve any real machine learning problem that a decades-old classical computer couldn't already do, so "machine learning" may have just been the buzz word used in order to get the approval to start this project, which was really to try out D-Wave's latest piece of hardware.

Of the papers associated with the 512-qubit D-Wave 2, published by authors from NASA, I cannot think of any that would be relevant to this question and this audience. The most significant paper published from NASA or Google, which used D-Wave hardware, was surely this one by Google, which used the D-Wave 2X. Interestingly, the words "NASA", "QuAIL" and "USRA" do not come up anywhere in the paper even though the actual D-Wave hardware that was used, was housed at NASA Ames. This indicates that the research performed and published in the paper, was done by Google researchers, and NASA's involvement was that the device (the D-Wave 2) used to perform the experiments was housed at NASA (something that I would expect to be mentioned in the "Acknowledgements" section, but not all authors have the same standards for making acknowledgements to others, and maybe there's some other reason why they didn't do it, of which I'm unaware). there's one other loose connection with NASA, which is that Vadim Smelyanskiy (the 6th out of the 8 authors) worked at NASA until at least 2014, before moving to Google.

The significance of that Google paper which I say was the most significant paper associated with the D-Wave hardware, can be summarized in this figure: 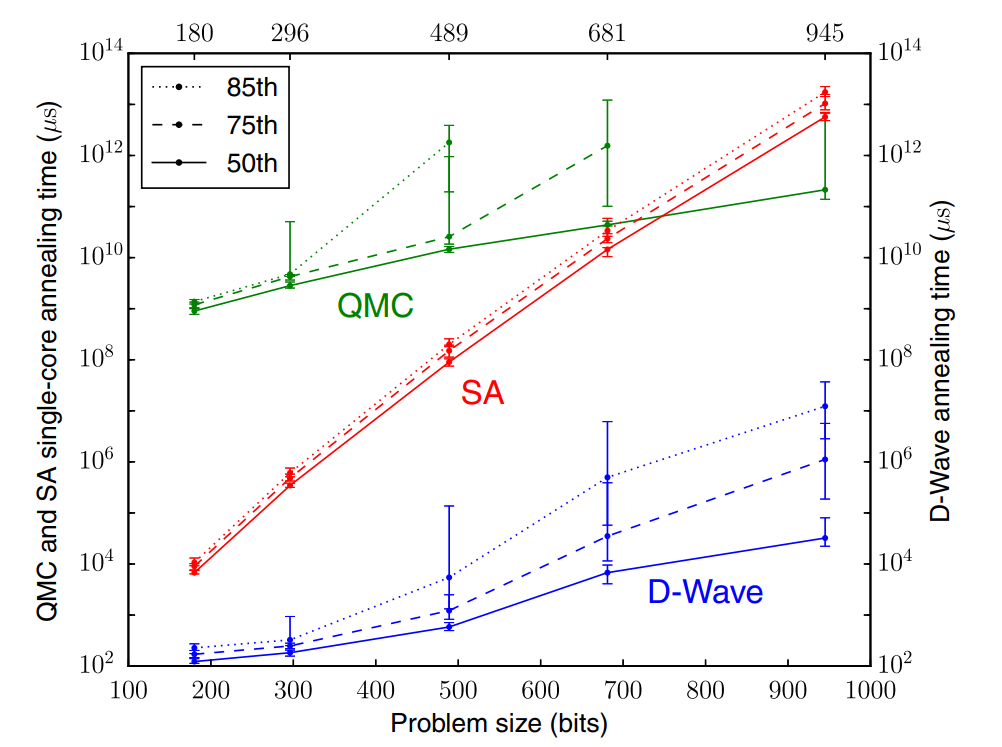 Here you can see that at a problem size of about 900 bits, the D-Wave hardware is finding the solution about 7 orders of magnitude faster than the classical computer running the QMC algorithm ($10^{11}$ vs $10^4$ micro-seconds runtime).

The classical computer was only using 1 CPU core, but even with 100% parallelization efficiency, you would need $10^7$ cores for the classical computer to match the speed of the D-Wave hardware here. At the APS conference in 2016, in a packed room, Hartmut Neven said that about $1 million was spent on the calculations in the green curve.

A follow-up paper, in which the 3rd author (out of 4) was working at NASA and all others were not, compared the D-Wave runtimes to some more classical-computer algorithms including "parallel tempering" which would use more than one CPU core in parallel, and found that the D-Wave hardware was still faster than any classical-computer algorithm up to a problem size of 625 bits (the square roots are an extremely clumsy typo by the authors, and should be ignored, please read $\sqrt{625}$ as just 625, not 25): 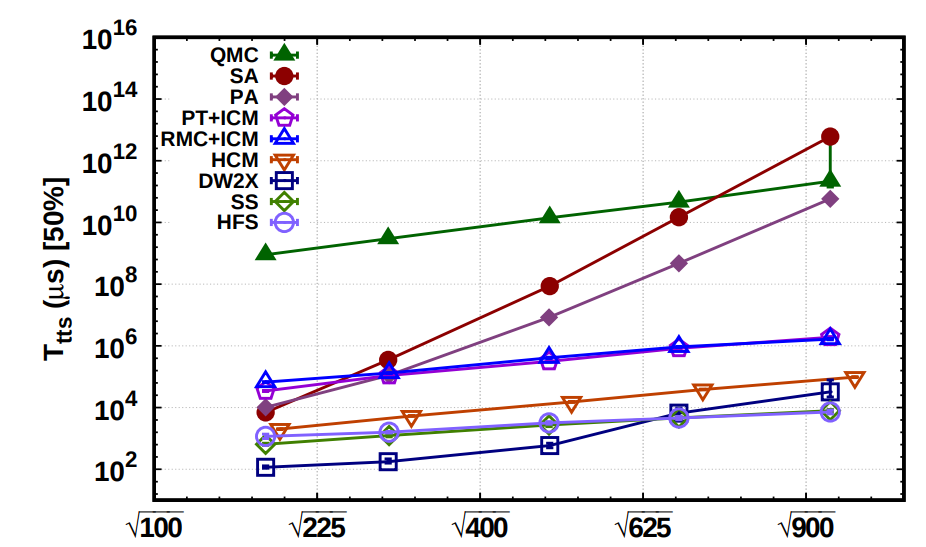 Beyond 625 bits, two of the classical algorithms beat the D-Wave hardware, but nowhere in the paper am I able to find the words "CPU" or "cores", and without knowing how many CPUs were used, the result means nothing. Since this paper was written within 1 month of the above Google paper getting published (August 2015), I would say the first one is the more reliable from that time period.

Finally, while I have described above what I believe to be the most significant result in the most significant paper associated with the D-Wave hardware that is housed at NASA, and it showed the D-Wave device to be $10^7$ times faster than the classical CPU, this answer would be incomplete without saying what the real-world consequences of this are. Unfortunately, this $10^7$ speed-up is only for a very specific problem, which is called "QUBO". I do not see any satisfactory answer to the question of whether QUBO has any real-world applications that cannot be solved more efficiently by other means, see these two questions from the Operations Research Stack Exchange:

Not the answer you're looking for? Browse other questions tagged nasa computing computer or ask your own question.

17
What does NASA plan to do with the world's largest quantum computer?
5
What is the numerical procedure to find the next closest approach between two bodies on keplerian orbits?

16
How did the US government shutdown of 2013 affect NASA operations?
17
What does NASA plan to do with the world's largest quantum computer?
32
Why did NASA set up a computing facility in Bermuda in the Mercury epoch?
2
Apollo guidance computer ROM addressing using the ROM bank register, what is the bank register size?
1
What's up with the "Apollo" computer on the ISS? How is it being used?
23
How did the Apollo guidance computer handle parity bit errors?
4
Did the IBM System/4 Pi computer have radiation-hardened versions for Skylab and Shuttle?
26
How many petaflops does it take to land on the moon? What does Artemis need with an Aitken?
8
Did NASA ever supply astronauts with canned food?
9
Did the RTCC ever “fail over” to the standby computer during a mission?