How did the kerosene-burning Black Arrow have transparent exhaust? (seems to just "hover" in photos)

Kerosene + LOX rockets have big, bright exhaust plumes, at least in the atmosphere; second stages are are a different matter: Why is the flame of the Falcon 9's 2nd stage (nearly) invisible?

But the kerosene burning Black Arrow looks spooky to me in that it seems to be hovering above the ground. Only after careful inspection can I detect a faint exhaust glow below it in the photo below.

Question: How did the kerosene-burning Black Arrow have transparent exhaust? What is it about the chemistry that makes the kerosene exhaust plume almost invisible?

From @PearsonArtPhoto's answer to Has any rocket been launched into orbit from a plain flat surface? 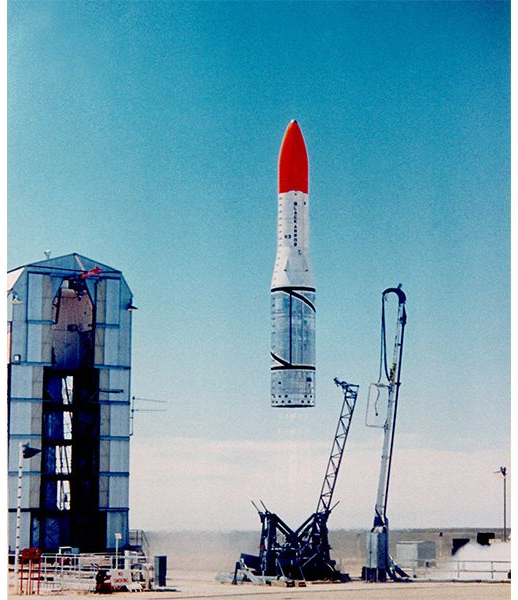 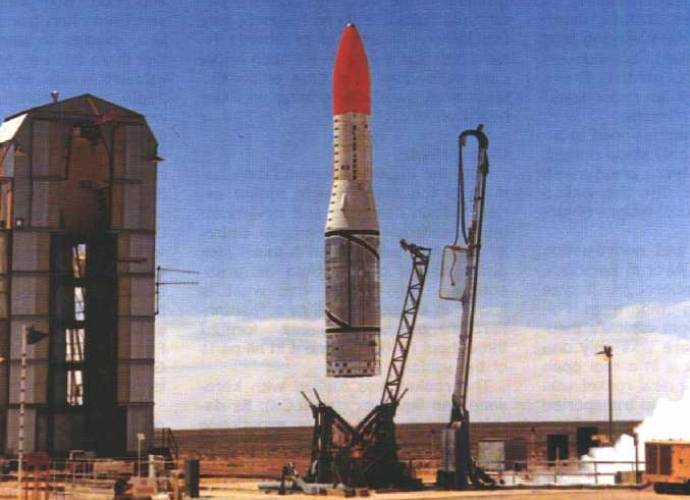 Typically, kerosene-LOX engines run fuel-rich, with an oxidizer:fuel mass ratio of about 2.5:1 (as compared to 3.5:1 for complete combustion), leaving significant amounts of unburned carbon soot in the exhaust, which glows yellow as it combusts with oxygen in the atmosphere.

The oxidizer:fuel mass ratio for complete combustion of kerosene with hydrogen peroxide is a little over 7:1 (varying with the exact formulation of the fuel).

The Gamma-8 engines of the Black Arrow, however, ran leaner than most kerosene engines, with a oxidizer mass ratio of 8:1. The oxidizer was 85% concentration hydrogen peroxide (i.e. 15% water), so the actual ratio would still be slightly fuel-rich, but there would be much less unburned carbon in the exhaust compared to most kerosene-LOX engines, hence little external combustion, and no bright yellow plume.

I think Wikipedia's Bristol Siddeley Gamma; Advantages of kerosene / peroxide engines can shed some light on the missing light.

The combustion formula of kerosene and hydrogen peroxide is

and you can see that the exhaust is mostly water, which results in a clean, transparent flame and increases thrust performance because of its low molecular mass.

On the other hand, LOX and Kerosene is different because the combustion formula is

with much less water as exhaust.

Also, the space startup Skyrora is using the same combination as the Black Arrow, yet their rocket does not burn as cleanly. I think this is due to the black arrow having an 8:1 oxidizer-fuel mass ratio, while Skyrora is using a 6:1 ratio. This is explained in more detail in Russell's answer.

Not the answer you're looking for? Browse other questions tagged chemistry exhaust visibility-of-spacecraft black-arrow or ask your own question.

18
Why is the flame of the Falcon 9's 2nd stage (nearly) invisible?
7
Has any rocket been launched into orbit from a plain flat surface?
9
How many satellites were orbited from Australia in total?
8
What is this South Korean rocket and why does it have separate yellow and blue exhaust plumes?
9
Why did Black Arrow have a tail skirt?

10
What is the cause of the blue light from LH2/LOX rocket engines?
0
How does the camera make the exhaust of the Electron's RP-1/LOX exhaust transparent?
9
Why did Black Arrow have a tail skirt?