Why would a Deep Space Network antenna send up a carrier signal without any data?

Why would a Deep Space Network antenna send up a carrier signal to SOHO without any data? Source: https://eyes.nasa.gov/dsn/dsn.html . Is that some calibration process? 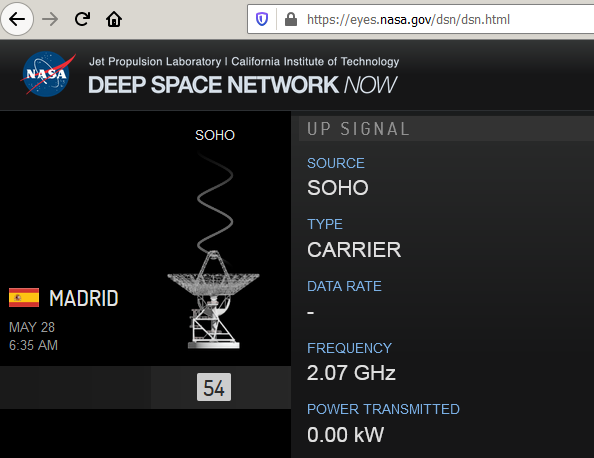 Why would a Deep Space Network antenna send up a carrier signal without any data?

One general possibility (but see the more likely explanation for this particular case below!)

SOHO is in a halo orbit around Sun-Earth L1: it circles the Lagrange point roughly every 5 months.

Like all spacecraft in halo orbits around L1 or L2 points, SOHO needs to do regular orbital station keeping to keep from drifting off along one of the unstable manifolds.

If it doesn't do anything, then natural perturbations of all kinds (the Earth's orbit isn't perfectly circular to begin with so can't have pure halo orbits, there's Venus' tug, it's not exactly where it should be, etc.) will pull it either towards the Sun or towards the Earth in the rotating Sun-Earth frame and it will start spiraling away from it's halo in one of those directions.

So DSN sends a carrier that might not have data or commands on it, but is still modulated with a Gold code and SOHO's coherent transponder shifts the frequency with a phased locked loop and sends it right back to DSN on a different but coherently-shifted frequency.

Back on Earth the timing of the coded modulation is mathematically correlated with the code that's sent in order to determine both the absolute delay and the Doppler shift. This is called a range-rate measurement.

This gives them the distance to a very high accuracy (probably a few meters or less) and the relative velocity (to a millimeter per second or less).

After a few tens of minutes or a few hours of data collection, they have a very accurate data set from which they can calculate how far SOHO has drifted from where it would be to be the most stable, and they'll calculate a small station keeping burn either directly towards the Sun (typically) by one set of thrusters, or towards the Earth (less typically) with the other set.

Since SOHO is supposed to look right at the Sun, it maintains its attitude so that these thrusters are always pointed pretty much exactly in the right directions.

You can read more about that in Section II. STATIONKEEPING OF THE SOHO HALO ORBIT; General Approach in The SOHO Mission L1 Halo Orbit Recovery From the Attitude Control Anomalies of 1998 and SOHO’s Recovery – An Unprecedented Success Story F.C. Vandenbussche both linked in answers to Is this what station keeping maneuvers look like, or just glitches in data? (SOHO via Horizons).

The other possibility (The transmitter power is 0 kW!) 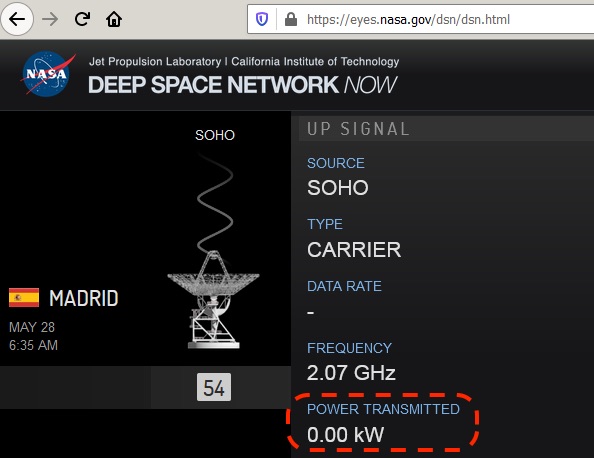 Calibration is an obvious reason: either for accurately fixing the directional characteristics, or to ensure the receiver and transmitter are on the correct frequency. A carrier signal gives a "pure" signal which makes this sort of thing relatively easy to measure.

And until calibration is complete, you don't want to potentially lose data, so no point sending any until you are sure everything is working optimally.

As @DrSheldon also commented - a couple of hours later, data started being transmitted in both directions - my assumption would be that was after calibration was complete.

Not the answer you're looking for? Browse other questions tagged soho or ask your own question.

38
Are there any space probes or landers which regained communication after being lost?
15
Is this what station keeping maneuvers look like, or just glitches in data? (SOHO via Horizons)
9
How would you identify when an object in a Lissajous orbit needs station keeping?
6
What is the required burn to keep a satellite at a Lagrangian point?

2
How (the heck) does SOHO's SWAN camera image the entire 4π sr celestial sphere?