Engine failure: how to detect?

I'm assuming a drop below 90% rated thrust would indicate an engine failure.

And I want to just say "got it, monitor thrust and trigger launch abort if two below 90 %."

But in practical terms... how would you monitor engine thrust? Just take your accelerometer's reading and multiply it by the current mass estimate? It's one way, but how was it actually done? Anybody?

Apollo-era engines had redundant THRUST OK chamber-pressure-actuated switches that toggled to ON at a certain value of the chamber pressure (for the F-1, it was 90% of nominal).

1-130. Engine mainstage is that period of engine operation that is initiated when the engine has attained 90 percent of its rated thrust. Mainstage is signalled by the actuation of the thrust OK pressure switches. 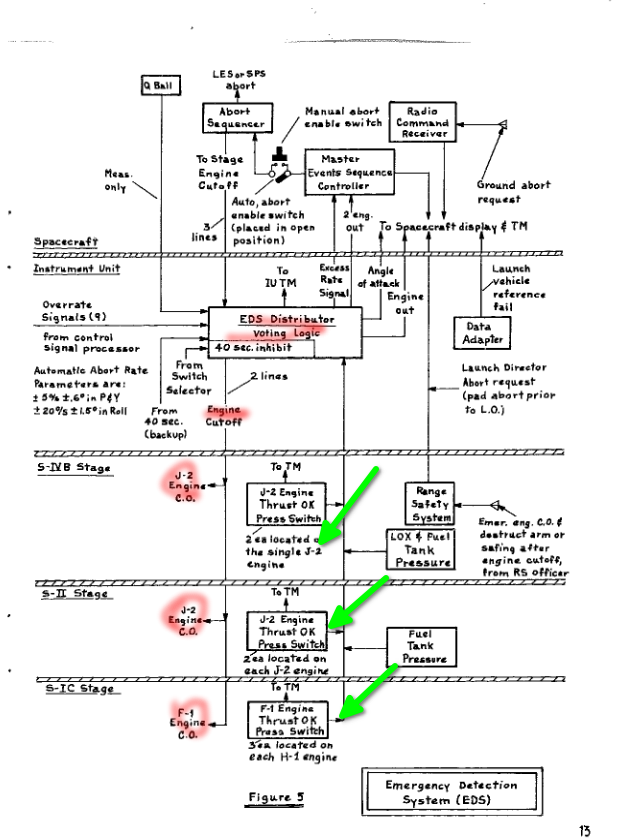 Modern engines have engine controller computers that monitor a number of parameters. As David Hammen writes in his answer it would be wise to pick a variety of parameters to use for the shutdown decision. The only in-flight engine failure shutdown in the shuttle program was caused by bad sensors. In that case there were multiple sensors, but all checking the same parameter, and all with the same design flaw.

Just take your accelerometer's reading and multiply it by the current mass estimate?

That is not a good idea. I'll start with launch, where using sensed acceleration wouldn't work at all. Launch vehicles are held down by hold-down clamps until engine ignition is confirmed. Most launch vehicles shut themselves down if ignition is not confirmed. An accelerometer is useless for this because the hold-down clamps prevent the vehicle from accelerating upward.

Once a vehicle has launched, accelerometer readings can provide clues regarding main engine failures, but only clues. The propulsion system / thruster sensors that are need to confirm ignition provide better clues, so long as those sensors haven't failed. The solution is to use reliable sensors that are unlikely to fail, and redundant sensors in case one does fail.

16
How do you confirm ignition in the combustion chamber of a rocket?
8
What do hold-down clamps… clamp exactly?
2
Why not turn off the main engines while using the launch escape system on liquid fuelled engines?
6
What are the various ways that rockets measure the instantaneous thrust of each engine?

12
Why the huge thrust difference between a Sea level and Vacuum J-2 engine?
3
Where does the turbine exhaust go on the Saturn V F1 engine?
5
What is a rocket engine “burp”, and why does it happen?
10
What was the maximum thrust of the Rocketdyne F-1 engine?
3
Is it possible to estimate the nozzle characteristics of the Rocketdyne HG3 engine?
7
How had the Saturn V lifting capacity changed throughout the Apollo program?
5
Apollo 6, reason for premature engine shutdown of two engines of second stage of Saturn V?
1
Kerosene engine film cooling
9
was Saturn V engine J-2 throttleable?
3
Ullage control with single engine stage?