Why can solid rockets be both the skinniest and most spherical launch vehicles while liquid fuel rockets have a more limited range of aspect ratios?

Question: Why can solid rockets be both the skinniest and most spherical launch vehicles while liquid fuel rockets have a more limited range of aspect ratios? Are there fundamental engineering principles at work? Simple physics? Or is the devil in the details?

This answer to Most noodle-like (highest aspect ratio) orbital launch vehicle ever? 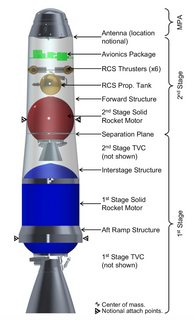 The first stage of this Mars launch vehicle is pretty squat and is just as spherical as a spherical cow. Source: Spaceflight Now's NASA narrows design for rocket to launch samples off of Mars

The squat end of the spectrum has little to do with solids versus liquids and everything to do with aerodynamics. Spherical tankage is most weight-efficient, so you'd expect squat stages in cases where aerodynamics don't dominate such as your Mars Ascent Vehicle (flying where atmospheric drag is on the order of 1% what it is for Earth ascent) or the Apollo LM. Since a solid rocket motor has fuel and oxidizer mixed together in a single container, spherical stages are not unknown, but some liquid stages have side-by-side (Apollo LM, Fregat) or even nested (Briz-M) tankage, for an overall squatter-than-spherical aspect ratio.

At the skinny end of the spectrum, sounding rockets often start with a higher thrust-to-weight ratio than orbital rockets, and solids burn off mass faster than liquids (because of their poorer specific impulse), so solid-motor sounding rockets in particular will hit higher speeds at lower altitudes, meaning the tradeoff between thin-aspect low-drag designs and squat-aspect mass-efficient designs is slightly different.

Solids can probably be built to slightly skinnier extremes than liquids, as SRM casings are generally thicker than liquid fuel tanks, and the fuel grain may provide some structural strength.

Not the answer you're looking for? Browse other questions tagged engine-design physics liquid-fuel launch-vehicle srb or ask your own question.

11
What barge route did the Saturn S-II take from California to Florida?
6
How do spherical SRB's compare to long skinny ones? What do their thrust curves look like?
3
Most noodle-like (highest aspect ratio) orbital launch vehicle ever?

7
To what extent, if any, does the exterior paint color of a launch vehicle affect its propellant & vehicle thermal management?
10
How are SRBs and solid rocket motors transported safely? Do they ever end up on trucks driven down public highways?
6
How do spherical SRB's compare to long skinny ones? What do their thrust curves look like?
3
Most noodle-like (highest aspect ratio) orbital launch vehicle ever?