What's the path of something dropped from a space elevator

What sort of paths would payloads follow after being released from a space elevator such as the one described in Clarke's Fountains of Paradise?

The elevator makes a revolution each sidereal day. The angular velocity (aka ω) is 2 π radians/sidereal day.

The speed of an object in uniform circular motion is ωr. In this case r is the point’s distance from earth’s center. So called centrifugal acceleration is $ω^2r$. This is a push away from the earth.

Besides $ω^2r$, there is another acceleration in the opposite direction: gravity. This acceleration is $GM/r^2$. When r=42,164 kilometers, $ω^2r$ and $GM/r^2$ exactly cancel. This is the orbit radius of geosynchronous satellites.

Since the velocity vector is perpendicular to the position vector, r is either the perigee or apogee of the orbit. If released below geosynch, it’s apogee. If released above geosynch r is the perigee.

Knowing the eccentricities that correspond to a specific r, we can draw orbits of payloads released from various locations on the elevator: 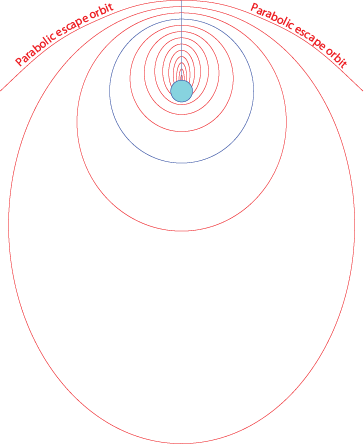 When r=1, the orbit is circular. I colored this orbit blue.

You may notice I cut the illustration off at $r=2^{1/3}$ geosynch lengths. As r approaches $2^{1/3}$, e approaches 2-1. When e reaches 1, the orbit is a parabola. When e exceeds 1, the orbit is a hyperbola. My argument rests on regarding specific angular momentum as twice an elliptical orbit’s area over the orbital period. For parabolas and hyperbolas those quantities aren’t defined.