Needed height from the release of a space elevator to get a stable elliptical orbit?

As we know, something released from around 36000 km height from a space elevator will remain in geostationary orbit around the Earth.

How high do we need to release something from a space elevator to reach that?

To clarify, what is the height at which you could release an object from a space elevator and achieve an orbit with perigee >= Re + 500 km (where Re is the earth radius)?

The velocity of the space elevator varies linearly along its length, with the velocity at GEO altitude ($R_{GEO}$) equal to GEO orbital velocity ($V_{GEO} = \sqrt{\mu/R_g}$). So for a position $r$ on the elevator:

Orbital velocity as a function of radius $r$ is given by:

where $a$ is the semi-major axis

The release point will be the apogee of the achieved orbit, so we can re-write the equations as such:

After some algebra, you can solve for $R_{perigee}$ as a function of $R_{apogee}$

Note that this is the radius from the earth center, not the height, as was used in the original question. Other quantities used: 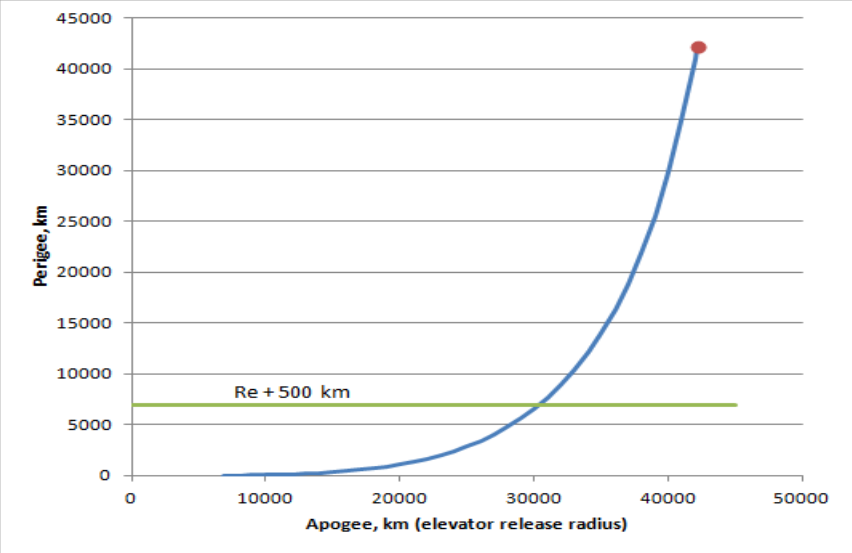 Not the answer you're looking for? Browse other questions tagged orbital-mechanics geostationary space-elevator or ask your own question.

2
Space elevator: Is there some way you could make one to a low earth orbit?